You are in : All News > Remilk secures self-affirmed GRAS for non-animal, real dairy protein

08 Jun 2022 --- Remilk non-animal dairy proteins have been granted generally recognized as safe (GRAS) approval based on US Food and Drug Administration (FDA) specifications, making it suitable for human consumption in the US.

“Regulatory approval in the US is great news for the dairy product manufacturers and consumers seeking non-animal real-dairy products. We are working diligently with regulators around the world to offer Remilk products to consumers in other countries,” says Aviv Wolff, CEO and co-founder, Remilk.

“We believe that the first regulators to adapt approval processes to alternative protein production systems will be those who benefit most from the availability of a stable, reliable supply of nutritious, affordable, sustainable foods in their countries,” Wolff outlines.

Safe for consumption claims
GRAS status indicates that Remilk protein is considered safe for consumption in food and beverages, which means it can be used by manufacturers to make non-animal varieties of popular consumer products such as ice cream, yogurt, and cream cheese.

Remilk proteins are bio-equivalent to their traditional counterparts and dairy produced using them is indistinguishable in taste and function from conventional dairy, claims the company. 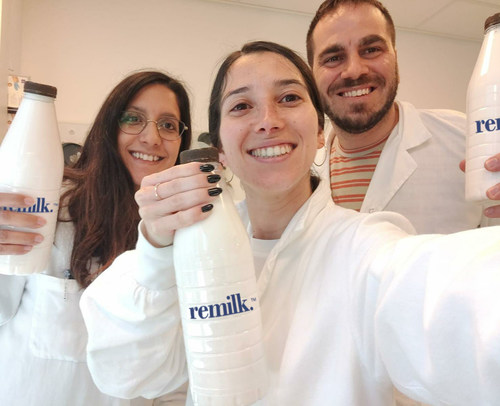 Non-animal dairy cleared for consumption
Remilk protein is identical to cow-based milk protein but produced without a single animal cell.   With this regulatory clearance, the company can begin selling to US consumer packaged goods, with sales anticipated to begin in the coming quarters.

According to a recent study conducted by YouGov on behalf of Remilk, 37% of Americans say they avoid products made with cow’s milk, with nearly 50% citing health and wellness as primary drivers, followed by environmental (33%) and animal welfare concerns.

Meanwhile, Imagindairy unveiled its fast-to-market functional animal-free dairy proteins. The company is creating true milk proteins that are indistinguishable from the real thing via a natural process of precision fermentation.

Color supplier GNT has secured US Food and Drug Administration (FDA) approval for the use of spirulina extract in beverages, enabling manufacturers to achieve vibrant... Read More

Kendamil and Danone are set to export infant formula products to the US which continues to struggle with shortages. Announcing Operation Fly Formula 21 and 22, the Biden... Read More