You are in : All News > Dairy storm: Milk sector weathers shortages and labor losses amid historic price inflation

13 Jul 2022 --- Consumers’ thirst for dairy – sustained even amid acute inflation levels – has been met with dwindling global stocks that are set to squeeze prices further in the sector. The Food and Agriculture Organization of the United Nations (FAO) highlights that global dairy prices are up 24.9% year-on-year, climbing to an all-time-high this June.

The EU annual milk collection is down 0.6% this year, with the European Commission (EC) underscoring that “despite rising consumer prices, EU dairy consumption could grow”.

“The lower grass quality and lower feed use due to availability and cost are likely also to decrease the milk fat and protein content, thus reducing the availability of milk solids for processing even further,” notes the Commission.

Meanwhile in the UK, striking labor shortages are diminishing the capabilities of dairy farms to increase their production.

“Addressing the labor shortage and the implications this could have for food security is vitally important,” says Ash Amirahmada, managing director at Arla’s UK.

“If we don’t act now, the current shortages of people will only worsen, jeopardizing production on farms, undermining our food security and further fuelling higher prices for consumers,” he continues.

Similarly, greenhouse farms in the country are suffering from the same labor shortages.

FAO highlights that dairy prices are up 24.9% year-on-year, reaching its all-time high this June. FAO warns of a global problem
A FAO report on inflation detailed that Europe has a “low milk output” and that the global dairy sector is seeing a “persistent global supply tightness.”

Dairy prices are heating up faster than any other food commodity analyzed by FAO, while food staples like vegetable oils have already peaked after reaching sky-high price records.

“For dairy, the input costs for milk production and milk processing are skyrocketing, also other commodities have reached higher levels even if recently certain price corrections have been observed,” explains Anton.

“Any cooling of inflation or outright decline in prices [for food raw materials] is largely dictated by the weaker demand appetite; supplies remain historically low and we do not see prices reverting to their pre-covid levels any time soon,” a spokesperson from Rabobank tells FoodIngredientsFirst.

Until last April, dairy player Kerry had pushed its prices up by 18.7% (this Q1) due to an already constrained global supply dynamic; further increasing the base pay for its milk supplied both in May and June.

Arla Foods increases milk prices
Danish-Swedish multinational cooperative Arla – the UK’s largest dairy producer – has increased its milk prices for five months in a row (US$0.02 in March, US$0.05 in April, US$0.04 in May, US$0.05 in June and US$0.02 in July).

“Over the last few months, we, as farmer-owners, have been pleased to see a significant increase in our farmgate milk price for both conventional and organic milk,” says Arthur Fearnall, Arla Foods amba board director.

“This is much-needed as our on-farm costs have seen drastic inflation in recent months. Commodity prices, which have been climbing, have now begun to stabilize although remaining at a high level and we continue to see a decline in the overall milk supply across the EU. Nonetheless, the outlook for the future is stable,” outlines Fearnall.

The business is also warning of the chronic shortage “of suitably-qualified farm workers,” which, according to them, is contributing to food price inflation. Milk volumes are down 3% compared to 2021, and four out of five farmers looking for workers have received “very few or zero applications from people with the right experience or qualification”, according to the company.

Arla Foods blames a combination of the loss of free movement of workers and the aftermath of the pandemic as the top contributing factors.

“Shortage of workforce on farms is less a worry than the low number of young farmers stepping in on dairy farms,” adds Anton. 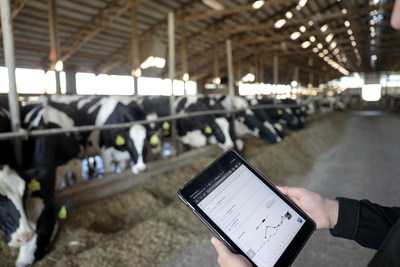 Milk Moovement aims to reduce dairy food waste and profit loss by advancing tech in the supply chains of the dairy sector. (Credit: Milk Moovement).
The Goods and Service Tax Council of India has announced a 5% increase in taxes on dairy items like cheese, buttermilk or pre-labeled curd. Meanwhile, dairy machinery also saw a tax increase of 6%, reaching 18%.

India, the world’s largest milk producer, exports minimal quantities of dairy and dairy products given its high domestic consumption driven by a third of its population being under 14 years of age, according to data from the US Department of Agriculture (USDA).

“Most Indians consume dairy products. Dairy alternatives such as oat and almond milk, in addition to camel and goat milk, are primarily a newer urban phenomenon. Sales of dairy alternatives are largely in a nascent stage, finding a market largely among health-conscious consumers and those seeking greater quality and convenience products,” according to the USDA.

New Zealand claims that Canada is manipulating TRQ tariffs to prevent low-tariffed milk from entering the country, claiming that it is breaching the Trans-Pacific Partnership treaty agreement (TPP).

This July, New Zealand brokered a beneficial free trade deal with the EU, which allows 91% of New Zealand’s current exports to the EU to arrive free of tariffs.

The UK is facing severe labor shortages in the farming sector due to Brexit and aftermaths of the COVID-19 pandemic.In a previous interview with FoodIngredientsFirst, Alexander Anton, secretary-general of Euromilk concluded that it was a bad deal for EU producers.

“We cannot see any gain that would be, by any means, reasonable in relation to the impact of the increased market pressure on the EU dairy markets.”

Milk Moovement, announced yesterday that it has bagged US$20 million in a Series A round of funding with the aim to create a major digital transformation in the sector and an ultimate objective of decreasing food waste and its subsequent loss of profits.

“The software brings all stakeholders together in real-time, which allows for clarity and visibility on key elements of our operations,” says Jafar Shahwan, VP of supply chain at California Dairies and one of Milk Movement's customers.

“Real-time data transparency is critical for managing perishables and provides tremendous benefit to all the constituents in the dairy value chain,” underscores Carle Stenmark, general partner at VMG Catalyst, the leading company in the funding round.

Back in the UK, shops are protecting cheese from shoplifters with security boxes, including GPS protection.

“Co-op has been involved in a small-scale trial of new packaging for higher-value products such as meat for several years, with the additional security providing a further deterrent if a store locally experiences shoplifting issues,” says a spokesperson of Co-op.