You are in : All News > Dairy-free reign: Parmela Creamery raises over US$1m in seed funding of plant-based cheeses 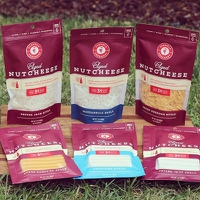 24 Jun 2019 --- Parmela Creamery, specializing in cultured plant-based cheeses, has raised over US$1 million in a Series Seed financing round, led by investors 25Madison, Gather Ventures and Luke Abbott. The funding will be put towards strengthening the brand’s marketing efforts and ongoing innovation projects in vegan dairy alternatives. The company distinguishes its dairy-free cashew milk cheeses as being made using traditional culturing and aging, which allows the products to develop their own authentic, rich and creamy flavors, appealing to vegetarians, flexitarians, plant-based consumers. Parmela's range of cheeses include meltable slices, meltable shreds, block forms, spreadable forms, nacho cheeses and alfredo sauces.

The plant-based foods industry is seeing tremendous growth, notes Steven Price, CEO and Co-Founder of 25Madison. “Parmela will continue to focus on its craft process, superior ingredients and sustainability. We partnered with Ry, Co-Founder Laurice and the Parmela team to accelerate their next phase of growth.”

“Our vision at Parmela is to honor the heritage of traditional cheese making while supporting a healthier, sustainable future. These partners offer the operating experience and deep connections to help deliver on this vision at scale,” says Ry Salomone, Co-Founder of Parmela.

Surging dairy alternatives
A strong rise in dairy alternatives, such as vegan milk, yogurts and cheeses, has been one of the prominent outcomes of the plant-based boom this year. Innova Market Insights reports that the space for dairy-free products has enjoyed a 17 percent CAGR (Global, 2013-2017). The market researcher hotly tipped “The Plant Kingdom” as the second of its top trends for 2019, indicating strong potential for NPD in line with this movement.

Between 2013 and 2017, soy continued to be the top ingredient for plant-based dairy alternative drinks, however, market penetration of soy-based products has reportedly decreased this year. Almonds and oats have also shown strong growth over the years, with a CAGR of 39 percent and 36 percent, respectively (2013-2017).

The US market for dairy alternatives, in particular, is buoyant. According to an Innova Market Insights’ consumer research, one in three US consumers have increased their consumption of plant-based milk/yogurt in the two years towards the end of 2017. This year, product developers are reaching out to meet this demand and this market dynamic has led to work from major players in gaining a piece of the proverbial pie, in the alternatives space. A telling development reflecting ongoing interest from the US dairy industry was the July 2018 announcement that Dean Foods was to take a majority share in Good Karma Foods, known for its market-leading range of flaxseed-based milk and yogurt alternatives. The Good Karma range includes Original and Unsweetened Flaxmilks with omega 3 and protein, as well as dairy-free yogurts.

DuPont’s Danisco is now offering a line of VEGE cultures – a new portfolio of cultures specially formulated for the vegan fermented products market. Danisco VEGE cultures have been developed for a wide-ranging variety of plant-based raw materials, such as soy, coconut, nuts, oat, maize, rice, fruits and vegetables, to satisfy consumer taste and texture expectation. And as consumers continue to make health and wellness part of their daily routines, with digestive health remaining a prime concern, the company has recently extended its VEGE cultures portfolio with the addition of gut health-promoting HOWARU Dophilus VG and HOWARU Bifido VG strains.

Global consumers are demanding indulgence, even as they look more carefully at their food choices and how they might affect the planet. With a renewed focus on personal... Read More