You are in : All News > Coca-Cola Energy arrives: Natural halo evolution underscored by debut in two European markets 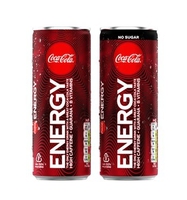 01 Apr 2019 --- The Coca-Cola Company has unveiled its first ever energy drink. Coca-Cola Energy will debut this week in Spain and Hungary before a potential roll-out to other markets. The new product contains caffeine from naturally-derived sources, guarana extracts, B vitamins and no taurine. A no-sugar, no-calorie option will also available, with both versions offered in 250ml cans. Launching the energy drink under the Coke brand is part of the company’s pledge to branch out from its traditional and core fizzy drinks category. It is about offering beverages that fit a wide variety of lifestyle and functionality demands, alongside becoming a “total beverage company.” A beverage giant like Coca-Cola moving into this space is particularly profound, as it underscores the evolution of the energy drinks landscape.

Aimed at 18-35-year-old consumers, Coca-Cola Energy will put the brand in direct competition with market leaders in the energy drinks space, including Red Bull, Lucozade and Monster Energy (which Coca-Cola partly owns as the company’s biggest shareholder).

The unveiling of Coca Cola Energy comes shortly after market researcher Innova Market Insights notes how the energy drink category is evolving, particularly as NPD moves away from caffeine and taurine-based beverages. While the standard model of high-energy, high-intensity entertainment marketing has its place, competition is targeting a more mature consumer. Cleaner labels and clean energy are concepts that are on the move and organic is making inroads. The company has previously forecast more marriages of energy and hydration “as energy beverages transform into healthful additions to the diet.”

Innova Market Insights data also shows that in 2018, 11 percent of global food & beverage launches tracked with energy ingredients featured guarana. According to the market researcher, energy drinks is now the smallest of the ten soft drinks subcategories in terms of NPD, with just 2 percent of the H1 2018 total. Numbers have fallen fairly consistently over the past five years. They now stand at less than half the 2013 level, reflecting limited innovation opportunities in a saturated market dominated by a number of very large multinational brands. Concerns over caffeine, taurine and sugar content have also inhibited developments.

The European launch of Coca-Cola Energy taps into demand for energy drinks, one of the fastest-growing categories in the beverage sector, according to Javier Meza, Global Chief Marketing Officer of Sparkling Beverages at The Coca-Cola Company.

The Coca-Cola Company has unveiled its first ever energy drink; Coca-Cola energy which will debut this week in Spain and Hungary before a potential roll-out to other markets.We are always looking for ways to expand our products and bring people the drinks they want. And, energy is one of the fastest-growing categories in our industry,” he says. “Coca-Cola Energy was developed by listening to what people told us they want from a Coca-Cola Energy drink. It has a great Coca-Cola taste that people know and love, along with caffeine from naturally-derived sources. Coca-Cola Energy gives people an option to have an energy drink that fits their specific lifestyles and preferences.”

Designed to complement upbeat and busy lives, Coca-Cola Energy continues to evolve the company’s portfolio. The Coca-Cola Company has announced a number of deals and acquisitions over the past months.

In September 2018, it acquired Organic & Raw Trading Co., the maker of Australian kombucha brand MOJO. This signaled the first time that Coca-Cola had acquired full ownership of a brand in the kombucha category.

Last month, Coca-Cola debuted Odwalla’s Smoobucha in stores across the US, after having unveiled the line of products at Natural Products Expo in California. The beverage fuses smoothies and kombucha – an ancient Chinese fermented tea drink – creating a taste that hopes to entice consumers who may be wary of the “boldness” of the kombucha flavor.

Coca-Cola also gained a major footprint in the coffee category when it reached a definitive agreement to acquire UK-headquartered coffee chain Costa Limited for £3.9 billion (approximately US$5.1 billion) last summer. In August 2018, Coca-Cola also acquired a minority ownership stake in Bodyarmor – a fast-growing line of premium sports performance and hydration beverages. This move signaled Coca-Cola’s challenge to the strong market player Gatorade, which is owned by Pepsi.

From organic teas to juices, to enhanced waters, to ready-to-drink coffees, to new variants of Coca-Cola, the launch of Coca-Cola Energy is the latest articulation of this strategy, Meza notes.

Meza says there are plans to add other markets in the future. “We plan to introduce Coca-Cola Energy in additional countries through 2019 and 2020,” he says. “We will confirm plans and timings if a decision is made to launch this new brand in a certain market.”

A visual identity and marketing campaign will also support the launch of Coca-Cola Energy. The new brand will be promoted in line with The Coca-Cola Company’s responsible marketing guidelines. These include, in line with UNESDA (European Soft Drink Association) guidelines, no sampling in proximity to primary and secondary schools and never promoting mixing with alcohol.

The beverage space is brimming with new iterations of spirits and ready-to-drink formats, which include launches of hybrid flavor profiles and licensing deals with... Read More