You are in : All News > Burger King to roll out Impossible Whopper across the US by end of year

Following trial success in St. Louis, Burger King set to launch the plant-based burger throughout the US 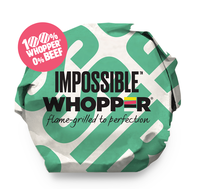 30 Apr 2019 --- Burger King has revealed plans to roll out its plant-based Impossible Whopper throughout the US, following the successful trial of the burger in 59 stores in St Louis earlier this month. The fast-food giant plans to make the Impossible Whopper available in more US regions throughout the summer months and nationwide by the end of 2019, if the reception is positive.

The fast-food chain initially trialed the Impossible Whopper in 59 locations in and around St. Louis, Missouri, which began on April 1. “The Impossible Whopper test in St. Louis went well and as a result, there are plans to extend testing into additional markets in the very near future,” a Burger King Representative said in a statement this week.

Earlier in the week, the burger chain said that the St. Louis test showed “encouraging results” and that sales of the Impossible Whopper are also “complementing traditional Whopper purchases.”

According to a video made by Burger King and published on March 31, the chain conducted a test to examine consumer reception. “We conducted an experiment to evaluate how well Whopper fans know their beloved Whopper,” says the company. “The people you will see here are real people and these are their real reactions.”

“People on my team who know the Whopper inside and out, they try it and they struggle to differentiate which one is which,” Burger King’s Chief Marketing Officer, Fernando Machado, told the New York Times.

“I have high expectations that it’s going to be big business, not just a niche product. We see there is no compromise on taste and lots of upside on things that people seem to be looking for.”

Curiosity over the Impossible Burger is not expected to die down – at least initially. Public concern over the health and environmental impacts of meat has increased sales of plant-based meat alternatives around the globe.

Global meat alternatives have moved far beyond the niche vegetarian and vegan domain to encompass a much broader base of flexitarians, as the quality improves to replicate real meat. According to data from Innova Market Insights, meat substitutes accounted for 11 percent of new meat product launches (meat, poultry and meat substitutes) reported in Europe in 2018 (Jan-Sep), up from 9 percent in 2013. The global picture shows stronger growth still, with 14 percent of meat launches in the first nine months of 2018 being meat alternatives. This compares with 6 percent in 2013.

As consumers reduce their meat intake, food companies are rushing to compete with plant-based alternatives. Just yesterday, McDonald’s Germany revealed the debut of a vegan burger, made with Nestlé’s plant-based Incredible Burger made from soy and wheat proteins. According to McDonald’s, The Big Vegan TS is a “meatless alternative with the real McDonald’s taste.”

Based in Redwood City, California, Impossible Foods uses modern science and technology to create wholesome and nutritious food, restore natural ecosystems and feed a growing population sustainably. The company makes meat directly from plants – with a much smaller environmental footprint than meat from animals.

The Impossible Burger is available in over 5,000 locations in the US, including Umami Burger, Bareburger, Wahlburgers, The Counter, Fatburger and Gott’s, as well as White Castle, America’s original fast food restaurant and home to the Impossible Slider, celebrated as one of America’s best burgers. And now, the rollout in Burger King chains is also tipped to be a success in the plant-based space.