15 Oct 2021 --- A coalition of 25 breweries from across the UK and Ireland have kick started a campaign today calling on world leaders to make concrete commitments to tackle the climate emergency at COP26 next month. Alongside their calls, each brewery has brewed a new beer creating a limited-edition collection of 26 beers that use surplus bread that would otherwise have gone to waste.

Toast Ale, who coordinated the series, has supplied pre-prepared surplus crumb and shared expertise with the fellow breweries – including Guinness and Adnams – to enable the creation of their new beers.

FoodIngredientsFirst speaks with Louisa Ziane, COO of Toast Ale, who says the brewing industry, alongside all sectors, has a responsibility to consider the climate crisis and act. 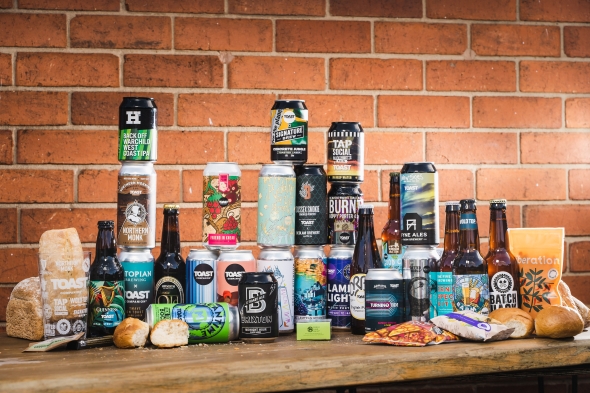 Toast Ale has brewed two new beers for the Companion Series.Laying down the gauntlet
The coalition has sent an open letter which highlights reducing food waste as a critical measure in reducing GHG emissions and deforestation. Alongside the open letter, each participating brewery has brewed a new beer for the Companion Series, a collection of beers that use surplus bread that would otherwise have gone to waste.

This week, Innova Market Insights revealed its Top Ten Trends for 2022, citing “Shared Planet” as its number one theme.

As planetary concerns outstrip personal health when it comes to consumers’ food priorities, brands are moving on from simply proclaiming their credentials to meeting a clear, agreed and understandable measurement of their environmental and social impact.

Meanwhile, the market researcher also highlighted “Upcycling Redefined” as a Top Trend for the coming year, which links to themes around waste and ingredients.

Toast has brewed two new beers for the Companion Series. Its “For the Planet” Juicy IPA is brewed with surplus fresh bread, organic malt, and British oats and wheat. It also collaborates with Race to Zero, Business Declares and Zero Hour (the campaign for the Climate and Ecological Emergency Bill).

Meanwhile, the “For People” Coffee Porter is brewed in collaboration with Cafédirect, using surplus bread and Brazilian coffee beans.

Collaborate efforts
Toast Ale has been brewing with bread since it was founded in 2015. It has supplied pre-prepared surplus crumbs and shared expertise with fellow breweries to support the circular economy at this critical time.

“Climate change is already affecting people around the world,” urges Ziane. “But by acting now, we can reduce risks, be better prepared and respond more effectively. There is still time to protect our planet, where people and nature can thrive.”

“We hope that those responsible for making policy decisions and setting international targets at COP will ‘use their loaves’ and work together to take meaningful action for the sake of our collective future.”

Toast Ale is partnering with Rainforest Trust UK to protect 3.25 million trees in threatened tropical rainforests. At the same time, a collaboration with Soil Heroes will support UK farmers to replenish the health of soils, sequestering 360 metric tons of CO2 and holding more water and improving biodiversity. The Companion Series is expected to raise over £65,000 (US$89,000) for these projects.

The latest IPCC report reminds industry that we have a narrow window to reduce further warming of the planet, and it’s closing rapidly, outlines Tristram Stuart, co-founder of Toast Ale.

“Food systems are responsible for one-third of GHG emissions and 80% of deforestation. However, one-third of the world’s food is never eaten, an unnecessary use of the land and resources, and emissions of greenhouse gases, to produce it,” he says.

Outside of the brewing space, Mars recently revealed it is ramping up its efforts to achieve net-zero GHG emissions across its entire value chain by 2050, aligning with the most ambitious aim of the Paris Agreement to limit global temperature rises to 1.5 °C.

Heineken has entered into an implementation agreement to acquire Distell and Namibia Breweries (NBL) in a move to create a majority-owned business with a valuation of... Read More

A time-series study looking at Brazil’s shift to higher levels of ultra-processed foods in the last 30 years shows these foods significantly contribute to... Read More

FoodDrinkEurope goes carbon neutral, continuing its path to net-zero by 2050