You are in : All News > “Breakthrough solution” for plant-based foods: Parabel plans commercial production of water lentil hydrolysate 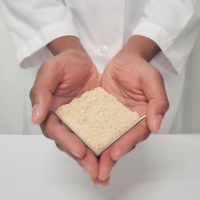 13 Aug 2019 --- Parabel USA, a producer of plant protein ingredients from water lentils, is preparing for the commercial production of its colorless water lentil hydrolysate ingredient, scheduled for the end of this year. This product is designed to be an allergen-free substitute for any plant protein used today, such as soy or pea. The functional ingredient contains 65-70 percent hydrolyzed protein for use in meat analogs, in addition to offering a complete amino acid profile. The ingredient is also marketed as an ideal solution in the sports protein market.

“In conjunction with its complete amino acid profile and high digestibility the water lentil hydrolysate will be an easy drop-in solution to everything plant- based – from burgers and sausages to sports nutrition and beverages,” says Anthony Tiarks, CEO of Parabel.

Click to EnlargeParabel’s Lentein products are Non-GMO Project Verified and are certified Kosher and Halal.Water lentils (Lemnoideae) are pegged by the company  as a sustainable choice for plant-based manufacturers concerned about the food system’s impact on climate change, particularly meat production industries such as the livestock sector.

“Lemnaceae is the smallest flowering plant that flowers, fruits and seeds,” Cecilia Wittbjer, VP of Marketing tells FoodIngredientsFirst. “Being a nutritional powerhouse, it had to adapt itself to cloning as a favored way of reproducing because so many animals were grazing on it. The result is that it grew faster than any other land-based crop. Coupled with the fact that we can nutrify the water to maximize nutrition it means that the water and carbon use per kg of protein is low.”

The water lentil hydrolysate is Parabel’s newest addition to its Lentein protein line, which now includes a plant milk, superfood supplement and flour. Parabel is currently finalizing its second water lentil farm, bringing the capacity for Lentein plant protein to 3,500 Metric Tons (MT) per year. The location of the two farms and the pilot plant are in an “Opportunity Zone” – a designation created by the US Tax Cuts and Jobs Act of 2017 that allows for certain investments in lower income areas to have tax advantages – and situated close to the company’s headquarters in Vero Beach, Florida.

“According to the World Health Organization (WHO), a complete protein is one with an Amino Acid Score over 1.0 and Lentein has 1.02. This is similar to whey protein at 1.05,” says Wittbjer. “The protein quality standard also has to do with the digestibility – and Lentein’s digestibility is 91 percent – which, together with the amino acid score of 1.02, gives a Protein digestibility-corrected amino acid score (PDCAAS) of 0.93. Of course, Lentein contains other valuable macro and micronutrients such as omega 3 ALA, lutein, vitamins and minerals.”

High-yielding and sustainable
Parabel highlights that its rapidly growing aquatic plant thrives in open water and produces a significantly high yield due to frequent harvests. In addition, the company notes that water lentils’ hydroponic infrastructure is highly scalable. Parabel grows the water lentils in hydroponic ponds in Florida where the water gets recycled to 98 percent. Because this crop doubles itself in 24 to 36 hours, the company harvests every day, meaning that the plant’s yield of food per acre is higher than any other land-based crops. Click to EnlargeProtein-rich water lentils are grown in hydroponic ponds, where they double in yield within 24 to 36 hours.

Parabel’s production process takes 30 minutes, from “farm to table,” without the use of chemicals in processing. To date, Parabel has 96 patents for its technology in growing and processing water lentils.

In August 2018, the product line earned the GRAS No Objection Letter from the US Food and Drug Administration (FDA). The FDA progress means a lot for the more conventional food Wittbjer told FoodIngredientsFirst at the time. “The supplement industry has its own standards and most have been happy with just the GRAS confirmation,” she explains. “It also means that we will be able to fast-track regulatory in areas of the world where they take the FDA regulation as their standard.”

In May, Parabel announced successful results for its new plant-based milk made from water lentils, adding to its rapidly growing portfolio of patents worldwide. Parabel’s lentil milk is similar in color to regular milk and captures the extraordinary, high-quality protein and mineral benefits of water lentils while containing no allergens.

Flavors house Givaudan pegged lentils as one among the top six “most promising new plant-based proteins” this year. According to the company’s data, 57 percent of global consumers are actively seeking protein sources, spurring a 92 percent growth in sales of plant protein products recorded over the previous year.