You are in : All News > Blockchain coffee: Token builds a “community-owned” coffee brand 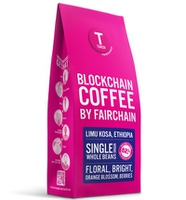 26 Jun 2018 --- New coffee brand Token is using blockchain technology to directly link Western coffee drinkers with the communities that grow and roast their beans in a potentially disruptive move for the global coffee industry. An initiative by FairChain Foundation, and supported by FairChain roaster Moyee Coffee, Token is the first fully end-to-end-blockchain powered coffee brand.

It offers an alternative model to the so-called dominating “Big Coffee” companies that invest billions in branding but little to nothing in the farmers who produce the beans.

Each bag of Token coffee comes with a token worth €0.50 cents. The company says this is the amount Token is willing to spend on marketing, a fraction of what a typical brand spends, and these euros are spent on the crowd.

Consumers can take that money to KrypC Technologies, a blockchain-based platform created for Token, and decide how to invest the money – in themselves through discounted coffee, in the brand Token or in the farmers and families that produce their coffee.

According to Token, the majority of the world’s 25 million smallholder farmers struggle to cover the cost of production, let alone account for social and environmental costs.

“Blockchain technology makes the enormous inequality in the coffee chain transparent to consumers. Token embraces this transparency to offer a solution,” says FairChain founder Guido van Staveren. “By inviting consumers to be part of our business model, Token is a giant leap towards securing living incomes for smallholders. At no extra cost to consumers. It’s about distributing the value equally to all.”

Token was born out of a collaboration between Bext360, Moyee Coffee and FairChain Foundation; three purpose-driven organizations focused on disrupting the global coffee industry.

By combining blockchain technology and on-the-ground know-how, they are introducing radical transparency in a sector notoriously lacking it. Their blockchain system shows who earns what along each step of the global coffee chain. This allows both consumers and brands to identify inefficiencies and eliminate unnecessary mediators.

It also sets the stage for redistributing the value more equitably across the entire chain.

“Blockchain isn’t just about traceability and transparency. It’s also about ownership. Who owns the coffee? Who deserves the biggest share of the wealth?” says Van Staveren.

“Token empowers our community to answer these questions and choose for themselves.”

Brands are tapping into blockchain technology as they believe that it offers much higher levels of transparency and efficiency and is needed to change this system.

“Token is going all-in. With our first run of 60,000 kilograms of smallholder-produced and blockchain-traceable coffee, we want to offer serious proof of concept that a shared value chain is possible,” adds Van Staveren.

“We’ve been talking long enough about living incomes for farmers. With blockchain, we now have the tool! Why wait?”

Community-owned coffee
“Blockchain is an incredible technology, but despite it being a big buzzword few people know what it actually means,” says Mark Kauw of FairChain Foundation. “Token gives people the opportunity to experience blockchain, not just talk about it.”

“Blockchain creates new economic opportunities. Instead of sticking the savings in our pockets, as most brands would, we’re giving it to the people that matter most: the farmers and the coffee drinkers. Token empowers people to invest the money blockchain saves them. We have no influence as a brand. We’re just a facilitator. How they invest is entirely up to them.”

The first batches of Token will premiere this summer at the European Coffee Federation, the European B-Corp Summit, World of Coffee and De Parade (all locations).

The food industry is in the early stages of harnessing the power of blockchain technology as we learn more about cryptocurrency concepts and how blockchain applications can be beneficial for companies and consumers. Hyped as a potentially game-changing pioneering innovation, blockchain technology is inspiring change and innovation in the global food and beverage industry and offers the promise of disruption on a considerable scale across multiple sectors including agri-food, retail and the ingredients business at large.

Cutting-edge companies looking to get ahead of the curve are forming partnerships in this burgeoning technology invented a decade ago by Satoshi Nakamoto – the name used by the unknown person or people who designed bitcoin and created its original reference implementation – for use in the cryptocurrency bitcoin.

A blockchain, or distributed ledger, is a continuously growing list (digital file) of encrypted transactions called “blocks” that are allocated to a peer-to-peer (P2P) network of computers. Blockchain is a digital ledger in which purchases made in bitcoin or another cryptocurrency are recorded chronologically and publicly.

FoodIngredientsFirst has written extensively on the potential for blockchain in the food & beverage industry in recent months, including the following report.

Ocean Spray Cranberries will leverage Brightseed’s artificial intelligence (AI) Forager technology to profile the compounds in cranberries and their impact on... Read More

Nearly 75% of small cocoa farmers in Ghana and the Ivory Coast currently earn too little to lead a decent life. Shining a light on this, Dutch institution Wageningen... Read More

Imagindairy, a food tech company creating plant-based milk proteins identical to cows, has completed a US$13 million round of funding to advance their technology and... Read More