You are in : All News > Barentz expands its foothold in Latin America with new Brazilian partnership 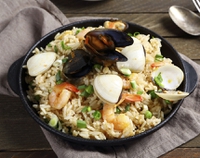 “This is our first real entrance into Brazil, a step which fits in perfectly with our global strategy, where Latin America is an important new market,” says Hide van der Wal, CEO of Barentz International, headquartered in the Netherlands.

“Brazil has recovered after some years of recession and we now see great opportunities here, both to develop the country and to grow as a company,” he adds.

Tovani Benzaquen Ingredients is headquartered in Sao Paulo and has been a significant food ingredient distributor in South America since 1992.

“After 25 successful years on the Brazilian market, where our company has grown steadily year by year, the time has come to take a big leap forward together with Barentz,” says Moses Benzaquen, CEO of Tovani Benzaquen Ingredients.

“Barentz, strong in both food and pharma, is the perfect partner for us, to wide and optimize our product portfolio, so that we can continue to serve our customers with an even wider range of high standard ingredients.”

FoodIngredientsFirst spoke to Frank Smit, Regional Direction LatAm & Caribbean, who touched upon which product lines may enjoy the most popularity in the region: "We have seen interest in several of our innovative food ingredients like Lenetein proteins from Parabel and powdered natural ingredient from AmTech. But also our own line of blended natural and synthetic antioxidants from Vitablend and their vitamin and mineral premixes, are very much in demand. Last-but-not-least: we also expect to grow with Tovani Benzaquen in the Personal Care segment."

Barentz International featured in the news last week, regarding their expansion into Latin America. They announced the establishment of a joint venture with Deltagen Group, a specialized food ingredients distributor headquartered in Curaçao, with local presence in Venezuela, Colombia, Ecuador, Chile, and Peru.

In November last year, the two companies announced this strategic cooperation. With the established Joint Venture, an even stronger commercial bond was solidified.

“We had been looking for a qualified partner to expand our business into Latin America for some years,” says van der Wal.

Speaking to FoodIngredientsFirst last week, Frank Smit, spoke of how Latin America is becoming a key market to focus on, paving the way for their announcement of the expansion in Brazil:

“Over the past five to ten years, Latin America has seen a democratization of products that were previously considered ‘premium,’ that are now becoming products of mass consumption. At the same time, there is a growing segmentation on the food and beverage market, and a lot of different products are becoming available in each food category. Another change is that the consumers in Latin America are getting more educated and more aware of the ingredients in food.”

“We do expect to see further growths in Latin America, most of the economies are growing, which means a higher GDP and purchasing power for the consumer. Simultaneously the population is growing so there are more mouths to feed, so to speak.”

In general, most multinationals have a significant presence in mature markets like Europe and North America. In these markets, it is difficult to show one digit growth, according to Smit. “On the contrary, LATAM is still very focused on basic, agricultural products and offers more opportunities for high-value products and high growth possibilities for the food companies entering this market,” he adds.

On a concluding note, Smit adds that while the current partnerships that have been announced publicly mean that Barentz's coverage of the Latin American region is "well on its way," there will be more announcements to come.