You are in : All News > Back to bases: Oat and spelt pegged for vegan ice cream growth in Europe

Back to bases: Oat and spelt pegged for vegan ice cream growth in Europe

16 Dec 2021 --- As consumers in Europe seek F&B from local and sustainable sources, plant bases beyond the highly popular coconut are being tapped for vegan ice cream.

FoodIngredientsFirst speaks with Agrana, Edlong, Emsland and Meurens Natural about their latest moves to improve the taste, sustainability and nutritional value of plant-based frozen treats.

“Coconut at the moment is the most trendy flavor,” says Michael Wieland, R&D manager at Agrana.”

“Many consumers who try new plant-based products begin with coconut because of its natural fat content. The impression in your mouth is more or less like milk.”

Mervyn de Souza, chief innovation officer at Edlong, echoes this sentiment, explaining that the lipids in coconut give a creamy mouthfeel, making it popular not only in ice cream, but in yogurts as well.

At FiE 2021, Agrana showcased a coconut-based sorbet, crafted with 100% vegan chocolate caramel swirls. The concept is one in a range of more plant bases, including oat and spelt, as Agrana anticipates the demand for locally sourced ingredients will increase.

Winds of change
Consumers are already looking for new things, explains Wieland. While coconut was “the starting point” for vegan ice cream, “it can’t be local.”

Agrana created a 100% vegan sorbet with caramel chocolate swirls from a coconut base (right).This fact of the matter could be a deal-breaker for consumers seeking sustainable products.

“With COVID-19, the idea of local ingredients is more and more important. People are looking at where their food comes from.”

Wieland posits that spelt is bound to be the next most important plant base in European vegan ice cream.

“Spelt is very popular – at least in Germany and in Austria – and it could be locally sourced like oat. However, there are already a lot of oat products in the market, so spelt represents a new opportunity that brands are looking for.”

He adds that the company has received “a lot of requests for spelt as a plant base,” not just in yogurts, but in ice creams and drinks.

A plant for each geography
Edlong, a specialist in dairy flavors, has also picked up on the locally sourced trend. De Souza notes that certain plant bases fair better in regions where the crop is more available.

In Latin America, for example, quinoa and amaranth tend to be more prominent in vegan products. Whereas in the US, he has observed more yellow pea, oat and soy bases.

“What’s going to make or break the bank is vertical integration,” says de Souza. “There’s so much in a crowded space that vegan products have to be sustainably economically viable.”

“At the end of the day, consumers are looking for affordable nutrition that tastes good. There is room for many players in the market, but not everyone.” 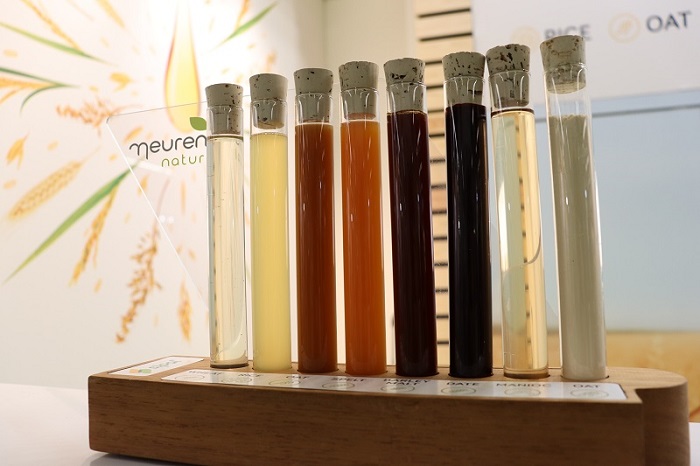 The company collaborated with Symrise to flavor the product, using a masking flavor along with a bourbon vanilla flavor.

“The end result is a natural taste with no pea flavor,” says Patrick Geers, marketing associate for Emsland.

The vegan ice cream also contains “more or less” the same amount of protein as dairy, he adds.

Pumping up protein with oat
Matching the nutrition in dairy alternatives has come increasingly into focus.

In a recent launch, Meurens Natural revealed an oat protein validated from the insoluble components of its syrup processing sidestream. It also claims to have launched the first organic-grade oat protein in the world.

The ingredient is comparable with most plant-based proteins on the market with regards to protein content, according to Tim Van de gehuchte, sales and marketing manager, Meurens Natural.

The ingredient contains a minimum of 55% protein, it is high in the amino acid lysine, and it has a neutral taste – giving it advantage in the dairy alternative market, he notes.

“When you’re talking about pea protein, chickpea or fava bean – these proteins can have a very intense taste. You need to do a lot of masking and add flavors to make it acceptable.”

Due to oat protein’s neutral and bland taste, flavors can be added directly, he says. The ingredient also has applications in such as cereal bars, cookies and vegan protein-enriched pasta.

AGRANA is an internationally-oriented company headquartered in Austria which adds value to agricultural raw materials to produce a wide range of industrial products for the processing sector. Our product portfolio ranges from tailor-made fruit preparations and fruit juice concentrates to customized starch products, sweeteners and sugar.

AGRANA offers an extensive portfolio of natural products, superior service as well as innovative ideas and expertise for customers worldwide. With our worldwide network of R&D and sourcing specialists, we transform consumer trends into joyful and natural solutions that meet the needs of a dynamic market.

We guarantee our customers both the traceability of sourced materials back to their origins as well as their availability and quality, e.g. GMO-free or organic. We rely on low-emission technology and make use of nearly 100% of the agricultural raw materials processed.

As we hit just over the halfway mark on Veganuary, consumers in record numbers commit to ditching meat and dairy for January, while The Vegan Society kicks off a novel... Read More