You are in : All News > An inconvenient truth? Organic food’s impact on climate change in the spotlight following critical report 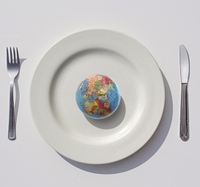 17 Dec 2018 --- Organically farmed food has a bigger climate impact than conventionally farmed food due to the greater areas of land required, according to a new study. Researchers have developed a new method for assessing the climate impact from land-use, and used this, along with other methods, to compare organic and conventional food production. The results show that organic food can result in much greater emissions. But some points of the study are being challenged by advocates in the organic farming sector.

The researchers – involving the Chalmers University of Technology, Sweden – created the novel metric for calculating the carbon footprint of specific land use.

“Our study shows that organic peas, farmed in Sweden, have around a 50 percent bigger climate impact than conventionally farmed peas. For some foodstuffs, there is an even bigger difference. For example, with organic Swedish winter wheat the difference is closer to 70 percent,” says Stefan Wirsenius, an associate professor from Chalmers, and one of those responsible for the study.

The reason why “organic food is so much worse for the climate” is that the yields per hectare are much lower, primarily because fertilizers are not used, notes the research.

To produce the same amount of organic food, you, therefore, need a much bigger area of land, researchers note. Described as a “ground-breaking aspect of the new study” is the conclusion that this difference in land usage results in organic food causing a much larger climate impact.

“The greater land-use in organic farming leads indirectly to higher carbon dioxide emissions, thanks to deforestation,” explains Wirsenius. “The world’s food production is governed by international trade, so how we farm in Sweden influences deforestation in the tropics. If we use more land for the same amount of food, we contribute indirectly to bigger deforestation elsewhere in the world,” he adds.

The organic sector response
The organic industry has responded critically to the results of the study, as energy use in terms of food production has not been taken into account. “To look at agricultural systems and their impact on climate change and not to address energy use would be irresponsible,” Steven Jacobs, Business Development Manager at UK organic certification control body, Organic Farmers & Growers (OF&G), tells FoodIngredientsFirst, who did appraise the “honest appraisal of biofuels in the study.

“Today's major investments in biofuels are also harmful to the climate because they require large areas of land suitable for crop cultivation, and thus – according to the same logic – increase deforestation globally, the researchers in the same study argue. However, any research worth its salt would surely need to also adequately address energy in terms of food production,” he adds.

One of the areas where a high-yield non-organic system will be open to serious question is over the amount of energy expended and the effects on the environment as a result of that system of food production, he notes. “Artificial nitrogen as used within the vast majority of non-organic food systems has massive impacts on global greenhouse gas emissions. And not only on a field-by-field basis,” says Jacobs.

Jacobs explains how that in many cases only 15 percent of this artificial fertilizer is taken up by food crops which means the rest will find its way into the atmosphere and into watercourses.

“Compounds such as nitrous oxide are potent greenhouse gases that also pollute drinking water. In addition, they contribute to acid rain, which leads to acidification of soils damaging ecosystems and eroding biological diversity,” he adds.

Jacobs cites research by the academic institution, Research Institute of Organic Agriculture (FiBL) which says that organically grown crops require 30-50 percent less energy per unit area (including energy for the production of fertilizers and pesticides). Even though yields in the conventional system are higher per unit area, energy usage per unit of yield is lower by 19 percent in the organic systems.

“Therefore, to ask how food systems impact on our climate it is vitally important to take a great many of the factors involved in food production and system approaches into account,” Jacobs explains.

The economic and political argument
Speaking with FoodIngredientsFirst, Emma Hockridge, Head of Policy at the Soil Association, says: “Contrary to the claims of this research, scientists have shown that we already produce enough food and that economic and political, not agricultural, problems need solving if we are to feed the world.”

“The biggest challenges now facing farming are to produce healthier diets to cut worldwide obesity, reduce food waste globally and to produce food while cutting farming’s greenhouse gas emissions to net zero over the next few decades,” she notes.

“When the environmental and other damage caused by high energy and chemical inputs in non-organic are factored in – some of which the report’s authors did not take into account – the research we’ve seen to date shows organic farming is more beneficial to society,” says Hockridge.

“Organic methods show that it is possible to have long-term sustainable food production and environmental conservation; supporting 50 percent higher abundance of wildlife than non-organic and higher standards of animal welfare, while improving soil health and supporting soils to capture up to 450kg more carbon per hectare,” she notes.

Questioning organic benefits
The researchers do recognize that organic farming does not use fertilizers and the goal is to use resources like energy, land and water in a long-term, sustainable way. Crops are primarily nurtured through nutrients present in the soil and the main aims are greater biological diversity and a balance between animal and plant sustainability. Only naturally derived pesticides are used.

“The variation between farms is big, with the interpretation differing depending on what environmental goals one prioritizes. At the same time, current analysis methods are unable to fully capture all aspects,” it says.

“The reason why we did this study is essentially the need to factor in, in a systematic way, the climate cost of using more land for agricultural purposes, such as food and biofuels. Using more land for food and biofuels diminishes the potential for sequestering CO2 by growing forest vegetation on land spared form agriculture. The latter is a type of “negative” CO2 emission, and negative emissions are considered by many analysts to be essential for meeting the 1.5 or 2-degree climate targets,” Wirsenius tells FoodIngredientsFirst.

“Organic farming causes fewer GHG emissions because it uses less, or no, inputs such as fertilizer. We did factor in this into our calculations.

Even organic meat and dairy products are – from a climate point of view – worse than their conventionally produced equivalents, claims Wirsenius.

“Because organic meat and milk production uses organic feeds, it also requires more land than conventional production. This means that the findings on organic wheat and peas in principle also apply to meat and milk products. We have not done any specific calculations on meat and milk, however and have no concrete examples of this in the article,” he explains.

A new metric: Carbon Opportunity Cost
The researchers used a new metric, which they call “Carbon Opportunity Cost,” to evaluate the effect of greater land-use contributing to higher carbon dioxide emissions from deforestation. This takes the amount of carbon that is stored in forests and thus released as carbon dioxide as an effect of deforestation into account. The study is among the first in the world to make use of it.

“The fact that more land use leads to greater climate impact has not often been taken into account in earlier comparisons between organic and conventional food,” adds Wirsenius. “This is a big oversight, because, as our study shows, this effect can be many times bigger than the greenhouse gas effects, which are normally included. It is also serious because today in Sweden, we have political goals to increase production of organic food. If those goals are implemented, the climate influence from Swedish food production will probably increase a lot,” says Wirsenius.

“Our new method of measurement allows us to make broad environmental comparisons, with relative ease,” he explains.

The results of the study are published in the article “Assessing the efficiency of changes in land use for mitigating climate change” in the journal Nature. The article is written by Timothy Searchinger, Princeton University, Stefan Wirsenius, Chalmers University of Technology, Tim Beringer, Humboldt Universität zu Berlin, and Patrice Dumas, Cired.

Climate change and the food industry
Climate change is a hot topic for the food industry with many key players setting ambitious goals to reduce greenhouse gas emissions, cut down on waste, use energy efficiently and streamline strategies to tackle what is a profound challenge with direct implications on food safety, supply chains and raw materials.

The notion of how big business will contribute to the fight against climate change is one of the key issues being debated after a leading body of experts, the Intergovernmental Panel on Climate Change (IPCC), issued stark warnings in October. The study says that a rise of more than 1.5°C is risking the plant’s livability and this could be exceeded by 2030 unless drastic steps are taken now. With clear benefits to people and natural ecosystems, limiting global warming to 1.5°C compared to 2°C could go hand in hand with ensuring a more sustainable and equitable society but this would require rapid, far-reaching and unprecedented changes in all aspects of society, according to the report.

In November, some of the world’s leading science academies said that global food systems are failing and urgently need to be turned around to avoid catastrophic climate change. An in-depth report from the InterAcademy Partnership (IAP) calls for a total transformation of how systems operate as agriculture and consumer choices are major factors driving “disastrous climate change.” Key themes include the type of food produced and how to mitigate impacts through “climate-smart” food systems as well as dietary changes such as cutting down on meat.

International climate change negotiators announced late Saturday (December 15) that they had reached an agreement at the 24th Conference of Parties (COP24) in Poland. The text charts a path forward for countries to set tougher targets for cutting greenhouse gases under the Paris climate agreement, as well as stronger transparency rules for countries in disclosing their emissions.

The goal of the COP24 to the United Nations Framework Convention on Climate Change is to hammer out critical the details of the Paris climate agreement. Under the 2015 accord, countries set out to limit global warming to 2 degrees Celsius above pre-industrial levels by 2100 at most, with a preferred target of 1.5 degrees Celsius.