You are in : All News > Alternative proteins, bold flavors and Ethiopian options to trend in 2019, finds US restaurant survey

19 Dec 2018 --- Alternative sources of protein, locally sourced meats and seafood, more veggie-carb substitutes and globally inspired breakfast options are a small sampling of the smorgasbord of food trends that the US restaurant industry will be serving in 2019. Expect to see more plant-based sausages and burgers, new cuts of meat, including oyster steak, Merlot cut and Vegas Strip Steak, plus ethnic-flavored breakfast items, like shakshuka, an egg-and-tomato-sauce dish, in 2019, finds new research from the National Restaurant Association.

“The growing trend of plant-based, alternative proteins is not necessarily surprising, but it is interesting,” Hudson Riehle, Senior Vice President of Research for the association, tells FoodIngredientsFirst in light of the results.

“Consumers, especially Millennials and Gen Zs, are much more knowledgeable about food and want to eat as healthfully as they can. Many have adopted vegetarian and vegan diets and this trend fits right in with those eating patterns. It gives them the opportunity to indulge and experience flavors and textures similar to those they might experience with, say, a beef burger, but without straying from their intended dietary habits,” he notes.

The findings are a part of the association’s annual What’s Hot survey, a barometer of food and beverage trends at restaurants around the country. The results forecast food, beverage and culinary concept trends for the year ahead. The annual survey looked at the responses of approximately 650 professional chefs – all members of the American Culinary Federation.

In terms of flavor tips for 2019, Riehle notes that big, bold flavors that are ethnic or globally inspired are more popular now than ever before.

“We’re seeing a lot of interest in North and West African cuisine as well as Israeli and Thai foods and beverages. Perhaps it’s because so many Americans have come here from different parts of the globe and have brought those flavors here to meld and mix with the newer tastes we’ve adopted here. This trend seems to illustrate the idea of America as a culinary melting pot,” he notes.

Within the beverage space, Riehle notes several platforms being addressed. “In terms of beverages, again, we’re seeing an infusion of globally inspired flavors. On the non-alcoholic side, Gazoz, a carbonated, fruity type of soda from Israel, looks like it’s growing in popularity with consumers. It’s made with seasonal fresh fruits, herbs and sparkling water,” he adds.

“As far as alcoholic beverages are concerned, culinary cocktails, featuring savory, fresh ingredients and herbs, are trending as are Asian liquors, such as baijiu, shochu and soju. In terms of snacks or desserts, Thai-rolled ice cream appears to be very popular with diners,” he further notes.

Innova Market Insights recently listed “Discovery: The Adventurous Consumer” as its number 1 trend for 2019. The market researcher maintains that an adventurous consumer is coming to the fore and demanding new flavorful experiences with a true story behind them. Globalization is sparking the consumer’s curiosity to discover new food and drinks. This is resulting in brands bringing more variety to the market. The connected world has led consumers of all ages to become more knowledgeable of other cultures. Heightened sensory delivery, storytelling and novelty are providing ways for brands to engage with more adventurous, enjoyment-seeking consumers.

The rise of an “adventurous” consumer is backed up by new consumer data. Innova Market Insights consumer research (2018) indicates that 7 in 10 US consumers “love to discover new flavors,” with similar numbers of respondents reported in China and the UK.

The market researcher also finds that 28 percent of US, UK and Chinese consumers have experienced a shift in their tastes towards more exotic or adventurous flavors in snacks. This market dynamic has contributed to a 35 percent growth in the use of a “discovery” claim in 2017 from 2016. These types of products feature claims that include the use of words such as “discover,” “explore,” “uncover,” “unveil” and “unravel.” At the same time, rising consumer interest in other cultures has resulted in a 17 percent average annual growth in global food & beverage launches with ethnic flavors over the 2013-2017 period (Ethnic flavors = Flavors with name of country/region of origin in brand/product name). 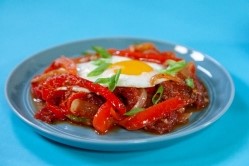 Shakshouka is a Tunisian/Israeli dish of eggs poached in a sauce of tomatoes, chili peppers, and onions, commonly spiced with cumin, paprika, cayenne pepper and nutmeg. It is expected to be among 2019's food trends.Riehle concurs that this notion of discovery is a major trend within the US restaurant scene, tipping Ethiopian cuisine as a key theme to watch out for.

“Certainly, it seems as though Americans are much more willing these days to explore new foods, cultures and cuisines. Ethiopian food is making huge inroads in popularity here,” he says. “Perhaps it is the blend of spices, along with the idea that it may be a kind of comfort food. It’s hearty and flavorful and casual – all at the same time. Also, much of it is eaten with your hands, scooped up with sponge like teff [bread], that often is gluten free, so that appeals to a whole other subset of diners – those who suffer from allergies,” he adds.

Riehle notes several other ingredients to watch out for moving forward. “Mostly, consumers are going to look for more locally sourced meats and seafood, protein-rich grains, such as hemp, chia, quinoa and flax, and more natural, clean foods,” he concludes. With food product developers often picking up on restaurant trends, it will be interesting to see whether the association’s predictions are taken up in new food & beverage industry product development too.

A US appeal court has upheld a ruling that says chain restaurants in New York City must flag up menu items with high sodium content by showing a salt-shaker icon to... Read More