You are in : All News > Afghanistan’s economic and food crisis takes heavy toll on female population, reveals CARE report

16 Aug 2022 --- The preliminary findings of a new CARE report have confirmed the harsh toll the food and economic crisis in Afghanistan is having on its female population. This comes on the one-year anniversary of Taliban rule in the country.

The country has descended deeper into an already alarming hunger crisis, exacerbated by the economic and liquidity crisis, drought, and rising food prices, with nearly 20 million people facing acute food insecurity as of May 2022.

“Our research confirms some very concerning ways women are impacted by Afghanistan’s food and economic crisis. Of the women surveyed, a staggering 87% report a considerable decrease in their household income since August 2021,” says Mélissa Cornet, CARE Afghanistan’s Humanitarian Advocacy Advisor. 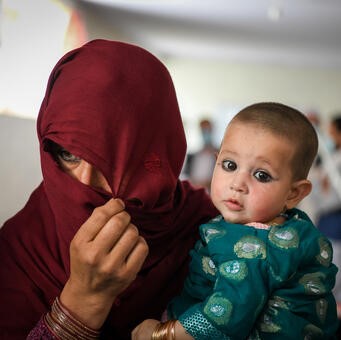 Women are heavily impacted by the food and economic crisis in Afghanistan. (Credit: UNICEF)“These reduced incomes impact every facet of a family’s life, including the ability to buy enough food, to buy nutritious food, to seek urgent medical attention, to have adequate shelter – the list goes on.”

For example, Afghanistan has seen a high spike in early, and forced child marriages, where cash-strapped families unable to feed all their children resort to selling children – and those children are usually girls.

“Of those surveyed, 12% of households indicated having to marry one of their daughters under 18 due to the food crisis. Imagine being so desperate for food that you marry off your young daughter just so that she and the rest of the family can eat. Devastating and heartbreaking for families and shattering for little girls whose lives will be forever changed,” Cornet explains.

Insufficient food
Meanwhile, women reported eating less food than other household members. Some 80% of women surveyed said they had to skip at least one meal in the two weeks before the research.

One common trend is that there was insufficient food in the household to accommodate the needs of everyone, and, as a result, women preferred feeding their children over themselves. The findings also show that men are adjusting their intake to ensure their wives can eat.

One of the women surveyed in Parwan province shared: “Before August 2021, we would cook three or four food items per meal (rice, chicken, meat etc.). Now we only cook one item. The food is just too expensive now. Some nights we would eat nothing and go to sleep hungry.”

Humanitarian aid
Another finding shows that women’s needs are not being considered when it comes to humanitarian assistance.

Less than 15% of women surveyed had been consulted by humanitarian actors on the type of assistance they needed before receiving it. Only 19% said the assistance had been adapted to their specific needs.

“Some aid is delivered in mosques, which are often not accessible to women, and some distribution points are too far away. Distance causes issues with transportation costs and requires women to travel outside of their community, possibly needing to be accompanied by a mahram (a male relative),” notes Cornet.

However, Cornet says the provision of humanitarian aid is insufficient unless paired with urgent action to address the economic drivers of the crisis. 18.9 million people in Afghanistan – nearly half the population – are facing acute food insecurity.

“The international community must act immediately to prevent a deterioration of the already dire humanitarian and food security situation.”

This gender alert draws on secondary data published in the past year and insights from UN Women visits across provinces in 2022; the analysis has found that the Taliban has not substantively changed its position on women’s rights.

Women are systematically excluded from public and political life and restricted in their access to education, humanitarian assistance, employment, justice and health services. In short, women’s and girls’ lives and prospects are confined to the home.

Food insecurity; a global issue
In June, UNICEF warned that an “explosion of deaths” is imminent in the Horn of Africa. Almost eight million children under the age of five are at risk of death from severe wasting in 15 countries, including Afghanistan.

Acute food insecurity is defined in this context as the condition in which a person’s inability to consume adequate food puts their lives or livelihoods in immediate danger.

Nearly two-thirds of those facing acute hunger are in just eight countries: Afghanistan, the Democratic Republic of the Congo, Ethiopia, Nigeria, South Sudan, Sudan, Syria and Yemen. In 17 countries, acute hunger either remained the same or increased.

Climate and natural disasters pushed another 29 million people into acute food insecurity in 2018.

With players in the food industry consistently carving out pathways for flavor and functional innovation, ingredient suppliers offer aid in the discoveries of new and... Read More