You are in : All News > Next-generation ice cream: PureCircle launches stevia treats

21 Aug 2019 --- Producer and innovator of stevia sweeteners PureCircle is launching an ice cream with no added sugar, set to debut at the end of the month in Chicago, US. The “gourmet” ice cream will initially be distributed around the city via PureCircle-branded ice cream trucks. The company also plans to provide the ice cream in other foodservice outlets, as well as to sell stevia-based ingredient blends to other ice cream producers. The frozen treats are sweetened with the company’s new generation of stevia, which it highlights as working well in dessert applications such as ice cream, as well as in a wide range of beverage and food products. This taps into the reduced-sugar trend, as well as allowing diabetics to enjoy sweets, with PureCircle partnering with JDRF, a Type 1 diabetes research organization.

“We have worked hard to develop and commercialize our next-generation stevia leaf sweeteners. To demonstrate our confidence in their great taste, we are putting our name on this delicious ice cream. We hope consumers – and our customers – will drop by PureCircle Ice Cream trucks to savor what our next-generation stevia can do in food and beverage products,” says Maga Malsagov, PureCircle CEO.

The ice cream will be available in vanilla, chocolate, coffee and salted caramel flavors to begin with, as well as offering a vegan fruit-flavored dessert. The products will be packaged in 5.3-oz mini-cups and pints at launch. The ice creams have a reduced calorie count, with the vanilla variety containing less than half the calories of one of the leading full-calorie branded vanilla ice creams.

Additionally, PureCircle is partnering with the Illinois chapter of JDRF, a charity that funds research, advocates for government action and provides support to fight Type 1 diabetes. JDRF will help educate its members about PureCircle’s ice cream. The company will also be the “official dessert sponsor” at JDRF’s One Dream Gala in Chicago at the end of the year and has pledged to help support JDRF’s work. 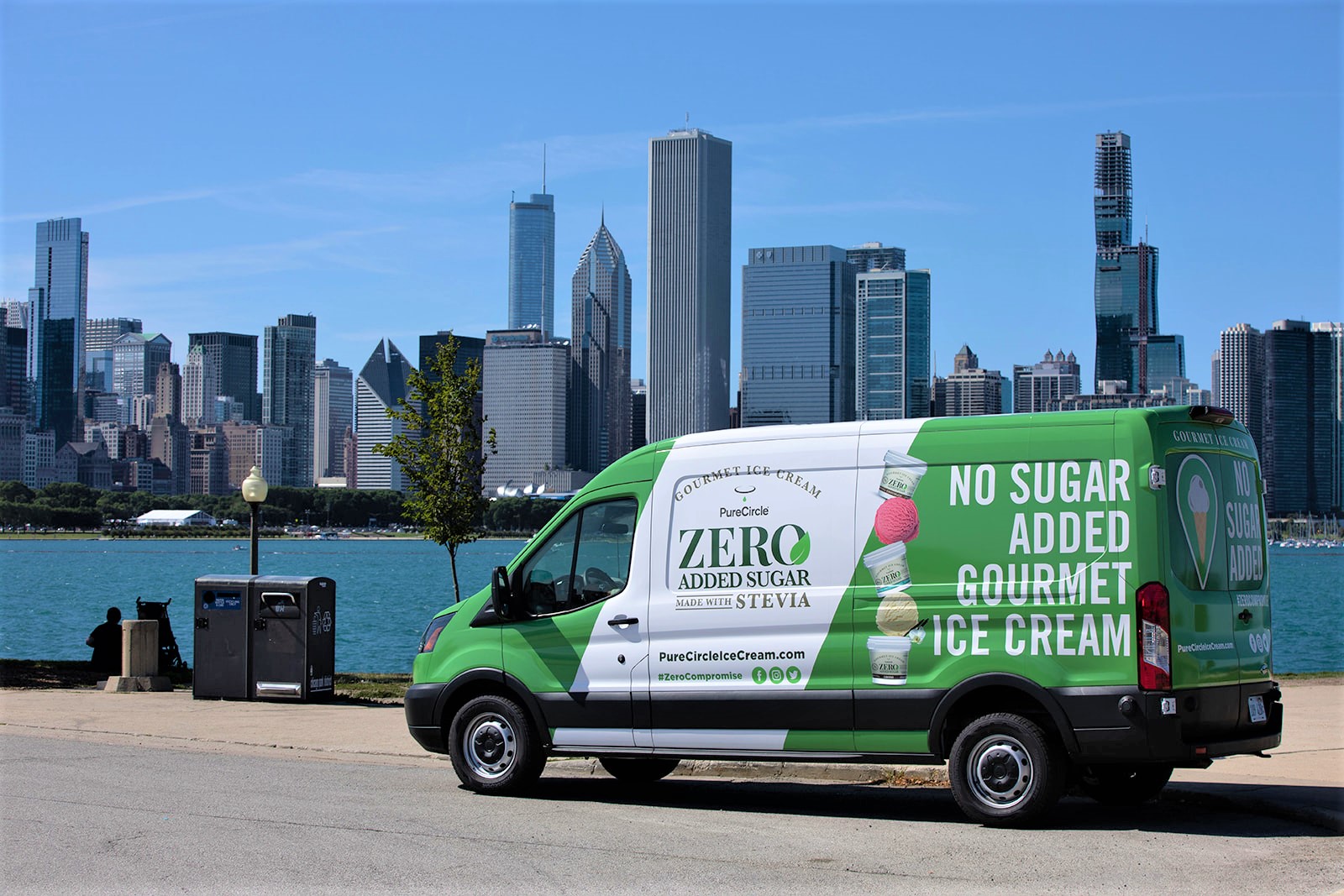 Click to EnlargeInitially, the ice cream will be available from trucks around Chicago.In response to the consumer search for reduced sugar offerings, as well as governmental clampdown on sugar, stevia is growing in use, with the number of European food and beverages tracked with stevia enjoying 11.4 percent CAGR from 2012-2016, according to Innova Market Insights. Additionally, one in three food and beverage launches tracked with stevia in the EU in 2017 featured a low-calorie claim. Sports nutrition and soft drinks are the top market categories featuring stevia as an ingredient, implying there is ample room for the ice cream niche to grow.

Sweetness without the sugar
The company touts the next-generation stevia sweeteners, which include Reb M, as important breakthroughs. The products have a clean, sugar-like taste, are calorie-free and are plant-based. This enables beverage and food companies to offer zero- and low-calorie products that use the sweeteners. Developing the products required overcoming challenges involving taste, supply and cost, with the company now able to increase its ability to supply the sweeteners in large and cost-effective quantities.

PureCircle was recently given approval for the expanded use and application of Reb M in Singapore. This will allow the company to participate in the 2022 mission to help eliminate 150 billion calories from the Singapore diet by replacing 10 percent per capita sugar consumption with stevia.

Sweeteners in general are becoming increasingly common as governments clamp down on dietary sugar levels. The US government’s dietary guidelines suggest “an eating pattern low in added sugar,” while the UK introduced a sugar tax on beverages. Meanwhile, consumers are also trying to cut down independently, with an Innova Consumer Lifestyle and Attitudes Survey (2018), finding that nearly seven out of ten consumers across the countries surveyed (US, UK, France, Germany, China and Brazil) have reduced their sugar intake.

This trend can be seen in the ice cream market specifically, with NPD offering “guilt-free” options that are variably low in sugar and fat, vegan or natural. One in ten dessert and ice cream launches features a reduced sugar claim, according to Innova Market Insights (Global, 2018). Additionally, “low-fat” and “no added sugar” were among the fastest-growing claims in H2 2018.

Kerry Group also noted the rise of lower-calorie and plant-based ice cream, noting that its Dairy EUM benefited from this, as well as the evolution towards premiumization. Meanwhile, Unilever reported that despite poor weather in the second quarter compared to the last two years, ice cream still managed to grow slightly over the half. Additionally, it saw good ice cream performance in Asia, with a boost from innovations such as Magnum White Chocolate and Cookies.

12 Dec 2019 --- Nestlé has reached agreement to sell its US ice cream business to Froneri, an ice cream-focused joint venture Nestlé created in 2016 with PAI... Read More

29 Nov 2019 --- As sugar becomes more central to the obesity debate and the target of taxes, its reduction is key for many consumers and a reformulation driver for manufacturers.... Read More

28 Nov 2019 --- Monk Fruit Corp., a business specializing in the supply of monk fruit with operations in China, US, Europe and New Zealand, is marketing its all natural sweetener... Read More