You are in : All News > Global Food Companies Come Together in the Fight to Halt Climate Change 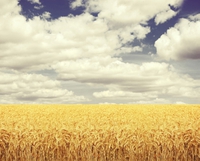 Coordinated by the nonprofit sustainability advocacy organization Ceres, the letter was spotlighted at a bipartisan, bicameral briefing on climate change in Washington, D.C. featuring a half-dozen food company executives. The briefing was sponsored by Senator Sheldon Whitehouse (D-RI) and Representative Chris Gibson (R-NY).

“Climate change is bad for farmers and agriculture. Drought, flooding, and hotter growing conditions threaten the world’s food supply and contribute to food insecurity,” states the letter, which appeared in both the Washington Post and Financial Times newspapers.  “As world leaders convene in Paris you will have an opportunity to take action on climate change that could significantly change our world for the better.”

“It’s extraordinary to see these iconic food companies, many of which are long-standing competitors, unite at this pivotal moment to urge our political leaders to act swiftly and decisively on global warming, which poses a direct threat to global food supplies,” said Mindy Lubber, President of Ceres.

CEO signatories pledged to boost their companies’ sustainability efforts, to advocate achievable, enforceable science-based carbon reduction targets, and to share their best practices to encourage other companies to join their effort.

Mars President & CEO Grant Reid said, “As a society we face immense challenges, including climate change, water scarcity and deforestation. We cannot stand back and simply accept these things as they are. We’re calling on the business community and global leaders to work together to set a new way forward. We can, and must, do more.”

“Climate change is a shared, global challenge that is best addressed at scale,” added Ken Powell, chairman and CEO of General Mills. “To reduce emission levels, we must work across our collective value chains with growers, suppliers, customers, peer companies, government leaders and industry partners. Together, we will identify new solutions and promote sustainable agriculture practices that drive emission reductions.”

Companies signing the letter are members of Ceres’ Business for Innovative Climate and Energy Policy (BICEP), an advocacy coalition of companies working with policymakers to pass meaningful energy and climate legislation. It is the first time these businesses have publicly united on the need for a strong global climate deal at the 21st Conference of Parties to the United Nations Framework Convention on Climate Change, also known as “COP21.”  Governments of more than 190 nations will meet in Paris this December at COP21 to discuss a possible new global agreement on climate change aimed at keeping global warming below the 2°C threshold.

The most recent reports by the Intergovernmental Panel on Climate Change (IPCC) show that climate change is already cutting into global food supplies and is contributing to price spikes and social unrest in various regions of the world. The rate of increase in crop yields is slowing, especially for wheat, which is sensitive to changes in heat. By 2030 negative impacts are expected across a wide spectrum of crops in both arid and non-arid regions. Changes in temperature and rainfall patterns could lead to food price rises of between 3% and 84% by 2050, according to the IPCC.

“The debate in Congress on climate change has been filled for too long with misinformation and partisan talking points,” said Sen. Whitehouse. “Today marks an important shift, as both Democrats and Republicans come together to listen to major food and beverage companies discuss how they are adapting to this global threat. I hope we will be able to build on today’s discussion and begin working toward bipartisan climate solutions in Congress.”

“Environmental stewardship through public-private cooperation is critical to the long term success of our nation as well as the stability and health of our global and regional environments,” said Congressman Chris Gibson (NY-19).  “It is a privilege to join with business leaders from across the country and globe in this discussion to explore ways forward on this issue.”

Many of the companies have set ambitious targets for reducing greenhouse gas emissions and driving sustainable sourcing in their supply chains. Mars, Unilever and Nestlé, for example, have each pledged to achieve 100 percent renewable energy across their operations, through RE100, a global initiative to engage, support and showcase influential companies committed to using 100 percent renewable power that now involves more than 30 companies globally.  Additionally:

“Kellogg Company understands that in order to meet the food needs of a growing world population, we must be proactive in addressing climate change,” said John Bryant, Chairman and CEO, Kellogg Company. “That starts with our farmers, extends through our entire supply chain, and includes collaborative efforts with our peers, such as this critical, joint call to action.”

“Global weather patterns affect crop yields, water availability and infrastructure integrity. These changes impact the business we do every day as well as the work of farmers, suppliers and distributors across our vast network of partners, said Paul Grimwood, Chairman and CEO, Nestlé USA. Nestlé intends to flourish for at least another 150 years, and we believe tackling climate change is key to a healthy planet and healthy people.”

“The cruel irony of climate change is that people in the developing world, many of whom grow the ingredients we use in our products, are the least able to adapt to climate change and will pay the steepest price for a problem they had no part in creating,” said Ben and Jerry’s CEO Jostein Solheim. “Today’s statement signals that our industry is committed to working towards solutions that deliver a stable climate and ensure the future success of our businesses and the communities around the world that supply them."

15 May 2020 --- This week in business news, Givaudan divested its processed and grated cheese business to St. Paul Group, a cheese specialist with premises in Belgium and the... Read More

04 May 2020 --- Kellogg has revealed that it is delaying its Incogmeato brand launch in light of the coronavirus outbreak. CEO Steven Cahillane flags that given the current... Read More

29 Apr 2020 --- Following a bid to sell its assets to Dairy Farmers of America (DFA) earlier this month, Dean Foods is now floating the idea of an alternative merger of its... Read More