You are in : SternMaid Expands Capacity to Keep up with Demand of Powder Mixtures

SternMaid Expands Capacity to Keep up with Demand of Powder Mixtures

20 Sep 2016 --- The contract manufacturer of foods and food supplements in powder form is greatly enlarging its capacity directly beside the existing production facility in Wittenburg and on 6 September SternMaid laid the foundation stone of a new production plant.

Over the past 18 years, SternMaid has already invested a total of 50 million EUR ($55.8 million) in the site. Till Backhaus, Mecklenburg-West Pomerania’s Minister of Agriculture, praised the entrepreneurial commitment of SternMaid at this location.

“SternMaid is a company that not only meets its current responsibilities but prepares for the future. That is every reason for us to say Thank You”. With these words, and with the convinced statement: “You are a great enterprise”, the Minister of Agriculture Dr. Till Backhaus underlined SternMaid’s importance for the region, an aspect he had already emphasized several times in his speech.

Torsten Wywiol, CEO and spokesman for the management, and plant manager Mark Riemer had invited over 300 employees 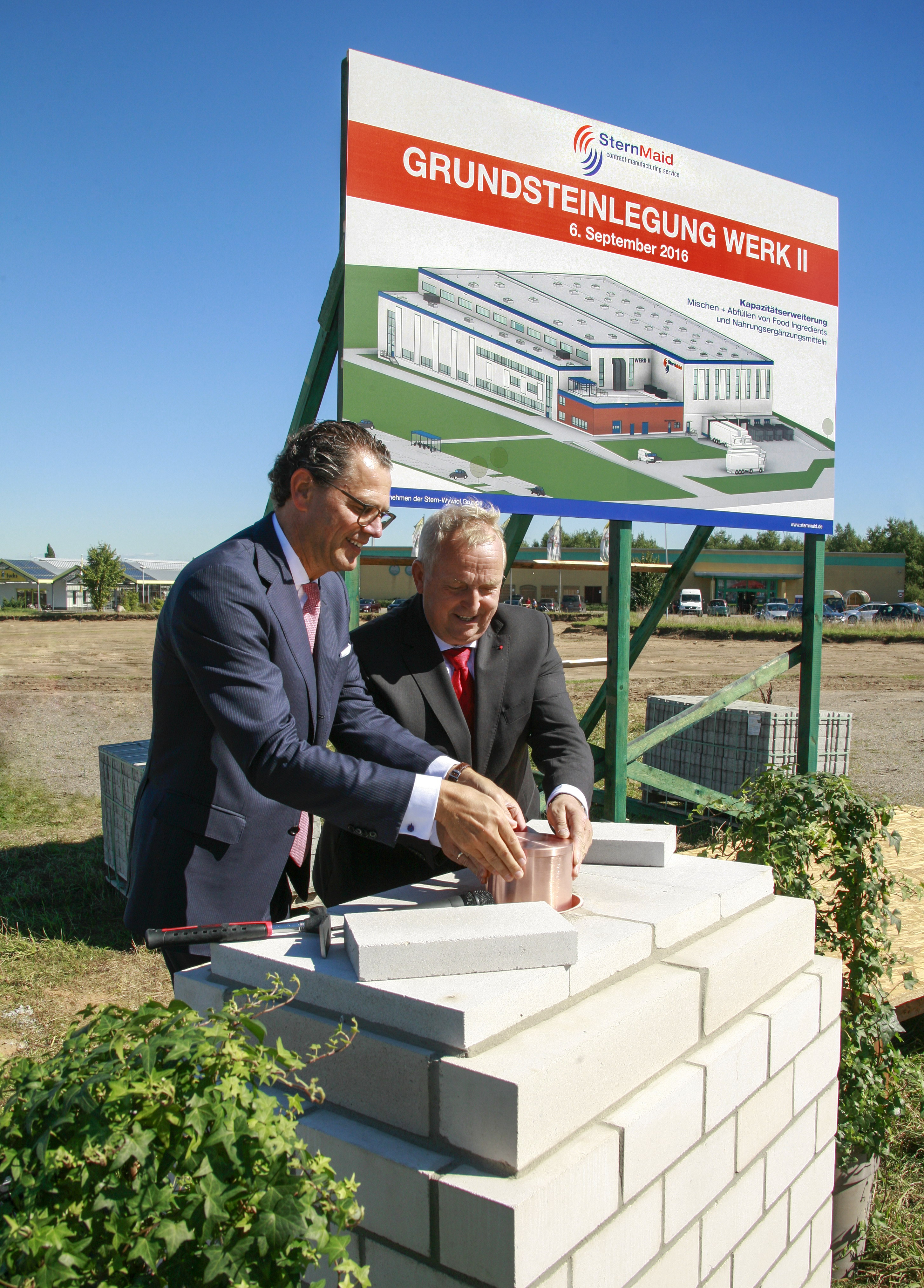 and guests to the foundation stone ceremony. In his welcome address, Torsten Wywiol again explained the reasons for building the new factory at an investment volume of 15 million EUR ($55.8 million) in 2016/2017: There is no more space left in the existing plant, and the demand for powder mixtures is growing all the time. "Never build small plants" – that was Volkmar Wywiol’s guiding principle when he took the huge step of building the original factory in Wittenburg. In 1998 it employed a staff of seven – the number has now risen to over 250. The new production facility will create a further 50 jobs.

In the initial phase a production and warehouse complex with a floor area of 5,000 m² will be built opposite Plant 1. With a total area of about 40,000 m² the site has further reserves for subsequent construction phases. In future, all the retail products in the company’s range will be manufactured in Plant 2. According to the current schedule, the construction work will take just under one year. The base area of the new buildings will be made up of about 2,500 m² for warehousing, 2,000 m² for production and 500 m² for technical equipment; the production hall is designed as a two-storey building and already offers space for further expansion.

As far as possible the two plants will work independently of each other. Plant 1 will in future focus on all products intended for further industrial processing, whereas Plant 2 will manufacture all retail products. For this reason, the small-pack filling lines currently in use will move into the new plant in 2017. The floor space thus released will be converted into blending and filling areas for industrial products. Separation of the two types of production will ease the logistic situation on the site, which is made difficult by the increasing volume of goods handled.

Personalization for fiber supplements necessary? Researchers and Sensus weigh in

Despite the type of supplement taken, people who consume a lot of fiber show the least changes in their microbiomes. This is according to research from US-based Duke... Read More

As the availability of omega 3 fatty acids appear to be threatened by declining and static fish populations and climate change, Xiaozao Technology aims to utilize a new... Read More

ADM is joining forces with Farmers Business Network (FBN) to bring a digital farm business management platform, Gradable, for farmers to have direct access to data that... Read More

Analysis of the prolonged droughts across the EU reveals a staggering portion of Europe is now critically exposed to high drought levels – classified as... Read More