17 Sep 2021 --- This week in industry news, Barry Callebaut is reviving a classic British chocolate brand. In snacking, Nutella launched a new dip and croffles were highlighted by Baker Time. Biotech company AgBiome raised US$116 million in a series D funding round, co-led by Blue Horizon and Novalis LifeSciences. DKSH entered a distribution agreement with dairy specialist Valio to provide its products in key markets across Southeast Asia and Taiwan.

In brief: Sweet highlights
A classic British chocolate brand founded just after World War II is to be revived by Barry Callebaut. After being invented and produced in High Wycombe in 1945, Stewart & Arnold chocolate will now be made in Barry Callebaut’s factory in Banbury, Oxfordshire, UK. Artisans across the country will use the range to create confectionery, bakery and pastry goods. 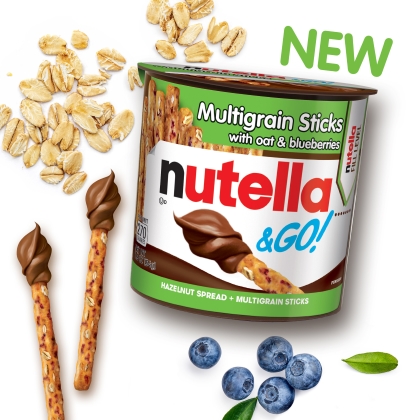 Nutella & GO! Multigrain, featuring Nutella on one side and hearty multigrain sticks with oat and blueberries on the other.Baker Time has announced the launch of its brand, highlighting its latest snack food, croffles. Baker Time is Indonesia’s artisanal croffles inspired by Japanese desserts and snacks, such as matcha dipping sauce, cheese brûlée, karaage bites and crispy chicken burgers. Crafted with croissant dough pressed in a waffle maker, croffle, or a combination of croissant-waffle, it brings a sweet blend of soft and flaky features of a croissant with the crisp and sweetness of a waffle. The distinctiveness of croffle is shown through Baker Time’s selection of toppings, which are served in both sweet and savory flavors.

In brief: Business strides
AgBiome will be using its new US$116 million capital raise to rapidly expand its product portfolio of naturally derived crop protection products, scale its scientific and commercial teams, and continue to build its global presence and partnerships. The growing global population, increased demand for clean, healthy food, and pressure to reduce agricultural chemical applications have created a need for sustainable and environmentally compatible crop protection.

DKSH’s Business Unit Performance Materials, a distributor of specialty chemicals and ingredients, will provide marketing and sales, distribution and logistics, business development, and customer management for Valio’s milk powders in Thailand, the Philippines, Malaysia, Singapore, Vietnam and Taiwan. Valio, a Finnish dairy and food company, has operated in the Southeast Asian market for years. The purity of its ingredients is attributed to a clean Arctic environment, quality animal welfare standards and responsible milk production. DKSH was chosen for its food and beverage industry expertise and proven track record as a key distribution partner in the Asia-Pacific region.

Food company GEA is further expanding its market position with “one of the most significant orders” in its history. Novozymes, a supplier of enzyme and microbial technologies headquartered in Denmark, has entrusted GEA with the turnkey fitting of a major new plant to produce plant-based proteins for the plant-based food industry. The volume of this order is well into the high double-digit million-euro range. Building the new factory in Nebraska, US, will start later this year and is expected to be completed toward the end of 2023.

In brief: Acquisitions
Feel Foods has entered into a share exchange agreement with Black Sheep Vegan Cheeze Company, a British Columbia vegan cheese company, and the shareholders of Black Sheep to acquire all of the issued and outstanding common shares of Black Sheep.

MeaTech 3D announced that its Belgian subsidiary, Peace of Meat, has cultivated just over 700 g of pure chicken fat biomass in a single production run. This achievement is believed to be the first public demonstration of growth in a single run of this quantity of 100% pure cultivated cell biomass, grown entirely outside of an animal. While many consumers currently enjoy plant-based meat alternatives, many find it falls short of replicating the “meatiness” of conventional meat. MeaTech believes that real cultured animal fats can potentially deliver the signature flavors, aromas and textures currently derived from traditionally farmed meat, thus delivering an enhanced consumer experience when combined with plant-based ingredients.

German GEA Group, a supplier of systems and components for the F&B sector, and Israeli start-up Better Juice have established a novel facility in Germany to test... Read More