You are in : All News > US Dairy Industry: Innovation and Diversification Will be Key to Growth

US Dairy Industry: Innovation and Diversification Will be Key to Growth 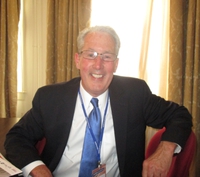 29 Jun 2015 --- US veteran of the dairy industry Rick Smith has a wealth of knowledge and experience in milk, cheese and dairy and intricate knowledge of how the US dairy industry works. Today, he is chairman of one of America’s largest dairy cooperatives, Dairy Farmers of America. At last week’s Global Dairy Congress, Smith spoke to FoodIngredientsFirst about how this fragmented industry can keep up with the times through innovation and cooperation.

The US dairy industry is catching up with the times. In what has traditionally been a very local market, with big dairies and cooperatives based largely very localized, production is spreading and people are changing their mind set to incorporate a bigger picture.

Smith talked about how the industry is changing: “The mind set in the US is more globally oriented now. Just five or ten years ago, any surplus would be sold to the government. Today, producers are looking abroad to sell their surplus.”

“They are also looking beyond just milk. But it has taken time to innovate. Why? Well, there has been so much competition at the farm gate that producers spend most of their time tackling that issue, rather than taking time and resources to innovate,” said Smith.

In the last 10 years things have really changed, says Smith, but the US is still largely a domestic market. It will take a long time, maybe more than a decade before the US exports a majority of its milk. However, according to Smith, the US would be involved in the global dairy industry if it never exported a drop, because the global players are in the US.

In today’s climate, US dairies have a lot to think about. Despite the fact that most of its production remains domestic, the global market place is having an impact on the US industry. The Russian import ban, for example, is having an indirect effect on sales, not least because of European producers coming to the US and Mexico with their surplus.

“Russian trade sanctions have indirectly impacted the US industry. European suppliers can’t now go into Russia, so they’re treading on US toes, particularly European products now going into Mexico, which is the US’s biggest market. This is driving prices down.”

While the US industry will be doing all it can to move forward, there are barriers, not least when it comes to consolidation. In stark contrast to the European dairy market, which is dominated by a few big cooperatives, the US authorities have very strict rules on consolidation.

“In other markets, cooperatives are allowed up to 80% dominance, in the US, 20% would be considered too high,” explained Smith. This also explains the fierce competition at the farm gate.

There are around 151 dairy cooperatives in the US, which produce around 85% of the milk. Dairy Farmers of American produces around 22% of the milk in the US. Of that amount, the association’s 100 biggest farms produce the same amount as 7,000 small farms. Some 75% of the milk comes from 1,100 farms, which have an average of 13,000 cows. The size of the farms is set to grow, particularly in the east, where farming is growing, due to difficult conditions in the west of the country. The drought in California is a case in point here.

So if consolidation is difficult and competition hinders innovation, where are dairies going to find their growth? Innovation and diversification, says Smith. “In recent years, the industry has retooled its faculties. DFA has built a factory that makes skimmed milk to world specifications,” said Smith. This is an example of the industry looking and being prepared to go further afield with its products.

“If the US grows its milk pool by 1.5% and consumption only grows by 1%, that’s one billion pounds of milk that needs to be exported. Producing for a foreign market has to become part of the plan. We are seeing Californian cheese, made with Californian milk that is being sold in Oceania,” explains Smith.

The industry has also been seen to tap into recent trends. “We have seen a rise in protein products and plant proteins are also a big thing, but they do not have the nutritional content of cow’s milk. Almond milk; its’ not milk and we are actually being helped here by the media, rather than being hindered.”

“The rise in Greek yogurt and Greek products has been phenomenal, and while organic has been significant, it has not really caught on as much as other trends. Part of the problem,” says Smith, “is with supply. Organic suppliers are very small and they have an inefficient supply chain, so it is hard to manage.”

It seems from what Smith is saying that traditional milk is here to stay. He lists the trends for gluten-free, lactose-free, organic and plant proteins, but dismisses them as quickly. “Marketers want to differentiate themselves, but consumers are having an overload. There is often far too much choice. Just look at buying a simple orange juice. Consumers are faced with organic, pulp, no pulp, added calcium, etc. They just want a simple product.”