You are in : All News > UK: Tesco biggest ever meat-free Christmas range 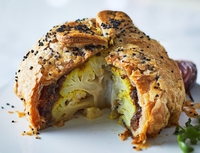 As the number of vegans and vegetarians continues to rise alongside the growing number of people looking to cut down on meat and dairy in general, the UK supermarket has responded by expanding its festive offerings.

In the last year demand for vegetarian and vegan food has soared and Tesco is seeing the effect of lifestyle choices like Meat Free Mondays and flexitarian diets with sales of chilled vegetarian ready meals and meat substitutes growing by 25 percent.

For vegetarians, there’s a Portobello Mushroom Wellington made with spinach and bursts of cranberry in rich puff pastry and also a Festive Nut Roast with a mulled wine and cranberry glaze.

And for the first time ever Tesco has two vegan Christmas dinner centerpieces – Turmeric Spiced Cauliflower Wellington and a festive Pecan and Peanut Roast with maple-roasted carrot and parsnip.

He is now working with suppliers, farmers and chefs on developing exciting new foods that go on sale over the coming year.

“These are changing times and vegetable dishes have now become centerpiece heroes in their own right on dinner tables up and down the country,” says Chef Derek Sarno.

“We think that our Portobello Mushroom Wellington is so delicious that it may tempt diners to try something different this Christmas.”

“This year, Tesco’s Christmas campaign celebrates the many ways we come together at Christmas, and with the quality of vegetarian and vegan food now so good there may even be squabbles across the dinner table over who gets what.”

Tesco has been catering for the increasing amount of vegan customers throughout the year and is offering its biggest ever range of vegan products.

It recently increased its range of dairy-free cheeses to nine and among the new additions are a melty red Leicester for cheese on toast, Mozzarella to top pizzas, a jalapeno Cheddar, a blue cheese and Cheddar. It has also launched eight new milk free desserts to cater for vegans.

“With demand for vegetarian and meat-free alternatives rising, it’s great to see supermarkets across the UK like Tesco working hard to keep their customers happy and increasing their vegetarian range,” she says.

“Offering customers a better choice is especially welcome at Christmas.”

In addition, the supermarket also signed up to The Food Foundation’s Peas Please pledge, focused on making it easier for more people to eat more vegetables, in October.

15 Jan 2021 --- Europe’s plant-based industry leaders are hitting back at a proposed amendment to a ban that would extend restrictions of the “imitation or... Read More

15 Jan 2021 --- This week, PepsiCo revealed plans to double its climate action goals and pledged net-zero emissions by 2040. Campbell Soup announced it would close its Georgia, US... Read More

14 Jan 2021 --- Swedish ice cream brand Nick’s has landed US$30 million in funding to expand its production capacity, as well as its global reach with US and Germany at the... Read More