You are in : All News > Sugar and Carbohydrates Play a Key Role in Consumer Health Concerns 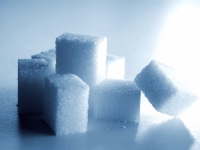 19 Nov 2015 --- New quantitative consumer research commissioned by functional ingredients manufacturer BENEO shows that consumers perceive sugar as both a ‘friend and foe’ in their nutrition. The results also underline that sugar and carbohydrates play a key role in consumer behaviour when dealing with health concerns.

More than 5000 consumers across five European countries  were surveyed on their perception of sugar, carbohydrates and nutrition, with regard to blood glucose response.
The results show that consumer health concerns in order of importance are weight management (43%), fatigue or low energy (36%) and stress (35%). Consumers are aware that the amount and type of sugars, as well as carbohydrates in general, play a major role in coping with these health issues. 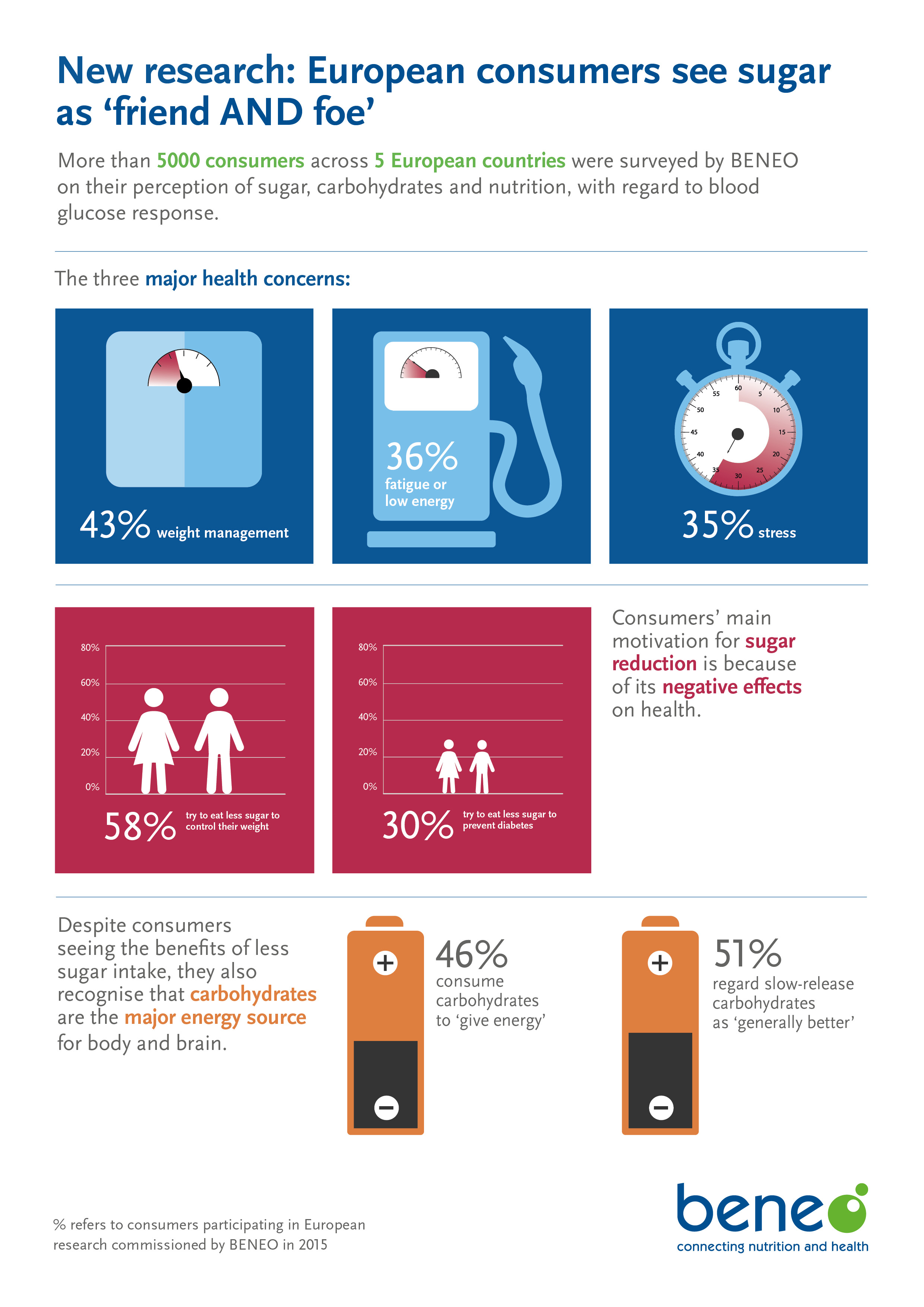 Consumers’ main motivation for sugar reduction in their nutrition was because of its negative effects on their health. 58% of those respondents who wanted to eat less sugar said that their major driver was to control their weight.  Also, the detrimental long-term effects of sugar consumption such as diabetes were a concern, being mentioned by nearly one out of three consumers who were trying to cut their sugar intake.

Although wanting to reduce the amount of sugar consumed, respondents were not prepared to forego the feeling of sugar-like indulgence: 60% said that they ate sugar because they liked the taste and one out of three participants (33%) responded that sugar improved their overall mood.

Despite consumers seeing the benefits of less sugar intake, they also recognised that carbohydrates are the major energy source for body and brain. 46% of respondents stated that the main reason they consumed carbohydrates was that they “give energy”. At the same time, consumers are starting to differentiate between different types of carbohydrate, with more than one out of two participants making a distinction between ‘good’ and ‘bad’ carbohydrates.

Choosing ingredients such as the slow release carbohydrate Palatinose™ (isomaltulose), the chicory root fibres Orafti® Inulin and Oligofructose, or the sugar replacer ISOMALT, can help manufacturers to meet consumer demand for alternatives that support healthy weight and energy management. These functional ingredients are naturally derived from beet sugar and chicory root. Having a mild sweet taste they help meet consumer desire for sugar-like indulgence, while improving the nutritional profile by reducing high glycaemic sugars and/or calorie count. BENEO has received positive EFSA opinions for the blood glucose lowering properties of its dietary fibres oligofructose and inulin, as well as for the unique slow release carbohydrate Palatinose™ and the sugar replacer ISOMALT with corresponding health claim approvals.

Gudrun Dold, Consumer Insights Manager at BENEO: "The research results show that sugar and carbohydrates play a decisive role in daily nutrition.  Although consumers want to eat less sugar, they do not want to sacrifice that all important sugar-like taste and indulgence.  Consumers are also beginning to distinguish between ‘good’ and ‘bad’ carbohydrates, making it even more important for producers to consider the quality of the carbohydrates used, when developing game-changing food and drink products for every lifestyle and age group.”

Our portfolio offers an opportunity to create all-natural, non-GMO or organic products that are non-cariogenic, gluten and lactose-free, fiber-enriched, fat and sugar reduced, easily digested, energy sustaining and calorie smart, as well as supportive of fat oxidation – all without compromising taste, texture or mouthfeel. Our ingredients can be used in applications like dairy, confectionery, bakery, cereals, soups & sauces, meat & vegetables, baby food, and beverages.

Formed by a merger of the companies Orafti, Palatinit and Remy in 2007, Beneo is a 100 percent subsidiary of the Südzucker Group and has over 100 years experience with functional ingredients.

Through a unique chain of expertise, including Beneo-Institute and Beneo-Technology Center, the company supports customers throughout the entire product development process: ranging from new product ideas and concept development based on consumer insights and market research to nutritional science by providing regulatory advice and facilitating the formulation of successful products.

Functional fibres: Orafti® inulin and oligofructose are prebiotic fibers extracted from the chicory root. These fibers do not only promote optimal intestinal functioning but also act as prebiotics that promotes the growth of ‘good’ bacteria (Inulin: EFSA claim on prebiotic wellbeing available). Both ingredients allow for an EFSA claim on blood sugar management as they support a lower rise in blood glucose levels and a lower insulin response.

Functional carbohydrates: Palatinose™ or isomaltulose is a low-glycaemic and fully-digestible carbohydrate derived from the chicory root. What is special in comparison to other carbohydrates is that it releases its full carbohydrate energy (4kcal/g) more slowly and in a more balanced way (EFSA claim available). It improves fat oxidation during physical activity, leading to a sustained energy supply. Being acid stable, the food maintains its osmolality – an advantage, especially in sports beverages. In addition, it is a non-cariogenic ingredient.

Functional protein: Beneo’s Vital Wheat Gluten is a source of essential amino acids which the body cannot produce itself. Apart from their nutritious benefits, they improve the taste and texture of bakery goods, ready-to-eat meals, meat-based products, etc. Consequently, the sustainable sources of BeneoPro VWG have been allocated the IFS label, an acknowledged reference for high-quality ingredients.

Following its acquisition of Meatless earlier this year, ingredient player Beneo is showcasing its latest meat alternative offering of plant-based chicken chunks at this... Read More

Sophie’s BioNutrients unveiled a sustainable and nutritious ice cream in collaboration with the Danish Technological Institute (DTI) and Painfree Chocolate was... Read More