You are in : All News > Securing a sustainable future for cocoa: Nestlé and Mondelēz publish plans to eliminate deforestation 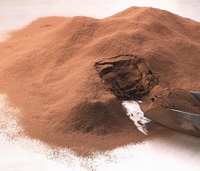 06 Mar 2019 --- Nestlé and Mondelēz International have laid out action plans to expand programs to combat deforestation in West African cocoa-growing regions. As part of a drive to scale-up their efforts to eliminate deforestation and restore forests in the Côte d’Ivoire and Ghana, some of the biggest players in the cocoa supply chain are publishing their pledges on how to move towards deforestation-free commodities by 2020, while also improving transparency and traceability in the cocoa supply chain.

In what is being touted as a “milestone moment” in the West African cocoa supply chain, the country’s governments and 33 companies have come together in a pioneering commitment. They promise no further conversion of any forest land for cocoa production and have pledged to eliminate illegal cocoa production in protected areas, as well as a range of other initiatives.

Nestlé has rapidly followed up with the Nestlé Cocoa & Forests Action Plan which forms part of the company’s commitment to support the Cocoa & Forests Initiative, the new public-private partnership. Nestlé is also disclosing its cocoa suppliers in Ghana and Côte d'Ivoire to increase transparency.

Nestlé highlights that it is already using a combination of tools to accelerate deforestation elimination, including certification, supply chain mapping and satellite imagery.

“Cocoa grown illegally in protected areas has no place in our supply chain. We are working to stop deforestation and the destruction of other natural habitats from our agricultural commodity supply chains, including cocoa,” says Alexander von Maillot, Head of Confectionery Strategic Business Unit, Nestlé S.A.

“Addressing the issue of deforestation in cocoa is complex and is a shared responsibility. We welcome the Cocoa & Forests Initiative, which brings together all the relevant stakeholders and are determined to contribute to a sustainable cocoa sector where the protection of the environment is aligned with the social and economic development of cocoa farmers and producing countries,” he explains.

Significant activities under the Nestlé Cocoa & Forests Action Plan include:

- Completion of the mapping of all 87,000 farms that are part of the Nestlé Cocoa Plan and strengthening of cocoa beans traceability systems by 2019;

- Implementation of an exclusion process for farmers who grow cocoa in protected areas from Nestlé’s supply chain by 2020;

- Sensitization of 38,000 farmers on forest law enforcement in place in both countries as well as the importance of protecting forests by 2022;

- Carrying out two agroforestry pilots, a smart integration of trees into farming systems by 2022;

- Promotion of the financial inclusion of at least 8,700 farmers by supporting the creation of village savings and loans associations by 2022;

- Distribution of 5,000 improved cook stoves by 2021 to reduce pressure on forests and improve the community’s health.

Meanwhile, Mondelēz has also published its ambitious plans to protect and restore forests in a bid to secure a sustainable future for cocoa. The confectionery giant also says its making farms in its two largest cocoa-sourcing markets more resilient to climate change. The plans also cover Indonesia.

As one of the world’s largest chocolate makers, Mondelēz says it has been using its scale to drive change in the cocoa supply chain for many years and launched its 10-year, US$400 million Cocoa Life program in 2012 with the aim to reach more than 200,000 farmers across six countries.

In 2015, it was also the first company to raise the issue of deforestation in the cocoa industry at the COP21 summit in Paris and the first chocolate maker to sign a Memorandum of Understanding (MoU) with the governments of Ghana and Côte d’Ivoire.

Publishing its action plan is its latest move towards creating a sustainable cocoa supply chain in key sourcing countries which have suffered as a result of deforestation.

“Ending deforestation is a complex social, economic, and environmental challenge. As we now turn to implementing the commitments of the Cocoa & Forests Initiative, we will need all stakeholders to be adaptive, flexible, and patient,” WCF President, Rick Scobey, tells FoodIngredientsFirst.

“We will all likely make mistakes and will need to adjust our plans and timing as we work and learn with farmers, communities, and other local partners on the ground.”

“There is a Guinean proverb, ‘Judge each day, not by the harvest, but by the seeds you plant.’ As a result, companies and governments are stepping up – we hope that development partners, environmental organizations, and other stakeholders will join us on this difficult and complex journey. Let's work together to plant the right seeds and nurture them to grow in a sustainable cocoa and forest landscape.”

The initial action plans of the companies include a commitment to mapping the GPS location of one million farms and complete deforestation risk assessments near protected areas by end-2019.

Côte d’Ivoire and Ghana, which produce about 65 percent of the global cocoa supply, have lost 17 percent and 13 percent of their forest cover, respectively, from 2001 to 2017, primarily as a result of agricultural encroachment. It is estimated that at least 2.3 million hectares of the Upper Guinean rainforest in Côte d’Ivoire and Ghana have been cleared for cocoa farms between 1988 and 2007.

“Mondelēz International is a key partner in the Cocoa & Forests Initiative in Côte d’Ivoire. Their action plan is in full compliance with the strategy of preservation, rehabilitation and scaling up adopted by the Government in January 2019,” says Alain-Richard Donwahi, Minister of Forests and Water Resources, Côte d’Ivoire.

“Together, we hope to create a dynamic and solid cocoa supply chain while transforming the livelihoods of farmers and their communities,” he adds.

As a founding member of the Cocoa and Forests Initiative (CFI), the company's action plans align to the CFI’s three focus areas of Forest Protection & Restoration, Sustainable Production & Farmers' Livelihoods and Social Inclusion & Community Engagement, and feature the following commitments:

- Mondelēz is the first chocolate company to commit to map 100 percent of the farms in key origins by end of 2019 to ensure that farmers are not operating in forested land. It has already mapped 70 percent of these farms, using Global Forest Watch to assess the risk of tree loss.

-  The company is the first organization to introduce incentives in the form of Payment for Environmental Services (PES) agreements to a cocoa-farming context, encouraging farmers to protect and restore forests. It aims to have agreements with 33,000 farmers by 2022.

- By 2022, almost 1,300 cocoa communities will have active forest restoration and protection programs through Cocoa Life.