You are in : All News > Scientists leverage resin system to transform wind turbine blades into edible sweets

24 Aug 2022 --- Researchers at Michigan State University in the US have found a solution for wind turbine blades that end up in landfills - turning them into gummy bears.

The scientists manufactured a resin to create the new blades which were found to have many different uses, one of them being the creation of new food ingredients.

While dissolving the thermoplastic resin in an alkaline solution (such as an ordinary baking soda), it released poly(methyl methacrylate) (PMMA), which was then used to produce potassium lactate.

The compound can be purified and made into sweet treats such as candies and sports drinks.

“We recovered food-grade potassium lactate and used it to make gummy bear candies, which I ate,” comments John Dorgan, Ph.D., head of the research project.

While wind turbines are a green energy alternative, often, when they are no longer serviceable, they end up in landfills. Scientists found a solution for wind turbine blade waste in food.

Scientists have found a few solutions to make turbine blades re-usable by using a composite resin to create them initially. After the blade has served its purpose, its materials can be chemically and physically broken down to create new items such as gummy bears, as well as countertops, car tail lights and diapers.

Yet some might have reservations about consuming what used to be a wind turbine.

Concerns about eating machinery
Some consumers may hold some reservations when it comes to eating something that was once machinery. However, Dorgan has a point regarding the safety of eating goods containing potassium lactate from his wind turbines.

“A carbon atom derived from a plant, like corn or grass, is no different from a carbon atom that came from a fossil fuel,” Dorgan explains. “It’s all part of the global carbon cycle, and we’ve shown that we can go from biomass in the field to durable plastic materials and back to foodstuffs.”

More specifically, potassium lactate has antimicrobial properties. It is a clear and odorless liquid used to adjust the acidity levels in food, which is commonly used to prevent food spoilage and pathogenic bacteria. 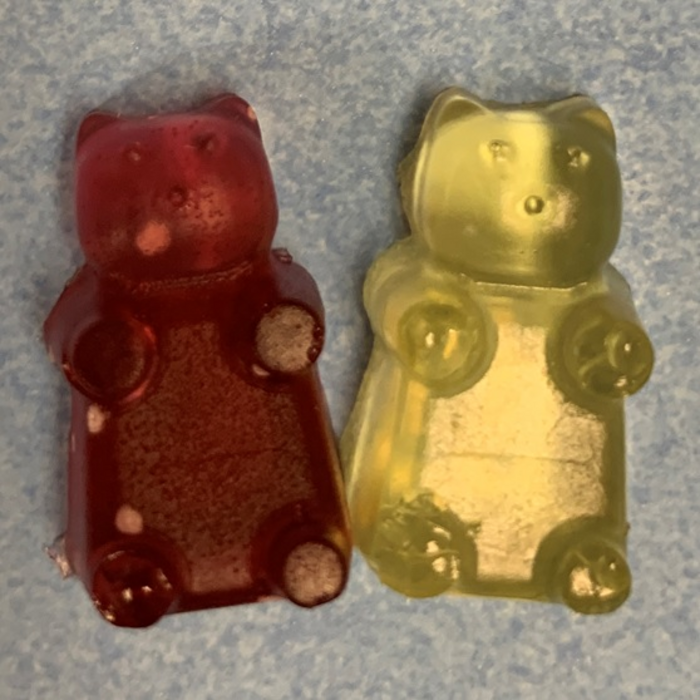 Gummy bears made from wind turbine blades. (Credit: John Dorgan)
The amount of turbine blades that will end up in landfills is only projected to increase. The projection is because larger wind turbines are more efficient and will replace the current sizes, while still functioning efficiently.

“Often, wind farms will actually replace the turbine blades before the end of service life because the farms can generate more electricity with bigger blades.”

However, when not used for edible treats, the materials are reused repeatedly by dissolving the polymer with monomers, giving wind turbines reusability and a much longer lifespan than they currently possess.

“The beauty of our resin system is that at the end of its use cycle, we can dissolve it, and that releases it from whatever matrix it’s in so that it can be used over and over again in an infinite loop,” concludes Dorgan.

This is not the first time scientists have played with the idea of consuming inedible objects into food for circularity. British researchers previously developed a novel way to use plastic waste as a food industry resource by converting post-consumer PET into vanillin via a series of chemical reactions.

The team from the University of Edinburgh lab-engineered E. coli to transform terephthalic acid – a molecule derived from PET – into the molecule known for giving vanilla its characteristic taste and smell. The scientists demonstrated the technique by converting a used plastic bottle into vanillin.