FoodIngredientsFirst attended the live inauguration yesterday, which kicked off with opening remarks by Canadian Prime Minister Justin Trudeau on the role of the “Silicon Valley of plant protein” in safeguarding the future of sustainable food.

“I grew up on a farm making produce. We didn’t grow peas, we grew corn, beans, barley and wheat,” remarks astronaut Hadfield.

Virtual simulation of the Roquette offices.“I think if we take the foundational ideas of farming – thousands of years of agriculture – and look at the new demands of the world, with a population that’s approaching 8 billion, we can’t repeat the patterns of the past and expect that to work indefinitely into the future,” he stresses.

“We have to be ready to adapt and build. That’s true in space exploration, in the life of an astronaut. But it’s also true at the Plant for the Future.”

At the opening ceremony, Hadfield performed a rendition of Space Odyssey by David Bowie, spinning the lyric, “take your protein pills and put your helmets on.”

Functionality for the future of food
With this new facility, Roquette has largely exceeded the half a billion euros investment in plant proteins it had targeted in the period 2015 to 2020. This includes equity investments, acquisitions, upgrades to the plant in Vic-sur-Aisne, France.

The new plant is situated just outside Winnipeg in Portage la Prairie, Manitoba, in the Canadian Prairies. The region notably produces more peas than any other in the world at farms within a day’s drive of the plant. 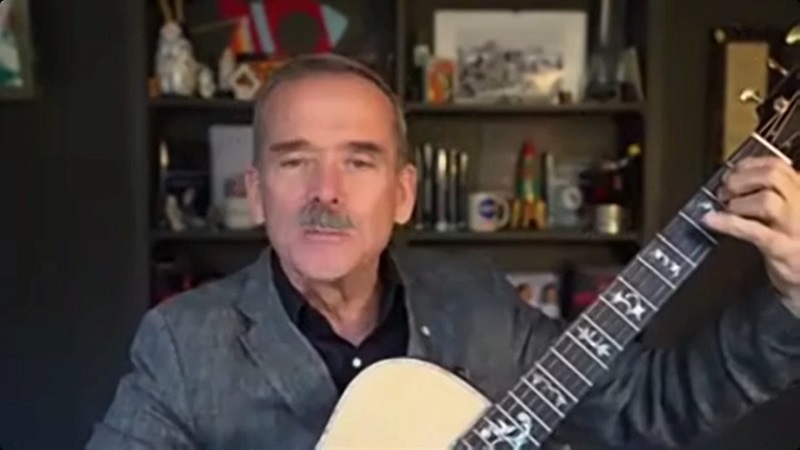 Astronaut Chris Hadfield performs a rendition of Space Odyssey by David Bowie.With easy access to the US and international markets by road, rail and air, the 200,000 sq ft facility has the capacity to process 125,000 metric tons of yellow peas per year. When combined with Roquette’s plant in France, the company’s capacity now rises to 250,000 metric tons of peas per year.

“This plant is an engineering marvel. We are entering into the next level of quality, efficiency and commitment to the market. The design of the plant is a proof-point of our sustainable development approach, with 100% hydroelectricity power and optimized water management,” says Dominique Baumann, managing director of Roquette in Canada.

“Nutritionally, peas are an excellent protein source. They’re high in fiber and low in fat. On the farm, peas are more environmentally sustainable. They require less water to grow than most other crops, and farmers like that they use less nitrogen fertilizer, while they also naturally produce compounds beneficial to soil health.” 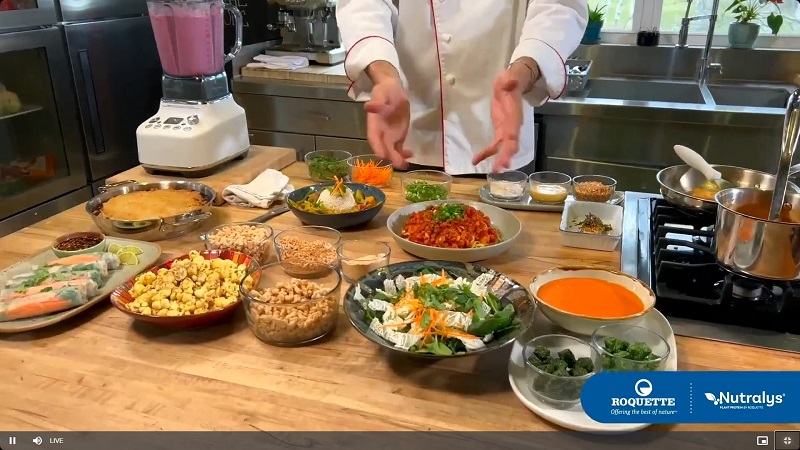 Chef Michael Smith presents a range of dishes made with yellow pea protein.“The food revolution is upon us,” he underscores. “The world of gastronomy has changed the expectations of consumers and what they think food is and where it comes from. Climate change is real. When we look closely at climate change we understand that our food systems are the single biggest contributors.”

“Don’t get me wrong, I am not anti-meat. I am grilling steaks for the rest of my life, but even in my world, I’m eating less meat than ever before,” he adds. “And as a farmer myself, I know what legumes do for the soil. These are net-positive for the environment. Legumes like yellow peas put more into the soil than they take out.”

Reimagining classic recipes
Chef Smith highlights the simplicity of integrating vegetable protein into everyday meals, such as in stirring the ground pea powder into a vegetarian Thai curry sauce. Pea powder can also be added to smoothies or used as a substitute for meat in Bolognese sauce.

To elevate flavor in snacks, peas can be ground up with za’atar – a Middle Eastern culinary dried herb mix of oregano, thyme, marjoram, sumac and toasted sesame seeds – to be added to savory popcorn for an extra kick.

Among other applications, toasted yellow pea protein can replace the toasted rice powder used in Thai spring rolls for additional protein benefits. One step further, the peanuts that would normally be in the dipping sauce for these rolls can be replaced by nutritious peas.

Virtual auditorium of the live broadcasted inauguration event.Pea protein flour can also be used to substitute regular flour in cod fish breading. Similarly, in desserts, chef Smith details that a standard fruit crisp topping can be elevated by replacing its flour with yellow peas.

Cream of the crop
Demand for pea protein has been booming with multiple industry estimates expecting an annual global growth rate between 15 and 24% over the next decade, reports Roquette.

Over the summer, pea availability was hit by an exceptional drought in Canada. The country recorded a drop of 45% in its production and pea prices have drastically increased by 120% in comparison to last year.

“Diets have changed considerably in recent years, and the desire for alternative proteins continues to grow,” adds Pierre Courduroux, CEO of Roquette. “We see this as a transformational event in our history and a boost to the global plant-based food sector.”