You are in : All News > Ramadan and Eid al-Fitr marketing sees boost as the west takes note of the religious event’s potential

The US does not fully exploit Ramadan’s marketing potential, while in Europe this is still in a nascent stage

04 Jun 2019 --- As religious celebrations and eating are inherently connected, food and beverage products are often marketed to fit holidays such as Christmas, Easter and Hanukkah in a bid to pique consumer interest. Ramadan is a major religious event for the Muslim population, culminating in Eid al-Fitr. In the eastern part of the globe, many brands try to tap into Eid’s marketing potential. However, in the west, this space is still developing – with Europe and the US still trying to understand how to target this demographic. FoodIngredientsFirst looks at Ramadan related marketing efforts within the industry.

Ramadan 101
June 4th marks the last day of Ramadan for 2019 and Muslims around the world are preparing to celebrate the religion’s biggest holiday and break their one-month fasting schedule. During Ramadan, healthy Muslims are expected to refrain from eating or drinking anything during daylight hours. The fast exists as a reminder of those less fortunate and aims to reinforce kind and humble behaviors.

Traditionally two main meals are served; suhoor, which is served before dawn and iftar, which is served after sunset. During the fasting period, people are advised to pace themselves and not over-consume. Light dinners such as soups are especially popular, but of course, indulgence is the way to go for some.

What follows is Eid al-Fitr, which means “festival of breaking the fast” and marks the end of the fasting month of Ramadan. Eid is celebrated for at least two days as an official holiday in all Muslim-majority countries.

Ramadan’s commercial significance
The commercial aspect of Ramadan could be compared to the Christmas season in western countries where food commerce and seasonal NPD reach an annual peak. Eid-oriented marketing is becoming increasingly popular, as well with many brands and food chains linking their products to the holiday. From festive commercials to restaurant deals and new product launches, Ramadan and Eid-related marketing is an unexplored space, especially for the west. 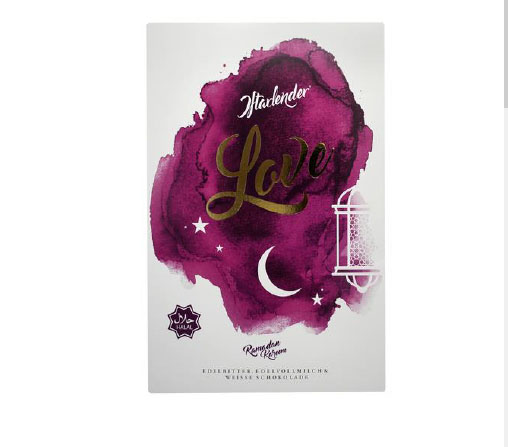 Click to EnlargeIftarlade has launched Love Ramadan Kareem Edelbitter Edelvollmilch And Weisse Schokolade: Dates In Fine Dark, Fine Whole Milk And White Chocolates.Estimates say that the “Ramadan Economy” is worth around £200 million (US$2,53 million) a year. Consumers’ purchasing behaviors during Ramadan are significantly influenced by advantageous pricing and promotions. In response to this, the industry has been offering a range of Ramadan-centric deals. For the past two years, there has been a significant increase in purchases made on deals and discounts during this period. A Google report found that there is a 40 percent increase in searches related to cooking on Google Search during Ramadan, while YouTube sees a 70 percent increase for cooking shows.

Ramadan-related marketing
Despite a limited number in new product launches, partly due to the fact that Ramadan food is mostly prepared at home, there are a few notable releases and brand promotions.

Coca Cola and Pepsi have both, in the past, released localized approaches to marketing for Ramadan, with commercials that feature long tables of food and families coming together to enjoy meals and their favorite soft drink.

In the UK, Sainsburys, Tesco and Asda have run Ramadan promotions in the past, taking note of the significant Muslim demographic the country has. However, Tesco did commit a “faux pas” back in 2017, with the launch of Smokey Bacon flavored crisps in a Ramadan display. The move led to controversy as consuming pork products is strictly forbidden within Islamic culture.

A promotional success story in this space is the Snickers Memahami (Snickers Understands) campaign. The company released a commercial video that chronicled the lives of two non-Muslims who tried the Ramadan fasting for the first time in order to understand what the Muslim population goes through.

As the holiday is also related to compassion and charity, some companies try to tap into this area as well. For example, Humanity First USA (HFUSA) along with support from Ahmadiyya Muslim Community USA, has launched a Fasting to Feed campaign during the final ten days of Ramadan 2019, in an effort to help Americans suffering from hunger.

Most launches and marketing approaches, however, originate from Muslim-centric countries and despite UK’s efforts in inclusivity, Ramadan marketing does not compare in scale to Christmas-related ones. In the US, the issue is even more pronounced as the attention Ramadan is given is negligent, despite the country’s significant Muslim demographic.

Stand out NPD
While limited, there is some notable Ramadan-focused NPD. With dates being a very popular food choice during Ramadan, due to their high sugar content that provide an instant energy boosts, it is no surprise that NPD has targeted this flavorful fruit.

Click to EnlargeErikli Dogal Kaynak Suyu: Natural Spring WaterShaly Co. has released Luxury high-quality Siwa dates in 1,600g cardboard packaging. The product is touted as able to reduce cholesterol percentage in blood and protect from heart disease as it contains pectin. It may also help in providing pregnant and lactating mothers with the required minerals and vitamins. In addition, it may help in preventing hair loss as it contains vitamin A and stomach inflammation, the company says.

Erikli Dogal Kaynak Suyu: Natural Spring Water has a special Ramadan packaging that is green and recyclable to boot. As hydration is important for health and during Ramadan it's forbidden to drink water during the day, the launch aims to remind consumers to stay hydrated.

09 Jan 2019 --- A ban of halal and kosher slaughter methods, which see animals killed without being stunned first, has come into effect in the Flanders regions of Belgium. Animals... Read More

06 Sep 2017 --- Synergy Flavours has developed a new range of natural chicken flavors that add an authentic taste to meat-free products. Adding to its diverse portfolio of... Read More

30 Sep 2016 --- Since August 2016, SternMaid America has been certified for contract manufacturing of foods and food supplements in organic quality. The seal of approval from... Read More