23 Apr 2019 --- Cheap broilers from discounters in Germany have been found to be 56 percent contaminated with germs that are resistant to antibiotics. More than one-in-three chickens are contaminated with germs that have resistance to antibiotics with the highest priority for humans. These are the primary findings of a Germanwatch investigation into chicken sold in some German supermarkets and indicates that antibiotics are overused at industrial poultry farms.

“We take the results of the investigation of Germanwatch seriously,” a spokesperson for Germany’s Federal Ministry of Food and Agriculture (BMEL), tells FoodIngredientsFirst. “The figures provided suggest that too many antibiotics are used in the poultry fattening and that the slaughtering and cutting companies must improve existing hygiene and management deficiencies in their farms,” they note.

“We expect business to comply with existing rules and regulations and to contribute to substantially countering the emergence and spread of resistance. To protect animals and consumers,” the spokesperson adds.

A total of 59 chicken meat samples from industrial meat production were examined for resistant pathogens.

Antibiotics with the highest priority for humans such as Colistin are used in humans as a last resort against infectious diseases when other antibiotics no longer work. Often such resistances can be disseminated across species to humans and animals.

Despite these “alarmingly high levels of contamination” with chicken meat, the German Federal Government has not taken efficient measures to combat resistance, according to the environmental and consumer organization.

The poultry meat samples originate from discounters and supermarket groups Edeka, Rewe, Lidl, Aldi and Metro, which together account for 90 percent of the total food market in Germany.

“The antimicrobial resistance will only decrease if the federal government bans critically important antibiotics with the highest priority for humans in animal factories. The government has to make all veterinary antibiotics so expensive that they are no longer prescribed to compensate for the consequences of catastrophic housing conditions and turbo breeding in cheap meat and milk production,” says Reinhild Benning, an agricultural expert at Germanwatch.

All chicken meat samples come from the four largest slaughterhouse groups (PHW Group, Sprehe Group, Plukon Germany and Rothkötter Group) for chickens in Germany. Germanwatch says that the largest market power slaughterhouses have the greatest responsibility in terms of health risks to consumers and to people in their supply chains, such as slaughterhouse workers, catching troops and employees in fattening businesses.

“Not only because it is a legal mandate, but above all, because we know and care about the importance of further minimizing the use of antibiotics in animal husbandry, we have recently completed the evaluation of the 16-AMG Amendment antibiotic rehabilitation concept,” adds the BMEL spokesperson.

“Various questions, including the resistance situation in poultry, were examined. The evaluation report can be published soon. If necessary, we will draw legislative conclusions from the results.”

The examination of chicken meat for antibiotic-resistant pathogens was carried out by the Institute of Pharmacy Pharmaceutical Microbiology at the University of Greifswald on behalf of Germanwatch.

However, in its statement to FoodIngredientsFirst, the BMEL spokesperson insists “too many antibiotics have no place in stables and especially in animals” and the government is clamping down on cutting antibiotic use in animal husbandry.

“The use of antibiotics as a growth promoter as well as for routine prophylaxis is inadmissible,” the spokesperson continues. “Antibiotics may be used in animals – analogous to humans – in principle only after veterinary prescription. There must be an indication that has been previously determined by the veterinarian.” 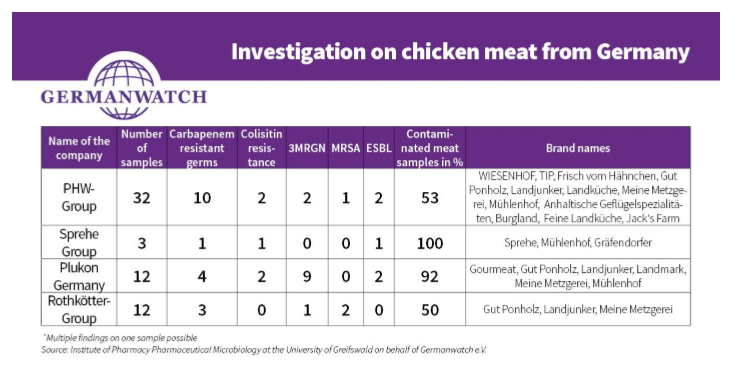 “Our Federal Ministry is working intensively – also internationally – on reducing the use of antibiotics in animal husbandry. At the G20 agriculture ministers' meeting last year in Argentina, the Federal Minister for Global Action promoted the restriction, as the participants of the meeting also acknowledged. At the second, International Conference of the World Organization for Animal Health OIE on Antibiotic Resistance in October 2018, the Federal Minister also presented the successful German Antibiotic Resistance Strategy,” the BMEL spokesperson adds.

Antimicrobial resistance (AMR) threatens the effective prevention and treatment of an ever-increasing range of infections caused by bacteria, parasites, viruses and fungi. AMR is an increasingly serious threat to global public health that requires action across all government sectors and society, according to the World Health Organization (WHO).

To help tackle AMR, last October MEPs backed plans to stop the spread of drug resistance from animals to humans by curbing the use of antibiotics on farms, keeping drug-resistant bacteria out of food. Veterinary medicines must not under any circumstances serve to improve the performance or compensate for poor animal husbandry, says the new law. It would limit the use of antimicrobials as a preventive measure, in the absence of clinical signs of infection (known as prophylactic use) to single animals and not groups.

FoodIngredientsFirst has reached out to several German discounters for their response to the Germanwatch investigation.

A new report from The Food Foundation highlights the urgent need for food businesses to transparently report on health and sustainability metrics. The... Read More

As the Intergovernmental Panel on Climate Change (IPCC) puts the finishing touches on part two of its Sixth Assessment Report – an assessment of the impacts of... Read More

This week in industry news, Arla signed a global declaration to reduce the overall climate impact from dairy farming, while Ingredion and Batory Foods revealed they... Read More

Eat Just has revealed that its Good Meat division has secured US$97 million in new funding, adding to the initial US$170 million publicized in May. Good Meat will use... Read More