You are in : All News > Plant-based breakthrough: Vivera brings vegan steaks to European market

15 May 2018 --- Dutch manufacturer Vivera has announced that it, as the first company in the world, will bring 100 percent plant-based steak to the European market. Vivera has already started production and expects to produce several million pieces in 2018 alone. The company currently has an output of more than 1 million meat replacements a week, making it one of the three largest producers in Europe. Vivera sees a strong growing international demand for plant-based products and has been one of the founders of meat alternatives in Western Europe since its foundation in 1990.

The market for vegan-friendly products has seen rapid growth in the past years. New launches are rife in a range of product categories from dairy alternatives to meat analogs, with companies seeking to recreate the “real thing” – i.e., animal-derived products – using new processing techniques and innovative ingredients.
The growing popularity of new product development on vegan platforms is substantiated by new product launch data from Innova Market Insights, which note a 58 percent increase in product launches recorded with a vegan claim in 2015 from 2014, with a further 35 percent increase in 2016 from 2015.
British supermarket chain Tesco is set to become the first to sell the ground-breaking product as of 21 May 2018, and the steak will be stocked in more than 400 supermarkets in the UK. In June 2018, several supermarket chains will follow in the Netherlands and from the second half of 2018 Vivera will also sell the product in other countries in Europe, starting with the German, French and Italian markets. Only plant-based ingredients like wheat and soy are used in the production. This allows both vegetarians, vegans and flexitarians to enjoy this 100 percent plant-based steak. 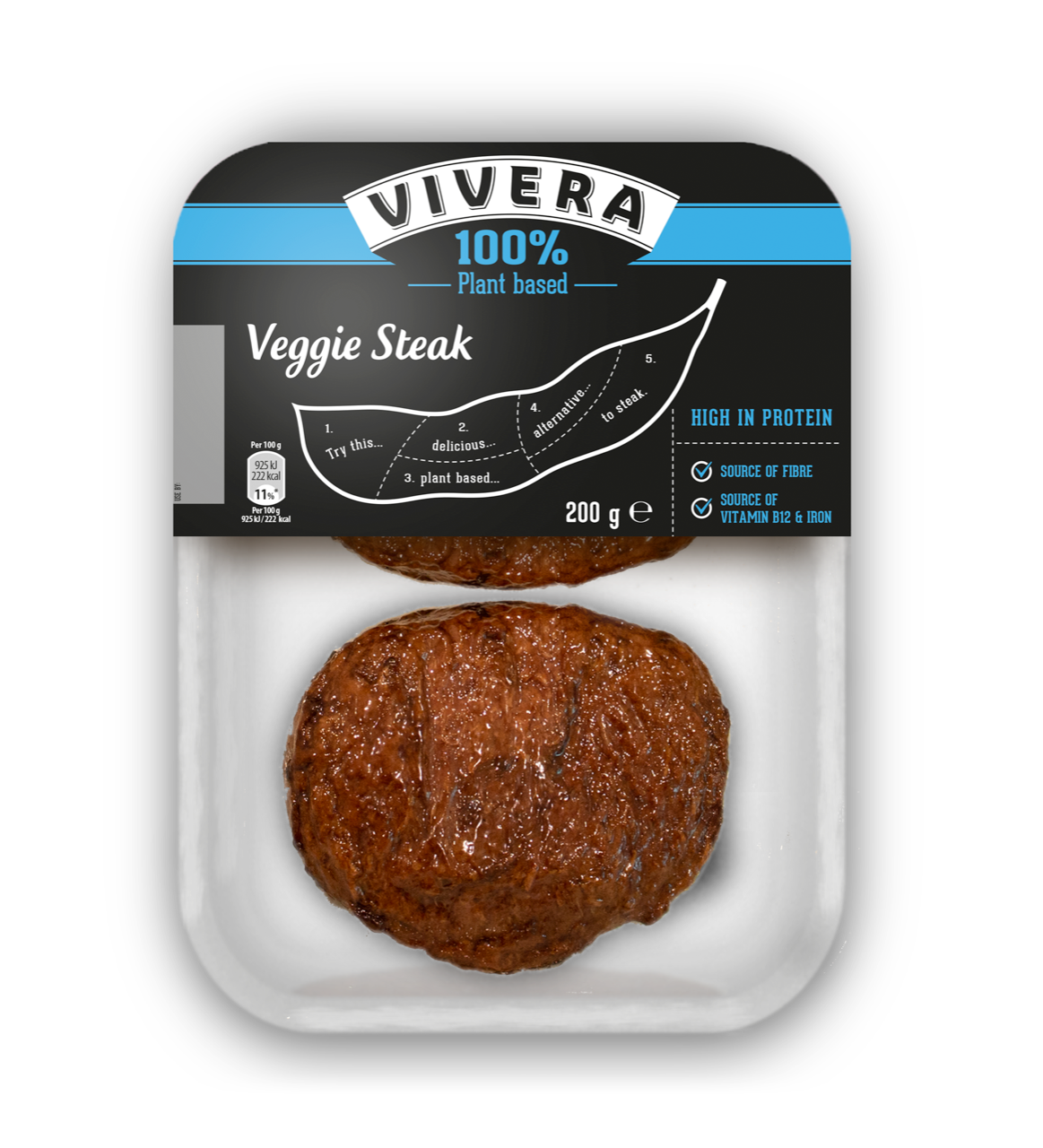 Tesco has made significant moves in bringing plant-based food to the mass market this year and is likely to expand into this space even further. In January, the retailer launched its Wicked Kitchen, developed in collaboration with chefs Derek and Chad Sarno.
Back in 2016, FoodIngredientsFirst spoke with Gert Jan Gombert, Commercial Manager at Vivera, who said: “The market is exploding in Europe at the moment. There is a tendency of people wanting to eat less meat for different reasons, whether it is health, sustainability or animal welfare. In the last three years, and particularly in the last year, you all of a sudden see a huge demand for meat alternatives.” You can view the full video interview with Gombert here.
“A large group of vegetarians, vegans and flexitarians has been very interested in such a product for years. With the breakthrough of its market introduction and large-scale production, a large group of consumers can enjoy this very tasty plant-based product. The smell, taste and bite can hardly be distinguished from real steak and we are convinced that this product will meet a large need of consumers. It is very important that we eat less meat, both for our health, animal welfare and for our planet. Innovative and high-quality plant-based products can make a significant contribution here,” comments Gombert.
Large-scale production
The development of plant-based steak in mass production fits in the growing popularity of healthy and high-quality meat replacements. Consumer interest in healthier and sustainable food is significantly increasing in many parts of Europe. As the world's meat production is projected to double by 2050 according to FAO (Food and Agriculture Organization of the UN) the availability of meat alternatives becomes more relevant than ever before. Consumption of plant-based meat alternatives can significantly reduce the environmental impact and the use of scarce resources like water and farmland.
The focus of Vivera is to establish a 100 percent plant-based product portfolio before the end of 2018. Its current product portfolio consists of more than 40 different meat alternatives. The company mainly uses soy but is also increasingly working with various other alternative proteins, such as rice, lupin and potentially seaweed. 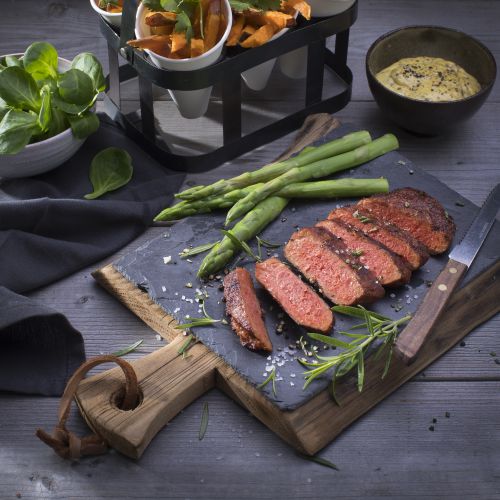 Vivera will officially present its plant-based steak at the PLMA exhibition at the RAI Amsterdam in the Netherlands later this month (29 & 30 May).
FoodIngredientsFirst has reached out to Vivera for further details.
In March, earlier this year, Moving Mountains launched the B12 Burger, the UK’s first vegan-friendly burger that “bleeds,” thanks to the addition of beetroot juice.
Simeon Van der Molen, Founder of Moving Mountains, spoke with NutritionInsight: “The Moving Mountains B12 Burger has taken scientists, chefs and farmers over two years to make and is the closest replication to animal meat in the UK, but requires less land, less water and produces fewer greenhouse emissions. Throughout this process, one of the main challenges was competing with a regular burger on every level – taste, nutrition, minerals and satisfaction,” he explained.
The B12 burger is 100 percent raw plant meat, protein-rich and aims to mimic the look, smell and taste of regular meat. You can read the full story here.
The plant-based meat alternatives space is booming on a global scale. Last month, FoodIngredientsFirst spoke with Impossible Foods after the company made its international debut in Hong Kong following the success of the company's burger, The Impossible Burger, which is served in more than 1,400 outlets in the US – from award-winning restaurants to the fast-food chain, White Castle.
“Our Impossible Burger is the only plant-based burger that mimics the taste, feel and smell of a beef burger from a cow. Impossible Foods’ was founded to replace animals as food production technology, and our platform will enable us to understand and recreate all animal products – meat, dairy, and fish – using plants. The goal is to produce a full range of meats and dairy products for every cultural region in the world,” says Jessica Appelgren, Vice President of Communications at Impossible Foods. You can read the full story here.
By Elizabeth Green