You are in : All News > “No deal” Brexit could lead to severe food price hikes, warns BRC 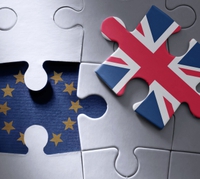 18 Sep 2017 --- As the clock ticks down to March 2019 when the UK officially leaves the European Union, the industry body representing the British retail industry has issued a stark warning that some food prices would seriously spike if negotiations aren’t handled correctly. In fact, more than three-quarters of the food imported onto UK shores from the EU will be subject to new tariffs – if the British government fails to reach an agreement on trade.

This means that the average cost of food imported by retailers from the EU would go up by 22 percent, according to new research carried out by the British Retail Consortium (BRC). Items like cheese, beef and fresh produce could be the worst affected.

Further analysis, based on the proportion of European food retailers sell and the impact of new tariffs demonstrates how much typical products could be affected. The impact will be considerable if UK producers react to higher import prices and push their prices up to align with foreign products.

Higher prices for everyday items
For consumers, new tariffs will mean higher prices. If Britain was to return to World Trade Organization (WTO) rules for trading with the EU, then food and drink exports imports would face significantly higher tariffs. And, the BRC has estimated potential price increases for a number of everyday food items, should goods from the EU face WTO tariffs.

The price of cheese, for instance, could rise by more than 30 percent, or for tomatoes nearly 20 percent. These calculations are based on import and sales data gathered from BRC members and tariff rate data from the International Trade Centre.

“Price increases of this scale to everyday food items will add a huge burden to hard-pressed consumers whose finances are already under increasing strain from inflationary pressures,” says Andrew Opie, Director of Food Policy at the British Retail Consortium.

“Even at the lower end of the risk, price rises of five to nine percent dwarf the increase from inflation that shoppers are currently paying on food goods. And the tariffs are particularly high on meat and dairy products, meaning that products such as beef and cheese would be hardest hit.”

“With consumers’ buying habits being dictated ever more by a shrinking pool of discretionary spend, there’s no doubt that they will find an additional hit of this magnitude to their weekly food bills extremely hard to swallow.”

“There will be opportunities from new trade deals in the medium to long-term, but there’s a pressing need to avoid a cliff-edge situation on Brexit day. This is why the priority for the UK Government has to be securing the continuity of free trade with Europe from March 2019 and thereby delivering a fair Brexit for consumers.”

This follows an earlier warning from BRC about the potential for mass UK food industry workforce shortages. In April, FoodIngredientsFirst reported how the BRC was among trade bodies in Britain’s food and drink supply chain warning that the continuation of a mass EU exodus of workers will damage the UK economy and cause serious disruption to the sector. You can read the full story here.

Almost one-third of UK food and drink businesses have had significant numbers of non-UK EU workers leave their roles since the referendum resulted in a call for Brexit last summer, according to the latest survey that involved more than 600 businesses.