You are in : All News > New product highs for hemp – the market potential 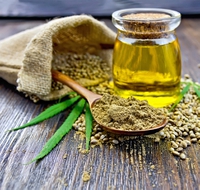 24 Jul 2017 --- With new product innovation surging, highly nutritious hemp in its various forms, is an ingredient on a health mission with widespread applications. According to research from Innova Market Insights, hemp claims have climbed up 42 percent CAGR for NPD (Global, 2011-2016).

Not only is hemp an excellent source of protein, rich in omega 6 and omega 3, essential fatty acids that have heart health and anti-inflammatory benefits. 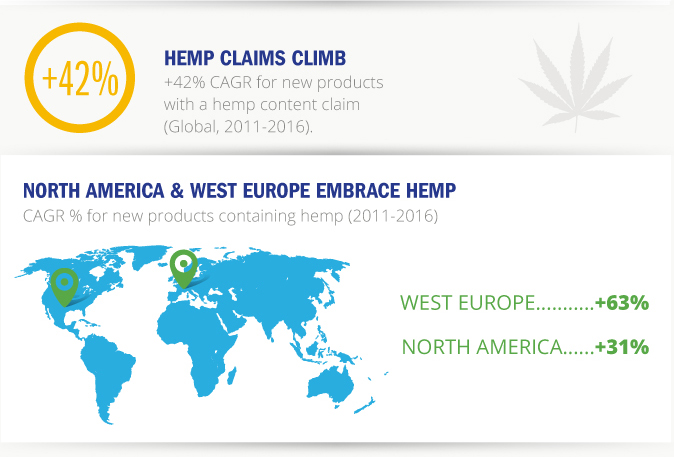 The application possibilities when using hemp as an ingredient are very wide. Hemp can be used in virtually any food and beverage application including snacks, smoothies, juices, infused waters, baked goods, nutritional bars, granolas and cookies. According to Innova Market Insights, cereals, sports nutrition and snacks are the key drivers behind hemp NPD. There has been a 76 percent growth in the bakery category for hemp applications (Global, 2016 vs. 2015).

According to The Hemp Industries Association (HIA), a non-profit trade association consisting of hundreds of hemp businesses, retail market research data for hemp food and body care products in the US is estimated at US$200 million in 2014.

Also known as an “ancient grain” or seed – hemp products are making NPD inroads and innovators in this space are keen to promote the benefits of using hemp in food products. Hemp seeds are the edible part of the hemp plant (Cannabis sativa L). They are small, round, and have a light nutty flavor. Hemp seeds can be added to salads, desserts, yogurts, cereals, and bread. They can also be pressed for oil, milled into protein powder, roasted or shelled and made into hemp foods.

Preet Marwaha, Executive VP of California-based PlanetHemp told FoodIngredientsFirst there are two key factors driving the interest in hemp: “The search for alternative plant protein to soy and the global exposure from medical cannabis.”

“The health and nutritional benefits are significant,” he explains, “It is the highest quality protein for the human body based on its structure of edestin and albumin protein, it is one of the best sources of omega 3 and 6 delivering it in an almost ideal ratio for our body and it is a great source of many key nutrients such as iron, magnesium and zinc.”

Where did the initial interest in hemp begin? “Many of the earlier uses were based on the fiber, hemp is known as one of the strongest natural fibers available. Ancient uses were yarn, cloth and paper while more modern use ranges from rope to textiles to canvas were made using hemp fiber. Ancient uses of the seed were right alongside grains such as barley, wheat, soy and rice,” notes Marwaha.

“Today we are seeing food as the primary use in the form of seed, protein powder, and oil. There are many companies like us that are pioneering new innovations in food and hemp is a standout competitor against many other ancient grains,” he claims. 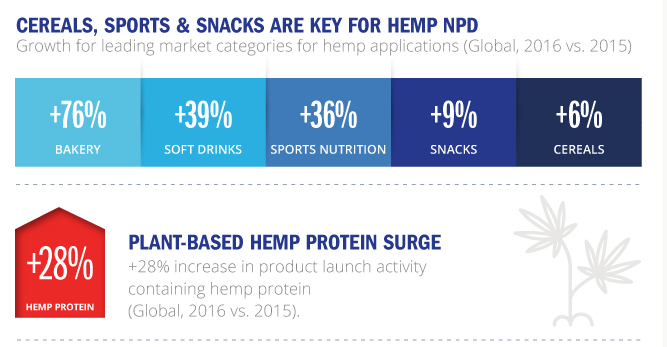 According to Margaret Gomes, Director of Marketing at NP Nutra, consumer demand for hemp has increased public awareness and research studies. “Hemp-based sales of products including functional foods and beverages, skin care products and others reached US$688 million in 2016, of which 19 percent or US$129 million were in food products. Customers are always looking for more plant-based protein options and hemp is very high on the list, considered one of the best (and complete) plant protein sources,” she tells FoodIngredientsFirst.

Although hemp in food and beverage has been compared to flax and chia for its nutritional benefits, hemp comes out as a winner with the most protein per serving. Hemp can be used in many products and does not need to be ground (like flax) or supplemented with lots of water (like chia) to derive nutritional benefits.

Last year, Braden Vernon at Hemp Foods Australia noted opportunities for hemp-based ingredients in Asian markets in particular. He said: “We are exporting to Japan and South Korea and we are seeing substantial growth and I think there is great potential for the rest of Asia too, also in terms of developing new finished products, such as muesli bars and cereals containing our nutritious seeds.” You can view the full video interview here.

Last week, NutritionInsight reported how a new study in animal tissue has shown chemical reactions that convert omega 3 fatty acids into cannabinoids that have anti-inflammatory benefits. Cannabinoids in marijuana and endocannabinoids produced in the body can support the body's immune system and therefore are attractive targets for the development of anti-inflammatory therapeutics. You can read the full story here.

For twenty years NP Nutra® has been supplying customers with the finest nutraceutical ingredients produced at our approved partner facilities around the world. Our ongoing commitment to purity, quality and reliability have earned the trust of a growing clientele, including the world's leading functional food and beverage, dietary supplement, cosmetic and pet food manufacturers who have become loyal customers through the years.

“At NP Nutra® we are passionate about health and that is one of the keys to our success. We research, source and supply only the purest, most potent ingredients available on the market, validated through our own Triple-T Verification Program. We care about every aspect of the business, from the workers who help grow the ingredients, the businesses who buy our products, to the consumers who are seeking better health.” —Thomas Walton, Founder Nature's Power Nutraceuticals Corp. (NP Nutra).