You are in : All News > “Mining the egg proteome”: The EVERY Co showcases macaron made with chickenless proprietary egg white

“Mining the egg proteome”: The EVERY Co showcases macaron made with chickenless proprietary egg white 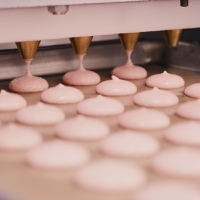 24 Mar 2022 --- The EVERY Co has used the iconic macaron to celebrate the launch of an animal-free egg white with the functionality of egg whites called EVERY EggWhite. Chicken eggs were not used to develop the egg white.

The egg white is the third product launched from the company’s platform in the last 18 months, made using precision fermentation in brewing its animal protein.

The move stretches the company’s ingredient portfolio by leveraging a US$175 million cash injection received in 2021 to drive commercialization.

The San Francisco-based company partnered with Chantal Guillon, designer of the “French macaron of the West Coast.”

The Chantal Guillon specialty macarons featured ingredient showcases the functionality of egg whites without the need for a factory farm. EVERY EggWhite whips and gels like a chicken-derived egg white to provide the same height, foam stability, aeration and texture. It can be used in applications ranging from cakes, cookies and breads to protein bars, plant-based meats and pasta.

“Our proteins are real, nature-equivalent animal proteins; not plant-based or cell-based, made without using a single animal. The proteins match the taste, texture, and unique culinary functionality of real eggs,” he says.

From inception to masterful macaron
Since its inception in 2014, EVERY, formerly Clara Foods, has advocated for advancing food technology by developing animal protein without using individual animals, beginning with animal-free pepsin, an animal-free soluble egg protein, EVERY ClearEgg, followed by EVERY EggWhite, its current flagship product.

“We will also continue to expand its protein production platform by mining the egg proteome for novel, hyper-functional proteins,” Elizondo explains.

The company will continue growing its product platform making ingredients solutions used in the foodservice and consumer packaged goods applications.

The proteins will be sold globally by Ingredion. EVERY has partnered with ZX Venture’s BioBrew, the global investment and innovation group of AB InBev, to brew its animal-free proteins at scale.

“While precision fermentation has been around for decades, creating new animal-free proteins via this method does not happen overnight. Each new protein we create requires a great deal of dedication and investment in R&D,” Elizondo continues.

Mentored by chefs Alain Ducasse and Marc Ehrler, pastry chef Patrick Lassaque joined the culinary arts as a boy in France. For more than 30 years he and his wife, Lubna, have baked macarons highlighting French opulence and Californian innovation.

“Our mission is to push boundaries and bring the best ingredients and techniques to the macaron, the iconic French pastry,” says Lassaque, co-owner of Chantal Guillon.

The egg white is suitable for vegans, but it is unsuitable for people with egg allergies due to its game-changing nature-equivalent formulation.

By Inga de Jong with additional reporting by Benjamin Ferrer

The Every Co. EVERY EggWhite Macarons Bakery Animal-Free

Created for bakery mixes and seasonings, GNT has extended its range of green EXBERRY Coloring Foods made from turmeric and spirulina.

In Kerry’s review of its third quarter results, the company underscores that consumer demand continued to be strong through the period despite geopolitical... Read More

This week in industry news, Standing Ovation closed a €12 million (US$11.9 million) series A financing round to accelerate the development of its animal-free casein... Read More