You are in : All News > Meelunie tackles protein transition with “breakthrough” fava tech from Danish university 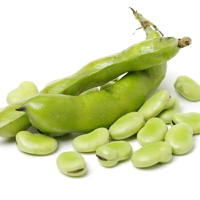 31 May 2021 --- Meelunie, a global supplier of starches and plant-based proteins, will open a new fava protein isolate manufacturing facility in Hedensted, Denmark in October 2022.

The company believes fava will play a pivotal role in the protein transition, helping meet the growing demand for plant-based proteins in ways that also address tackling deforestation, inefficiencies in global agriculture and other climate-related challenges.

Eating for the planet
Meelunie CEO Marco Heering says he sees the processing facility as a significant step forward. “The limited availability and suitability of local alternatives to soy has been a handbrake on the protein transition for some years. Because the fava bean thrives in non-tropical climates, such as Europe and North America, this facility can be a genuine gamechanger.”

The facility will be located near land ideally suited to cultivating fava beans and will produce high-quality fava ingredients. The factory design is also climate-friendly.

“Water used in the production process will be filtered and reused to create a circular system,” says Van Elst, “and we’ll capture heat generated in production for reuse in the local municipality’s heating system.”

Meelunie’s processing facility will use technology that removes the bitter taste of fava beans for plant-based applications.Positive processing
The facility will be equipped with processing technology from SiccaDania, and employ a “breakthrough” process methodology developed by the University of Copenhagen (UCPH) following 17 years’ research.

“First, they’ve managed to remove the fava bean’s bitter taste, making it perfect for use in human food applications ranging from dairy and meat alternatives to sports nutrition and gluten-free products. And UCPH’s process is also more efficient, so we’re able to valorize the entire bean.”

Using “wet fractionation,” the researchers succeeded in concentrating fava bean protein and removing substances that would otherwise inhibit the digestion of the protein. This allowed nutritious fava bean proteins to be more readily absorbed when consumed.

Fava: a new contender
This month, Nestlé-owned Sweet Earth Foods updated its Sweet Earth Awesome Burger 2.0 to be the first plant-based burger on the market to use a mix of pea and fava in addition to hemp protein as its base.