11 Jul 2018 --- A new batch of carotenoid-derived colors from Lycored have proved to be “super-stable” in hard coated candy and vitamin-enriched gummies. Research has shown that the use of natural colors does not diminish the appeal of candy to children and actually enhances it for parents. This is according to Lycored’s team which will be presenting its findings on natural colors during the IFT Food Expo in Chicago next week.

Lycored’s Tomat-O-Red TM (pinks to reds) is sourced from lycopene from tomatoes, while Lyc-O-Beta TM (yellows and oranges) is extracted from beta-carotene.

Initially, tests were carried out to check the performance of these carotenoid-derived colors in vitamin-enriched gummies. This included accelerated and real-time shelf-life stability on gummies colored with six different Lycored shades. They were compared with samples produced by the same manufacturer but colored artificially.

The Lycored-colored gummies contained vitamin C, but the artificially colored alternatives did not. 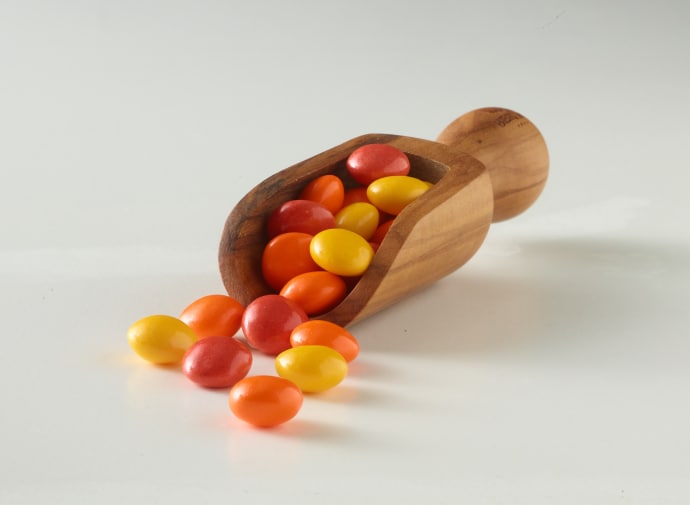 The natural colors from Lycored all remained true to fruit in their natural color hues and their stability was strong under intense light conditions, according to the company, and similar to that of the synthetic colors. This was the case despite the additional stress of vitamin C content, which disrupts the stability of some colorants.

Lycored also looked into the performance of its carotenoid-derived colors during the rigorous hard-coating, panning process in hard-coated confectionery. The solutions were tested in two different coatings for candy – Quick White from Norevo and titanium dioxide.

The formulations, in shades of red, yellow and orange, were tested for four weeks at temperatures of 20°C, 25°C, 30°C, and 35°C in clear plastic bags and in a humidity-controlled environment.

The investigation showed that all colors performed very well with good quality shades in both coatings.

Christof Ruttgers, Confectionery Technologist at D&F Drouven, who carried out the research, remarks on their user-friendliness compared to other color sources.

“Water-soluble reds can be challenging to work within confectionery as they often become white or dusty when sugar crystals form,” he says. “This is the case with synthetics and maltodextrin-based colors, as well as vegetable, concentrates such as beets.”

“However the Lycored colors we tested are oil-based, which makes them much more resilient.”

Childrens’ reaction to natural colors
Lycored’s consumer research also revealed that natural colors are not a deal-breaker for children. The company wanted to get some insights into how children and their parents perceive color in candies.

Interviews with ten children and their parents were conducted with each pair being sent a bag of gummies colored naturally with Tomat-O-Red and Lyc-O-Beta and another made by the same manufacturer but colored artificially.

Both the children and their parents were able to distinguish between the naturally colored candies and the artificial ones. However, although the children tended to prefer the brighter, artificial colors, they were enthusiastic about eating all of them, says Lycored.

The parents said that ideally, they would prefer to feed their kids healthy options and if all other factors, such as taste, were similar they would buy candy-colored naturally. Some said they would be willing to pay more for naturally colored versions of candy they already buy.

“For kids, candy is candy and taste is king. They might notice that artificially colored products look brighter, but color definitely isn’t a deal-breaker. And when their parents realize that naturally colored products taste exactly the same, factors like clean label and naturality come back into play,” says Christiane Lippert, Head of Marketing, Food, at Lycored.

“Meanwhile, we’re delighted that two more stability trials have demonstrated the high performance of our natural colors in yet another category,” she concludes.

Ambienta has revealed that its platform company Nactarome, a key European player in the European markets for food colors, flavors and ingredients, continues its growth... Read More

Dazzling bright white chocolate destined to be a big hit on Instagram is the new brainchild of Cargill, drawing inspiration from the adage that “you eat with your... Read More