You are in : All News > Livestock sector hits back: Plant Based Treaty launches amid vegan protests at Arla factory 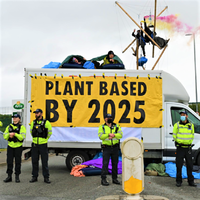 01 Sep 2021 --- Europe’s livestock sector has hit back at a rising tide of vegan activism, which has spurred the launch of the international Plant Based Treaty and a protest blockade of Arla’s key milk factory in England that took place yesterday. Climate activists are demanding that the Danish multinational food conglomerate – churning out an annual turnover of around €10 billion (US$11.8 billion) – goes fully plant-based by 2025.

Animal Rebellion blockades Arla facility
Around 50 activists from Animal Rebellion, a sister group to Extinction Rebellion, stood in protest blocking the gates to the Arla’s distribution center near Aylesbury, UK, erecting bamboo structures and concrete barricades to prevent trucks from entering the facility.

“We have managed to complete our morning shift changeover and all colleagues are safe, however, access to the site for our larger vehicles is being blocked. We are working to manage the impact of this,” an Arla spokesperson tells FoodIngredientsFirst.

Photos circulated by the group showed activists chained together beneath a van with a banner stretched across one side reading “Plant-based by 2025.” 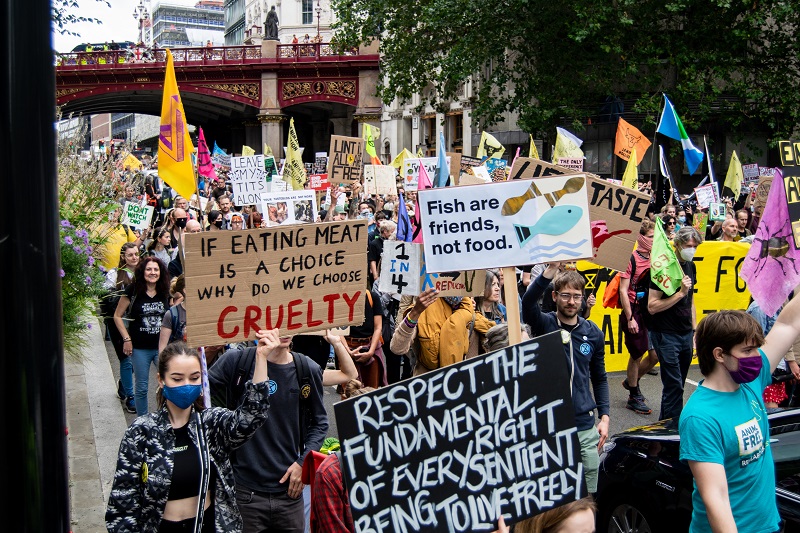 Momentum across the plant-based movement continues to gather pace. (Credit: Animal Rebellion)“Arla is one of the biggest producers of dairy in the world meaning that they have a responsibility to the public and their workers to transition to a plant-based system now before it is too late,” an Animal Rebellion spokesperson tells FoodIngredientsFirst.

“As extreme weather events increase, the dairy industry will simply become unviable in the very near future as crop shortages and intolerable heat mean that raising the cows needed to fuel the demand for milk will become impossible. We can replace dairy products with an abundance of plant-based alternatives,” they stress.

“Major companies and the government need to defund meat and dairy and fund a just transition to sustainable plant-based milk.”

In response, the Arla spokesperson stresses: “As a cooperative owned by farmers we are committed to producing dairy for the UK in the most sustainable way possible. We already make raw milk with around half the average emissions of dairy globally and intend to be carbon net zero by 2050.”

“We are working with the police to limit the impact of this demonstration to both our customers and those living locally to the site.”

Multi-city demonstrations
On the same day as the Arla factory protests, pro-vegan demonstrations took place outside nearly 1,000 town and city halls to champion the newly spearheaded global Plant Based Treaty, which aims to hasten “bottom-up pressure” for leaders to negotiate an international agreement to halt the impact of animal agriculture on the planet.

The Plant Based Treaty campaign aims to secure the endorsement of 10 million individuals, 10,000 organizations, 10,000 businesses and 50 cities by 2023, ahead of the Global Stocktake of the Paris Agreement (GST).

Blockade at the Arla facility near Aylesbury, UK. (Credit: Animal Rebellion)“The sixth Intergovernmental Panel on Climate Change (IPCC) agreement makes it clear that it is more critical than ever to reduce greenhouse gas emissions and identifies plant-based diets as a key method of achieving this,” asserts Anita Krajnc, global campaign coordinator for the Plant Based Treaty.

“With our global temperature set to rise by 3°C unless we take urgent action, it is now imperative that we drive awareness of how our food systems – and animal agriculture in particular – are contributing towards the climate crisis.”

European dairy sector hits back
Speaking to FoodIngredientsFirst, Alexander Anton, secretary general for the European Dairy Association (EDA), argues that the dairy industry has been taking a “pro-active journey” toward environmental stewardship.

“For all I know, our colleagues from the meat sector are fully committed here, too,” he adds.

“The Plant Based Treaty takes a massive retro approach by banning all investments for a modern, climate friendly livestock sector. I regret this approach chosen by the Treaty and its many counter-productive ‘measures.’”

Over the last year, Europe’s dairy and milk alternatives players have been embroiled in a long-running debate over plant-based dairy alternatives branding.

“Going forward, I would imagine the best compromise will be “less meat consumed, but higher quality,” remarks Alice O’Donovan, legal and policy advisor at Eucolait.

“Moreover, rising populations in the developing world and increased affluence means that the bulk of meat consumption in the future may be centered elsewhere than Europe, for example.”

By Benjamin Ferrer, with additional reporting from Elizabeth Green