You are in : All News > Bugs on the menu? EU food safety watchdog approves yellow mealworms as safe for consumption 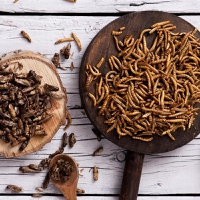 14 Jan 2021 --- Yellow mealworms (Tenebrio molitor) have crossed a significant regulatory hurdle as Europe’s first insect to be identified as safe for consumption, which may hasten similar progress for other species and their related product applications. This follows a positive safety assessment by the European Food Safety Authority (ESFA) of an application from Agronutris, a French insect-based protein producer.

Ultimately, it will be EU policymakers in Brussels and capitals who determine if insects should be authorized for the European dinner plate.

“This green light from the Parma-based agency [Italy] is important not only because it is the first novel food opinion on edible insects – but also because it will pave the way for other applications that are in the pipeline,” Constantin Muraru, communication and research manager at the International Platform of Insects for Food and Feed (IPIFF), tells FoodIngredientsFirst.

Bugs as a sustainable food source
As of this month, over 20 applications have been submitted for the authorization of insects as a novel food.

“The reason behind having a higher number of applications – in contrast to the number of species – is because each case is focused on particular food applications. For instance, the applicant has to specify the various uses of the insect covered by the application.”

Tenebrio molitor farm (Credit: Agronutris). In the near future, it is predicted that the weakening stigma surrounding edible bugs will lead to the popularized snacks, biscuits, finger foods, pasta and burgers made with the highly nutritious novel food source.

An abundance of novel food
Since January 1, 2018, EFSA has received 156 Novel Food applications. This comprises 63 in 2018, 48 in 2019 and 45 in 2020. At present, 81 are under risk assessment. These include herbal products derived from plants, algae-based foods, and non-indigenous fruits in addition to an array of edible insect varieties.

All novel food applications are first sent to the European Commission, who processes them, and then once deemed valid they undergo a risk assessment by EFSA.

“The EFSA has nine months to carry out this risk assessment although the clock may be stopped at any time if follow-up information or data is required from the applicant,” a spokesperson of the organization tells FoodIngredientsFirst.

“Novel food applications are so varied that we need many types of scientific expertise to assess them [against various benchmarks] – nutrition, toxicology, chemistry and microbiology to name a few.

Delving into the nutritional properties of insects
Various insect-derived foodstuffs are often heralded as a source of all essential amino acids for the diet.

“As confirmed by EFSA, the content of all individual amino acids is higher than those of the foods used for comparison (barley, fish, brewer’s yeast, beef/veal, crustaceans) except for lysine, which is slightly higher in brewer’s yeast,” explains Muraru.

Ermolaos Ververis, a chemist and food scientist at EFSA, coordinated the first adopted opinion on insects as novel food, which bolstered this understanding.

“Formulations from insects may be high in protein, although the true protein levels can be overestimated when the substance chitin, a major component of insects’ exoskeleton, is present,” he explains.

“Critically, many food allergies are linked to proteins so we assess whether the consumption of insects could trigger any allergic reactions. These can be caused by an individual’s sensitivity to insect proteins, cross-reactivity with other allergens or residual allergens from insect feed, such as gluten.”

There are additional non-scientific reasons why the novel food work is challenging.

“The flood of applications is a significant workload and meeting the deadline for assessments is sometimes tight, particularly if applications miss essential scientific data,” highlights Dr. Helle Knutsen, molecular biologist and toxicologist, under the EFSA expert panel on nutrition.

“But, the collaboration between the experts is stimulating and it is rewarding to know that we are contributing to keeping our food safe.”

Beyond assessing the scientific risks
The novelty of using insects in food has led to high interest from the public and the media, so EFSA’s scientific assessments are essential for the policymakers who will decide whether or not to authorize these products before they can be put on the EU market.

Giovanni Sogari, a social and consumer researcher at the University of Parma, remarks: “There are cognitive reasons derived from our social and cultural experiences, the so-called ‘yuck factor,’ that make the thought of eating insects repellent to many Europeans. With time and exposure such attitudes can change.”

“There are clear environmental and economic benefits if you substitute traditional sources of animal proteins with those that require less feed, produce less waste and result in fewer greenhouse gas emissions,” stresses Mario Mazzocchi, an economic statistician and professor at the University of Bologna.

“Lower costs and prices could enhance food security and new demand will open economic opportunities too, but these could also affect existing sectors.”

In recent developments, the European ValuSect consortium kickstarted a program to help firms accelerate the development of insect-based foods in Europe. Under the program, small and medium-sized enterprises were invited to apply for vouchers worth up to €40,000 (US$48,700) in services.

Incorporating edible insects into diet: What does the future hold for mealworm and cricket-based food?

Mealworms and crickets are edging closer to EU plates following the latest round of approvals, as commercialization of alternative products containing protein-packed... Read More

The European Food Safety Authority (EFSA) is gathering feedback from academics and the general public on the evaluation of nitrites and nitrosamines in food and the... Read More