You are in : All News > Going green: Arla Foods aims for net-zero carbon dairy by 2050 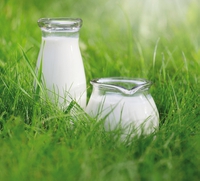 11 Mar 2019 --- Europe’s largest dairy cooperative, Arla Foods, has pledged to operate globally from a carbon net zero standpoint by 2050. These goals will be “entirely offset by improvements elsewhere in the supply chain and be even more closely aligned with nature to increase biodiversity further,” the company writes.

These new targets come after the cooperative, owned by 10,300 farmers in Britain, Germany, Denmark, Sweden, Finland, the Netherlands and Belgium, shows business growth can be achieved without significant environmental impact. While Arla Foods has managed to annually produce more than 40 percent more milk since 2005 output levels, its CO2 emissions have reduced by 22 percent across production and packaging and its on farms' CO2 emissions per kilo of milk have decreased by 24 percent since 1990.

Livestock farming alone is responsible for up to 18 percent of the greenhouse gases that contribute to global warming, according to the United Nations (UN). People need to change the way they use energy to eat, travel and live, for example by reducing their meat and dairy consumption, driving electric vehicles or taking public transport, and buying low-carbon products, according to the UN.

“One of the greatest challenges facing us all is providing natural, nutritious food for a growing population while reducing our collective impact on the world around us. Arla has already shown this is possible and the new ambitions will ensure Arla’s farmers, production sites and products continue to play their part in developing a sustainable world for everyone,” Arla Foods UK Managing Director, Ash Amirahmadi explains.

David Christensen, an Arla Foods UK Farmer, based in Oxfordshire, tells FoodIngredientsFirst: “The biggest challenge is the cow herself, the way her stomach works and releases methane and other gases. For us, that is the part which is hardest to alter. We can make sure our cows are healthy, make sure they are at their most efficient and we can also look at new ways of feeding which could reduce methane and other gases.”

According to Christensen, these initiatives are not only about what consumers want, but the entire population as a whole. “We all want to play our part in ensuring long term survival of the plant – consumers, the public and as importantly what we, as farmers want to do to help. There is stewardship in running your own farm – and that extends to the broader environment as well,” he says. “Many people are driving why we should set these targets – not just the consumers alone.”

“We've come a long way already, but there is still a lot that can be done. The key thing is being cost-effective and profitable at the same time,” Christensen notes. “This is often about efficiency; the more efficient you are, the more sustained your business will be.”

“So that’s as good a driver for these actions as anything else,” he claims.

“We want customers to still enjoy dairy without worrying about its footprint and effect on the planet – as a dairy farmer that is very important to me,” Christensen continues. “It's not just about consumers, they are essential to this, but I also want a clear conscience in what I'm doing – in doing the right thing for the planet,” he says.

While the targets are ambitious and will require radical changes across its business in the decades to come, Arla Foods believes they are possible as a result of the rapid pace of change in technology and ever-increasing on-farm efficiencies.

According to the company, Arla’s UK examples of best practice have already proven this:

Examples of actions taken by Arla’s UK farmer-owners to drive sustainable change include:

Arla Foods farmer owner Arthur Fearnall explains: “Every day Arla farmers take steps to support and shape Britain’s countryside. No one feels the effects of varying weather patterns more than farmers, and it has a direct impact on the animals we care for, the food we produce and the money we make.”

“We’ve taken some big steps at Arla Foods, but we can’t take our feet off the pedal. Every business and individual in every walk of life will need to think about their impact on the world in the years to come,” he concludes.

UK retailers are demanding more time and clarity before the government’s laws to restrict where they can sell foods deemed high in fat, salt or sugar (HFSS) in... Read More