04 Jan 2021 --- The brains behind the Veganuary movement and vegan investment fund Veg Capital has now turned his attention to selling vegan fried chick*n, with the aim of “putting factory farms out of business.”

Matthew Glover, a UK businessman, has launched a vegan fried chick*n company, VFC. He is hoping to roll out VFC products in the US by the end of this year.

Glover co-founded Veganuary with his wife Jane Land in 2014. Veganuary is a UK nonprofit organization that promotes and educates about veganism by encouraging people to follow a vegan lifestyle for the month of January.

Now, with the campaign going global and his investment fund having helped launch several vegan food companies, including THIS and The Mighty Pea, Glover is hoping to help “the biggest victims of the factory farming system” – chickens.

“I’m a businessman turned activist,” explains Glover. “And VFC is very much a marriage of the two. There are many ways to dismantle unjust systems, and we intend VFC to be part of the movement that puts an end to factory farming for good.” 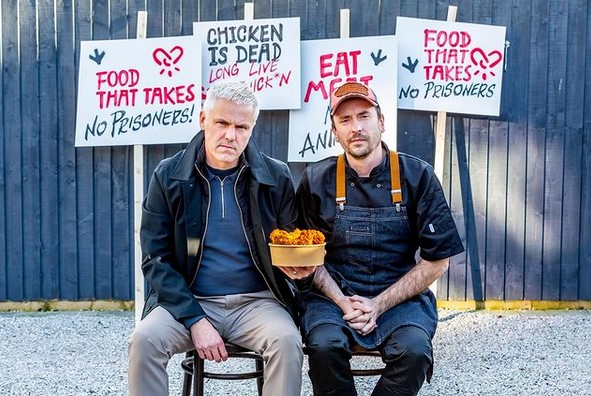 “This is where food meets activism. This is our sit-down protest,” says Matthew Glover, co-founder of VFC (pictured left).Speaking to FoodIngredientsFirst, Glover says there is absolutely no doubt that the plant-based movement will keep growing.

“The environmental evidence of the impact of animal agriculture gets stronger and more worrying by the day. This is driving institutions, retailers and individuals to make changes – either reducing the amount of meat in dishes or removing it altogether.”

“The opportunities for creating new vegan products are significant but with so many more products coming to market, people are, quite rightly, being choosier,” he explains.

It’s not enough to tick a box, you have to provide fantastic, flavor-stacked foods that will entice even those who have never thought about eating plant-based meats.”

The restaurant experience
Together with UK chef and restaurateur Adam Lyons, Glover has launched VFC.

At his restaurant in York, England, called Source, Lyons will serve vegan meals alongside meat, fish and vegetarian options.

“Among the vegan meals on offer was the best vegan fried chick*n I had ever tasted,” claims Glover. He thought that if people just tried it, “customers would realize that factory farming and slaughter were not needed to get the taste and texture of meat.”

Lyons took part in Veganuary, and then, with the idea of VFC taking shape, Glover took the chef inside a typical industrial chicken farm.

“Adam had never thought too closely about how chickens were reared before then and that visit was a game-changer for him. He went in as a fledgling vegan and came out 100 percent committed to getting VFC into the mainstream market,” explains Glover.

Glover expects to appeal to vegans and Veganuary participants initially, “but they are not really our target,” he says.

“Our ultimate aim is to reach flexitarians and omnivores. If they try VFC they’ll see they can have the flavor, taste and texture they love without the factory farming and slaughter, and that is what VFC is all about: providing great-tasting food without the downsides,” Glover maintains.

Supporting veganism without “finger wagging”The ultimate aim is to reach flexitarians and omnivores, says Glover.
According to Glover, there is a “rich seam of activism” running through VFC’s branding.

The packaging features stylized graffiti and campaign messaging while the website hosts the men’s filmed visit to the chicken farm.

The company’s strategy draws on the history of social justice movements, but “there is no finger-wagging here,” Glover says. “At the heart of the company lies positivity and wit, and delicious, feel-good food.”

Glover and Lyons hired brand design consultancy Elmwood – the team behind Wicked Kitchen, the highly successful brand sold through Tesco – and are ready to launch VFC with fanfare.

Scaling plant-based options
VFC will be available only online. Glover and Lyons have appointed a sales director with the aim of getting the products to retailers as quickly as possible. Achieving price parity with animal-based chicken is another key priority, but they aim to make it cheaper eventually.

“VFC is our first offering but we absolutely plan to expand the range in time, and we’ll continue to focus on products that will help the greatest number of animals,” Glover notes. “But our short-term aim is to get VFC onto the high street, and then launched in other countries. We expect to be in the US by the end of the year,” he asserts.

“We’re not messing about,” says Lyons. “We’ve developed a product that looks, cooks and tastes like chicken, and we are ready to play our part in emptying those factory farm sheds. That’s what drives us on.”

The products available from VFC are:

VFC is made from wheat protein and is soy- and nut-free. It looks, tastes and pulls apart like chicken but is 100 percent plant-based. It is “made for carnivores and suitable for vegans,” the company notes.

The plant-based movement is expected to grow even further in the next 12 months, with key players tapping into consumers' demands. In line with Innova Market Insights’ “Plant-Forward” trend, the ever-evolving plant-based definition expands vegetarian and vegan NPD into the mainstream.

Its rising mainstream appeal will drive expansion to different regions and categories in 2021, including accelerated demand for new formats, plant proteins and more sophisticated alternatives.