You are in : All News > Food for thought: Dole’s malnutrition campaign features edible fruit-based ink posters

05 Oct 2022 --- The Dole Sunshine Company (DSC) is launching Malnutrition Labels: Nutritional Ink, a campaign that uses fruit-based ink to print advertisements to draw attention to the low nutritional content of some of the UK’s favorite snacks and on-the-go food options.

The company has released a debut film displaying posters made with ink that have more nutritional content than many of the foods eaten every day across the world, including fast food, candy and chips. These posters, distributed around London city, UK, aim to highlight the campaign’s approach to communication and consumer education.

Supporting the claim that a majority of Brits seem to opt for snacks with low nutritional content, Innova Market Insights shows that there have been 983 snack launches in the UK in 2022 so far, out of which a mere 7% are fruit-based snacks and less than 1% are vegetable-based. Contrastingly, the majority of snacks (22%) are potato-based, such as chips.

“This campaign is about building consumer advocacy for access to more healthy food options that provide the necessary nutrients for a healthy and sustainable lifestyle,” says Pier Luigi Sigismondi, president of DSC Packaged Food & Beverages Group.

Allies for aliment
To develop this line of printing inks, DSC collaborated with authorities in multi-sensory experience design of which Bompas & Parr, based in London, and St. Luke’s Communications stand primary.

DSC has released a debut film displaying posters made with ink that have more nutritional content than popular snacks.Speaking on the development challenges, Bompas & Parr Studio explains that the creative research and development process in creating ink like this “has been a fascinating one.”

“From carefully balancing the ingredients to create vibrant colors, to modifying the textures to ensure they were compatible with screen printing techniques, we managed to show that a traditional chemical-based process can be reproduced in a sustainable plant-based way, with actual nutritional value, as well.”

Food scientists oversaw the testing, which involved several iterations of experiments utilizing a variety of fruit waste and scraps, from grapefruit to pineapples, to get the best colors and nutritional composition for printing.

The integrated campaign will use digital, social and out-of-home components.

“Nutrition and wellness are core to our portfolio transformation at the DSC. Too often we see consumers making poor choices, but the responsibility needs to shift to industry and government to ensure access to proper nutrition,” says Sigismond.

“Nutritional Ink is designed to spark thought-provoking conversations and hopefully, inspire actions that drive the systemic change that our food system so desperately needs. A small amount of distilled fruit may contain more good nutrients than some popular snacks.”

A UK-based charity battling food waste and hunger, FareShare, received donations from DSC as part of the campaign. FareShare will distribute the funds to its network of approximately 9,500 charities and community organizations throughout the UK. 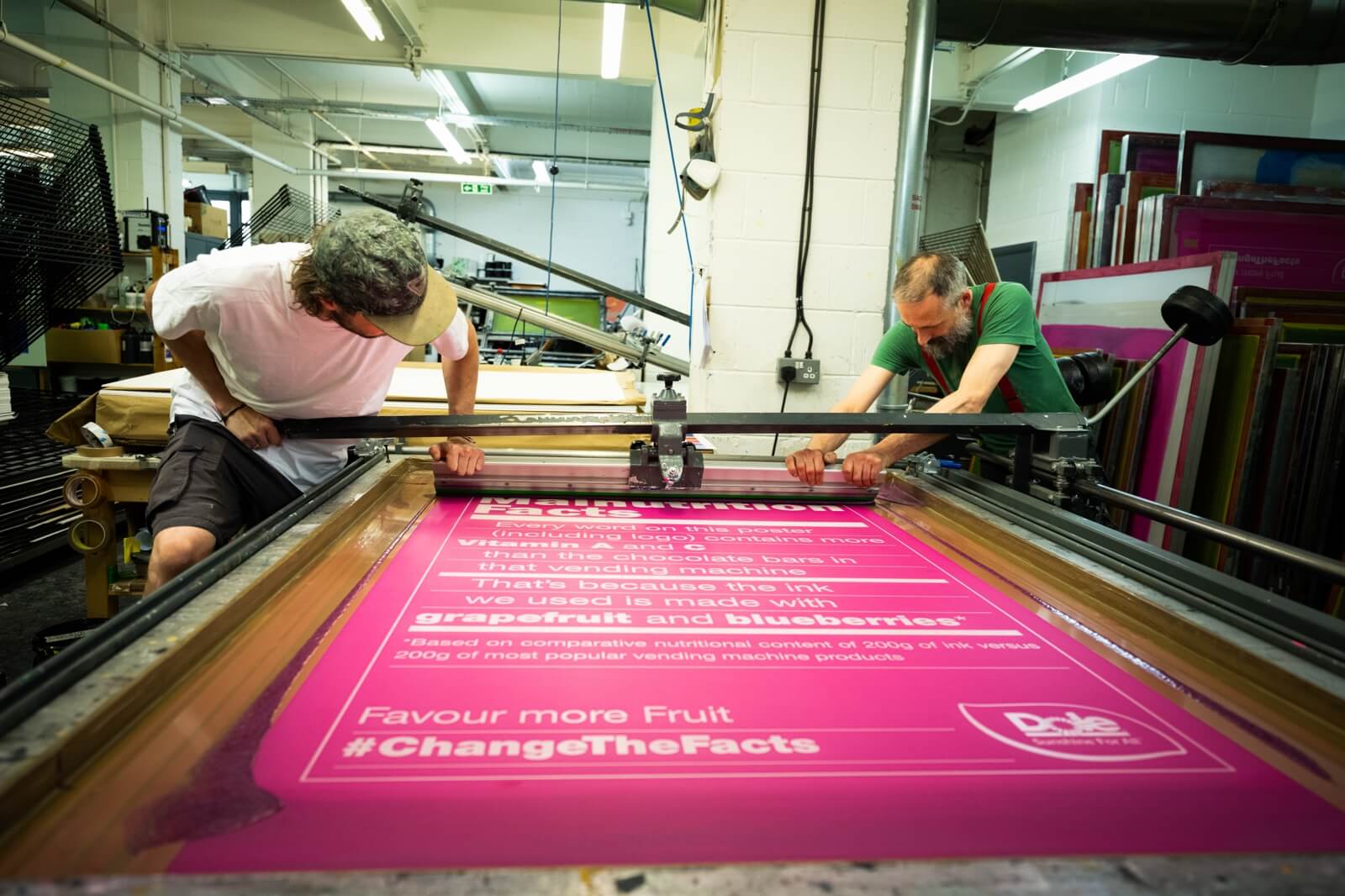 Researchers had to modify the ink textures to ensure they were compatible with screen printing techniques.

International awareness
DSC’s Malnutrition Labels were initially released as part of a series of large-scale projects.

The campaign made appearances on big belly smart waste and recycling bins, trash bags, and waste removal trucks in New York City, US, helping to change the waste symbol into a useful tool encouraging food waste reduction and combating poverty internationally as well.

With a series of hashtags, DSC aims to encourage people to #FavourMoreFruit while choosing healthier snacks and to take action to #ChangetheFacts about malnutrition.

Recently, a study by the Food Foundation revealed that the rates of undernutrition are increasing across the UK. The publication shows that the UK’s food system has evolved in such a way that unsustainable and unhealthy foods are the norm and it carefully highlights that lower-income families suffer more. This trend has caused an increase in obesity.