You are in : All News > Fat reduction in the spotlight – the race against trans fat

Fat reduction in the spotlight – the race against trans fat 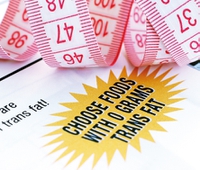 21 Aug 2017 --- Many food manufacturers would say that the top priorities for the food industry are salt, sugar and fat reduction. For many years now the unrelenting advice has been to cut out the so-called “bad” saturated fats, which, in turn, has had an impact on many categories across the food industry.

The issue of fat and fat content has been widely criticized for decades, leading to major changes in regulations relating to trans fat such as the complete removal of processed foods. As the upcoming June 18, 2018, date looms, when manufacturers must ensure their products no longer contain partially hydrogenated oils (PHOs) for uses that have not been otherwise authorized by FDA.

PHOs are the major source of artificial trans fat in the food supply. They are the most often used source of fat in commercial baked goods because they don’t spoil as quickly as other fats and have a longer shelf-life. Artificial trans fat can be found in many of the same foods as saturated fat, such as baked goods, fried foods, frozen foods, snacks and various types of margarine.

Overconsumption of trans fat raises the level of LDL (bad) cholesterol in the blood. An elevated LDL cholesterol level in the blood increases your risk of developing heart disease, the leading cause of death in men and women in the US. Removing PHOs from processed foods could prevent thousands of heart attacks and deaths each year.

As is often the case in the food industry, opinion surrounding certain ingredients can be conflicting. A recent example of this is coconut oil, which some claim boosts metabolism, the immune system and promotes a healthy heart. Coconut oil is high in natural saturated fats. Saturated fats not only increase the healthy cholesterol (HDL cholesterol) in the body but also help convert the LDL “bad” cholesterol into good cholesterols. Around 91 percent of the fat in coconut oil is healthy saturated fat.

The move followed an opinion from the European Food Safety Authority (EFSA) stating that contaminants created when palm oil is refined are carcinogenic.

An EFSA study found that for everyone except babies, the main exposure comes from, pastries, cakes and margarine. Many brands of chocolate also contain refined palm oil.

Advice from public health bodies is still vague. The UK's Food Standards Agency (FSA) said that it was working with European partners to agree on suitable regulation, in light of the EFSA's findings. “We advise that consumers eat a healthy, balanced and varied diet to balance the risk,” an FSA spokesperson said.

Nestlé, who makes a number of products with refined palm oil, said the company takes the issue seriously and has funded scientific research into how the cancer-causing compounds form.

The US-based consumer lobby group Center for Science in the Public Interest (CSPI) claims that since palm oil is high in saturated fat and low in polyunsaturated fat it, it could promote heart diseases. However, CSPI classes palm oil as better than PHOs, but more harmful than liquid oils such as olive and canola.

Specialty oils and fats developer IOI Loders Croklaan markets its range of bakery applications with the message “Go No PHO” and positions itself as experts in offering bakery solutions from cookies to coatings, and pizza to pie, that help customers produce PHO-free baked goods without compromising on taste.

At IFT 2017, Loders Croklaan presented various applications of their Sanstrans ingredient, including a new puff pastry product with their Sanstrans Roll Rite Puff, which is free from trans fat. Speaking with FoodIngredientsFirst, Harold Kaizer of IOI Loders Croklaan says: “The trend has been towards the removal of trans fat, which will occur in June 2018. What we have done is converted much of our portfolio line to trans free shortenings. We deliver shortenings for different functionality and applications; whether bakery or confectionery.” Sanstrans Roll Rite Puff has been created to replace partially hydrogenated vegetable oils in this application. He noted that some of the challenges include that you need to create a product that has good flexibility, good machinability within the process. “Puff pastry is an application where you use the shortening to laminate the dough layers and the lamination shortening has to be spread thinly, so that you get the flaky appearance. It has to give you the consistency, so that you can build these layers and it gives you good height. These products are not waxy and don’t have a lot of palate cling,” he adds.

You can read the second part of this report here.

Bunge Loders Croklaan is a leading global producer and supplier of sustainable plant-based specialty oils and fats for the food manufacturing industry. It operates as the global B2B edible oils business of Bunge Limited (NYSE:BG). Its products are used in a wide range of applications, from bakery and confectionery to culinary and infant nutrition. With in-depth knowledge of ingredients, applications and processes, the Bunge Loders Croklaan team closely cooperates with customers to develop tailored solutions and create innovative products to meet their business goals and differentiate them in in the marketplace.