You are in : All News > Exploring a “meat-like” flavor from mealworms, scientists trial larvae cooking 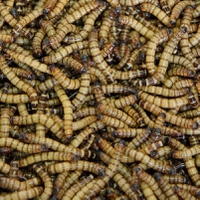 25 Aug 2022 --- Scientists have recently discovered that mealworms can be transformed into a “meat-like” flavoring that could aid in searching for more sustainable meat sources.

With the addition of heat, sugar and some consumer opinions, the team created a “meat-like” taste from the mealworms. The researchers from Wonkwang University in South Korea studied the mealworms throughout their life stages to build knowledge of their flavor potential to understand how the insects can make the best ingredient.

To create a “favorable” flavor from the mealworm, the researchers cooked the larvae in different methods and observed how this affected the flavor `profile. For example, roasted and deep-fried versions of mealworms had shrimp-like and fried oil-like attributes.

“Commercially speaking, they can be found as whole boiled, fried or dried, whole processed into a granular powder or paste incorporated into diverse food products,” Alice Grassi from the International Platform of Insects for Food and Feed (IPIFF) tells FoodIngredientsFirst.

Combatting bugs reputation
Hee Cho, the project’s principal investigator, introduced the idea of disguising the mealworms in easy-to-cook and other convenience foods in order to counteract the perceptive distaste of the bugs.

The enviromental impact of meat heads the way for sustainable alternatives

The mealworms had a caramelization through the combination of heat, protein and sugar, creating a range of savory flavors. Roasting the worms formed flavor compounds similar to those that meat makes as it is cooked.

The scientists found the ten most savory complimentary flavors that best-resembled meat after conducting consumer research and built on them to create the best product. “As a result of this study, ten of the reaction flavors were optimized based on consumer preferences,” says Hyeyoung Park, a researcher on the project.

Even though eating insects is both an environmental and healthy alternative to consuming meat, their unappetizing reputation precedes them when it comes to consumer interest, according to the company.

While bugs are common superfoods in some countries' diets such as Africa, Asia, and South America, many areas such as the US and Europe have yet to integrate them in a mainstream way.

“At first, European consumers might be intimidated by the novelty of these products and the fact that they never tried them,” says Grassi.

However, there are burgeoning markets for insect protein and several companies are involved in R&D and working toward the commercialization of products once regulations are in place.

Grassi stated at the IPIFF “We believe that consumer acceptance is and would be driven by a change in socio-cultural aspects, product demand and accessibility. The more edible insect products can be found in our supermarkets and restaurants the more Europeans can discover different recipes and tastes in their diet and understand their environmental and nutritional benefits.”

Scientists from the Wonkwang University project are looking to combat the stigma some Eastern countries have about eating insects at the American Chemical Society (ACS) this week by presenting their findings. Their hope is that the mealworm seasoning they created will be more appetizing than their previous competitors.

Scientists on this project are looking to combat the stigma some Eastern countries have about eating insects at the American Chemical Society (ACS) this week by presenting their findings. Their hope is that the mealworm seasoning they created will be more appetizing than their previous competitors.

Why bugs
“Recently, eating insects has become of interest because of the increasing cost of animal protein, as well as the associated environmental issues,” says Cho.

Insects are some of the most sustainable forms of protein. That is why companies such as ValuSect have donated large amounts of money to the cause of edible insects.

In May of 2021, the EU allowed the commercialization of dried yellow mealworms. This was the first time that an insect was approved for consumption by the EU.

"This novel food is intended to be used as a whole, dried insect in the form of snacks or as a food ingredient, in a number of food products,” stated the European Commission (EC).

The UN’s Food and Agriculture Organization has cited insects as a valuable protein source to feed the globe’s growing population. According to a Barclays report, the insect protein market is estimated to be worth up to US$8 billion by 2023.

“These trends will also depend on different formulations commercialized by insect producers and manufacturers as well as the accessibility of the products to consumers. Growing demand for high protein food for sports nutrition, dietetic food or food supplements creates further opportunities for the insect sector,” says Grassi.

Researchers are offering a set of “critical success factors” for mitigating the recent challenges faced by the food cold chains in China. The rapid... Read More