You are in : All News > Enough and MeaTech 3D partner to boost mycoprotein and cultivated fat biomass hybrid food products

The partnership will facilitate Enough’s application as a semi-finalist to XPrize Feed the Next Billion food challenge, a multi-year US$15 million competition to incentivize teams to produce chicken breast or fish filet alternatives that replicate or outperform conventional chicken and fish.

“We embrace that the future of sustainable protein will include solutions based on plant, fermentation and cell cultivated technologies and are delighted to combine biomass fermentation and cultivated meat in collaboration with MeaTech’s Belgian subsidiary, Peace of Meat,” says Andrew Beasley, commercial director, Enough.

“The aim of our Enough-No Limits process is to produce lowest cost whole muscle vegan products that taste as good as the animal,” says Beasley.

Enough’s sustainable protein, Abunda, is grown by feeding fungi with sugar feedstocks sourced from grains in a large-scale continuous fermentation process, in a similar approach to brewing beer. The process produces whole biomass with a meat-like texture and is high in protein and fiber.

Enough (formerly 3F BIO) specializes in whole muscle chicken formats, which were demonstrated at the Future Food-Tech event in San Francisco, US, earlier this year.

Gaining success at XPrize, which targets scalable whole cut alternatives that mimic animal protein, is a significant focus of the partnership.

Earlier this year, MeaTech started the construction of a pilot plant and R&D facility in Belgium to facilitate Peace of Meat products and accelerate its cultured avian technology and R&D capability. “This collaboration has all the right ingredients to achieve our vision of using cultured fat biomass to create sustainable, hybrid products that offer consumers a more authentic and flavorful meat-like experience,” says Arik Kaufman, CEO, MeaTech.

The proximity of the Peace of Meat facility in Belgium to Enough’s flagship plant in the Netherlands further supports the move. According to Enough, the timescale to bring hybrid products containing cultivated fat to market will depend on future regulatory approval.

Cultured meat tech accelerates
MeaTech 3D has been developing cultured meat products from the onset of the plant-based and cultured meat movement. The company began constructing a pilot plant in 2021 to scale-up cultured chicken fat production. 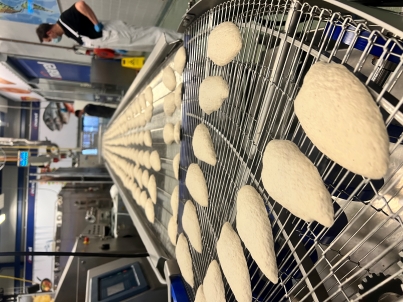 Abunda, the sustainable protein cultivated by Enough, is grown by feeding fungi with sugar feedstocks (Credit: Enough).Enough began constructing its “first of its kind” protein factory last year. The factory will have an initial capacity to produce 10,000 metric tons of mycoprotein per year, the equivalent of more than five cows’ worth of protein every hour. The 15,000 square meter facility is co-located alongside the Cargill facility in Sas van Gent, the Netherlands.

A survey conducted by Peace of Meat, supplier of cultivated fat, revealed that 68% of plant-based meat producers would be “likely or very likely to incorporate cultivated fat into their products.”

Peace of Meat surveyed companies from Kind Earth Tech’s most recent New Protein Map. Out of the 50 respondents, 58% reported that they are likely or very likely to use cultivated meat as an ingredient in their plant-based products.

Formulating the next generation of sophisticated meat alternatives relies heavily on non-animal fats which offer an authentic succulence property. In line with this movement, Swedish business Melt&Marble, for instance, revealed its non-animal fat with the properties of beef fat. Next, the outfit will upscale the fermentation and food divisions to facilitate process improvement and application testing.