You are in : All News > Dutch start-up Green Meat Products to debut plant-based doner kebab in UK

19 Nov 2019 --- Netherlands-based frozen and chilled foods company LAMEX Foods Europe and Dutch plant-based start-up Green Meat Products have entered into a new partnership which  aims to introduce Green Meat Products into the UK market. The company currently produces a range of plant-based shawarma, satay and sausage products, which are expected to debut in Britain  in the first quarter of next year.

“Our vegan doner kebab is 100 percent plant-based that can be sliced like a normal kebab. It is prepared like a chicken or veal doner on a standard vertical grill. We have also developed a satay line – indonesian satay, thai satay and japanese yakitori satay. At the moment we are finalizing the development of a vegan sausages range – hotdog, frankfurter, bratwurst and chipolata sausages,” Mark Laponder, Commercial Director of Green Meat Products tells FoodIngredientsFirst. 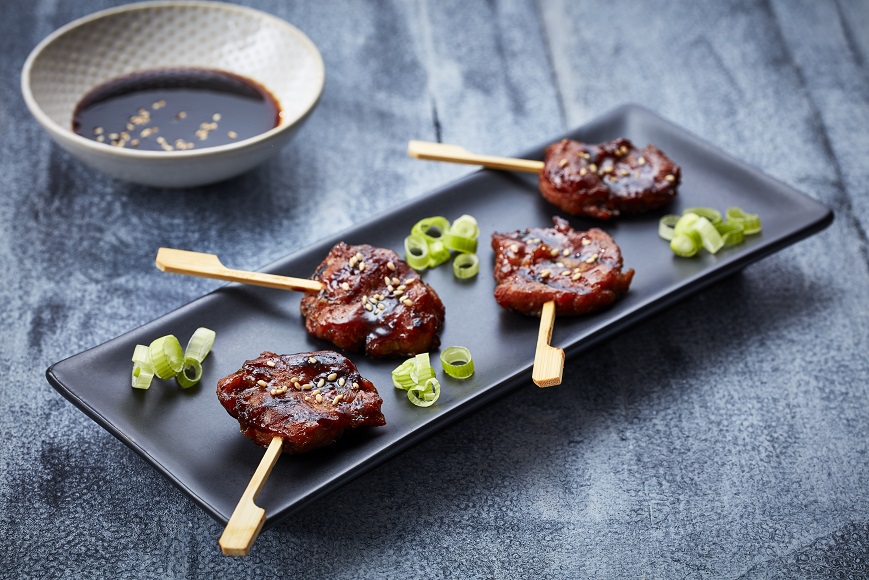 Click to EnlargePlant-based yakitori satay by Green Meat Products.“We believe these are products which have potential for the whole of Europe. At the moment we are focusing on the Netherlands, Scandinavia, Germany, Spain – and now, with LAMEX, the UK. The UK is a particularly significant market for vegan plant-based products, which could potentially be the biggest market for us based on our research. We are currently active in foodservice, but we are going to make steps into supermarkets and retail B2C.” he adds.

In August, Green Meat Products hosted an attempt at a world record of most vegan doner kebabs consumed at the Delft University of Technology, in the Netherlands. Together with students, the caterer and Rabobank, the company set out to prepare between 3,000 and 4,000 Vegan Doner Kebab sandwiches and distribute them for free.

“We can see that plant-based protein is a rapidly growing force and we are excited to be working with Green Meat Products and their market leading product range,” says Joe Gabbitus, Director of LAMEX Foods Europe.

Spike in UK appetite for plant-based offerings
Plant based growth has expanded into mainstream this year and is expected to flourish in the years ahead. In October, Innova Market Insights ranked “The Plant-Based Revolution” as second place in its Top Ten Trends list for 2020.

Veganism was hailed the “fastest growing culinary trend of 2018,” by Tesco, which reported strong sales for products with

Click to EnlargeVegan doner kebab by Green Meat Products.this positioning. The UK retailer recently predicted that one in five guests wouldbe preparing a meat free Christmas dinner for guests last year. Last year, the demand for chilled and frozen vegan food at Tesco increased by more than 50 percent, helping to swell the UK meat free market to £310 million (US$391.6 million).

In response to growing demand from shoppers looking to eat vegan and vegetarian meals, fellow UK retail player Waitrose increased its vegan offering by 233 percent in 2018 to cater to their needs. Waitrose & Partners reports that its vegan party food range is proving popular with customers with sales up by 20 percent since the initial launch in October. The trend, however, goes far beyond vegans alone. Twenty-one percent of people now identify as “flexitarian,” according to research by Waitrose & Partners in the 2018’s annual Food & Drink Report.

Product development to cater to vegans and vegetarians is an almost daily occurrence. For example, also in the UK, in early December 2018 it emerged that bakery company Greggs would launch a vegan sausage roll in the New Year in response to a petition from animal rights group PETA (People for the Ethical Treatment of Animals). The petition, which was signed by more than 20,000 people, was about satisfying demand for what it describes as an “ever-expanding” vegan market.

“Although vegan numbers are rising globally. This has not been the key factor in the growing interest in plant based eating. Rather it is the well-documented boom in the popularity of flexitarian diets that is fueling the mainstreaming of vegan products and the use of vegan-friendly certification,” reports Lu Ann Williams, Director of Innovation at Innova Market Insights.