You are in : All News > Dining deceptions: Quorn survey reveals prevalence of secretly cooking meat-free meals 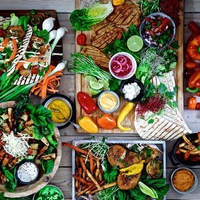 16 Jun 2020 --- As part of World Meat Free Week (June 15-21), Quorn commissioned a new piece of research across 1,500 British participants which revealed the prevalence of couples and families secretly cooking a meat-free meal without telling loved ones that it’s actually plant-based. In fact, one in ten Brits (11 percent) have secretly fed their partner meat-free food while 70 percent claim that their other half or family still have no idea they were fed a meat-free meal.

Fifty-two percent of the participants believe that a meat-free day a week is better for the planet and eight in 10 Brits (79 percent) believe cutting back on meat has become fashionable. Nearly a quarter of UK consumers (23 percent) believe it is cheaper to eat meat-free food.

Changing consumption habits
Environmental and health factors also influence UK consumers when it comes to eating habits and cutting back on animal products. The reasons for the dining deceptions included worrying that their partner is consuming too much meat (39 percent) and the notion that a diet lower in meat is better for the environment (40 percent).

Further to this, 52 percent of Britons maintain that a meat-free day a week is better for the planet, while cutting back on meat has generally become fashionable according to eight in ten Brits (79 percent). Similarly, 40 percent say minimizing your consumption of meat is better for the environment, while 16 percent worry that meat is harmful to consume.

When it comes to vegetarian food, 33 percent of the nation agree that the growing interest in meat-free meals is good and almost a quarter of respondents (23 percent) agree that cooking without meat saves money. However, the difficulties that some have experienced while trying to cut back on meat include the temptation to stick to tried and tested meat recipes (43 percent) and finding it hard to break an old habit (36 percent).

Perhaps this explains why nearly three in ten Britons (27 percent) have fed someone they know a meat-free meal on the sly. One in ten have fed their kids a secretly meat-free dish, seven percent have fooled their mum and two percent have even fed their colleagues meat-free food in the office on the sly.

Of those that have been secretly feeding their other half or family meat-free meals, 19 percent have been doing it for over a year, with 70 percent claiming they still have absolutely no idea.

“At a time where many people are becoming more conscious about the health and environmental impact of their food choices, we are delighted to see more people opting to use meat-free products in their diets. Even if it’s without realizing to begin with,” says Marco Bertacca, CEO at Quorn Foods.

“Hearing that 47 percent of Brits have used Quorn to replace meat in their diets is great and we are proud to be able to provide the best protein available for vegans, vegetarians and meat-reducers alike. After an incredibly successful Veganuary, we hope to see World Meat Free Week follow in its footsteps.”

This week in industry news, Barry Callebaut is reviving a classic British chocolate brand. In snacking, Nutella launched a new dip and croffles were highlighted by Baker... Read More

The advent of industry’s cell-based renaissance is being signaled by early movers in the space, particularly in Europe. Frozen food giant Nomad Foods has linked up... Read More