You are in : All News > Development in Aquaculture Feed Using Wine Waste 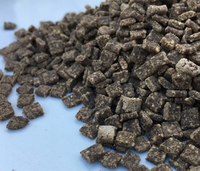 08 Jun 2017 --- Waste from the wine industry is being developed into aquaculture feed with highly promising results.

The South Australian Research and Development Institute (SARDI) has partnered with Tarac Technologies to work on the project. The research has so far produced a cheaper, better performing food source for the farmed abalone industry made from grape marc.

Steam distilled grape marc, registered as Acti-Meal, is the heat-treated skins, pulp, seeds, and stems of grapes left over after wine is made. Once known as a waste product, Tarac Technologies is a world leader in turning grape marc into a range of value added products ranging from grape spirit to stock feed, grape seed extract, grape seed oil and soil improvers.

A six-month trial of a test feed produced by Aquafeeds Australia containing 20 per cent Acti-Meal is set to begin at an abalone farm in November 2017 after successful lab trials in Adelaide, South Australia last year.

During the three-month lab trial at a water temperature of 22°C, greenlip abalone fed on a experimental formulated diet containing 5-20 per cent Acti-Meal improved the growth performance and feed utilisation of juvenile greenlip abalone compared to a commercial diet.

The abalone on the grape marc diet showed a 6 per cent improvement in biomass gain and a 2.9 per cent increase in shell growth rate compared with abalone fed on a commercial diet.

The grape marc-fed abalone also outperformed the other abalone in Food Conversion Ratio in the trial, which is the amount of food given compared with the amount of weight gained.

SARDI Nutrition and Feed Technology Associate Professor David Stone said cereals such as wheat, lupins and soy were traditionally used as a carbohydrate and energy source in commercial abalone feed. He said the Acti-Meal had the potential to replace some of those ingredients.

“As we added the grape marc in we got a significant improvement in growth and feed utilization,” Assoc Prof Stone said.

“They all grew well – there was no impact on the health of the animals, survival was 100 per cent.”

“The other bonus here is that we are removing something that costs $500-$800 a ton and replacing it with what is effectively a waste product that costs $250-$400 a ton – it’s a price reduction with a growth benefit.”

The feed comes in pinhead-sized granules for baby abalone and larger flat pellets for more mature abalone and will last in the water for 24 hours or more to allow for overnight feeding.

Assoc Prof Stone said the farm trial would run from the beginning of November until the end of April and would involve 100kg of either green lip or hybrid abalone spread across 16 commercial slab tanks.

He said the feed containing Tarac’s steam distilled grape marc product could be commercially available in the second half of 2018.

“If we get a good result on the farm, all of the feed companies and the growers will know about it within a couple of months and when we show them the results they’ll wonder where they get the stuff from,” Assoc Prof Stone said.

Previous SARDI/Australian abalone industry trials have led to protein increases in abalone feed that resulted in 10 per cent improvements in growth and a similar improvement in relative profitability.

SARDI scientists have also demonstrated in the lab how a 5 per cent dietary inclusion of grape seed tannin significantly reduces summer mortality rates for abalone when water temperatures exceed 22C.

According to the Journal of Shellfish, there was a global production of 129,000 metric tons of farmed abalone in 2015 compared with just 6500mt of wild-caught abalone. Of the farmed production, 115,000mt came from China while Korea was the next biggest producer with 9400mt. Australia farmed 900mt of abalone in 2015 but is one of the world’s biggest wild-catch abalone fisheries.

Assoc Prof Stone said one of the major challenges facing aquaculture was finding sustainable food sources that minimised the use of marine ingredients. He said using a waste product such as steam distilled grape marc went part of the way to achieving this.

“You don’t want to be taking 2kg of fish from the ocean to produce 1kg of fish in a farm,” he said.

Krishna-Lee Currie, who conducted the SARDI lab study, will present the trial findings at the World Aquaculture Conference, in Cape Town, South Africa this month.

“We’re interested in testing Acti-Meal for barramundi and silver perch feeds and we’ll run the diets in the lab to see if it works, and if so, then approach the growers and feed companies to organize an on-farm trial,” Assoc Prof Stone said.

“If it works with barramundi it may work for trout, salmon, kingfish and a whole range of other carnivorous species.”

“While the production levels for silver perch are very low they are just the model and if it works for them it will work for tilapia and carp, which are grown in huge quantities around the world.”

“The whole idea is that we’re on the doorstep of Asia and they’re looking for ingredients to use so they will look at this as just another commodity and it will start to flow that way.”

The Barossa Valley company exports up to 80 per cent of its grape spirit primarily to North America and Europe but also supplies to more than 50 boutique distillers around Australia.

As a bi-product of those processes Tarac produces about 130,000 tons a year of steam distilled grape marc, which is also used as a soil conditioner or stock feed.

Acti-Meal is steam distilled to kill bacteria to minimise microbial activity and remove any residual alcohol.

Tarac Technologies CEO Jeremy Blanks said apart from the lab tests using Tarac’s grape seed tannin it was the first time he was aware of wine industry bi-products being used in aquaculture feed.

“It was really through the discussions we had with SARDI and picking up on some of the early research they were doing that we identified aquaculture as a potential opportunity,” Blanks said.

“We are really looking forward to seeing what the results of those trials are because that’s really an important staging point to give us some scientifically verified analysis for us to then be able to take and develop further discussions with the industry.”

“The opportunity in terms of volume is undoubtedly into export, particularly into Asia and the work we’ve done with SARDI suggests that is if it is successful with abalone then than is a good indicator for its potential for some of the fin fish varieties and that would be the next step.”

The European Fisheries Committee has approved financial support for fisheries in the aquaculture sector to respond to shortages incurred by Russia’s invasion of... Read More

Two grape cultivars, Sugrafiftytwo and Sugrasixty, have entered the market thanks to a 13-year collaboration between Cornell AgriTech and Sun World International, a... Read More

Cargill has agreed to purchase 24.5% of the shares of Salmones Multiexport SA (MultiX), a subsidiary of Multiexport Foods SA, a specialist in salmon farming in Chile.... Read More

Marine aquaculture or “mariculture’’ colloquially, is gaining esteem as a sustainable food source for a seven billion plus human population. It... Read More