You are in : All News > Cost-effective carmine alternative scoops Start-Up Innovation Challenge Award 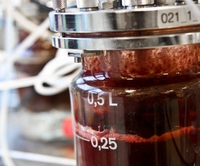 29 Nov 2017 --- Danish start-up company Chromologics has won the Start-Up Innovation challenge at Fi Europe for their natural red color solution. The biotech company, with just 5 employees, was spun out from the Technical University of Denmark after many years of research and is now looking to find funding in order to cross the lengthy and complex regulatory minefield ahead.

Chromologics has developed a patented fermentation process, employing a non-GMO filamentous fungus for the production of bio-based pigments. Their lead product is a red color, called ChromoRed, whose technical properties are more pH stable 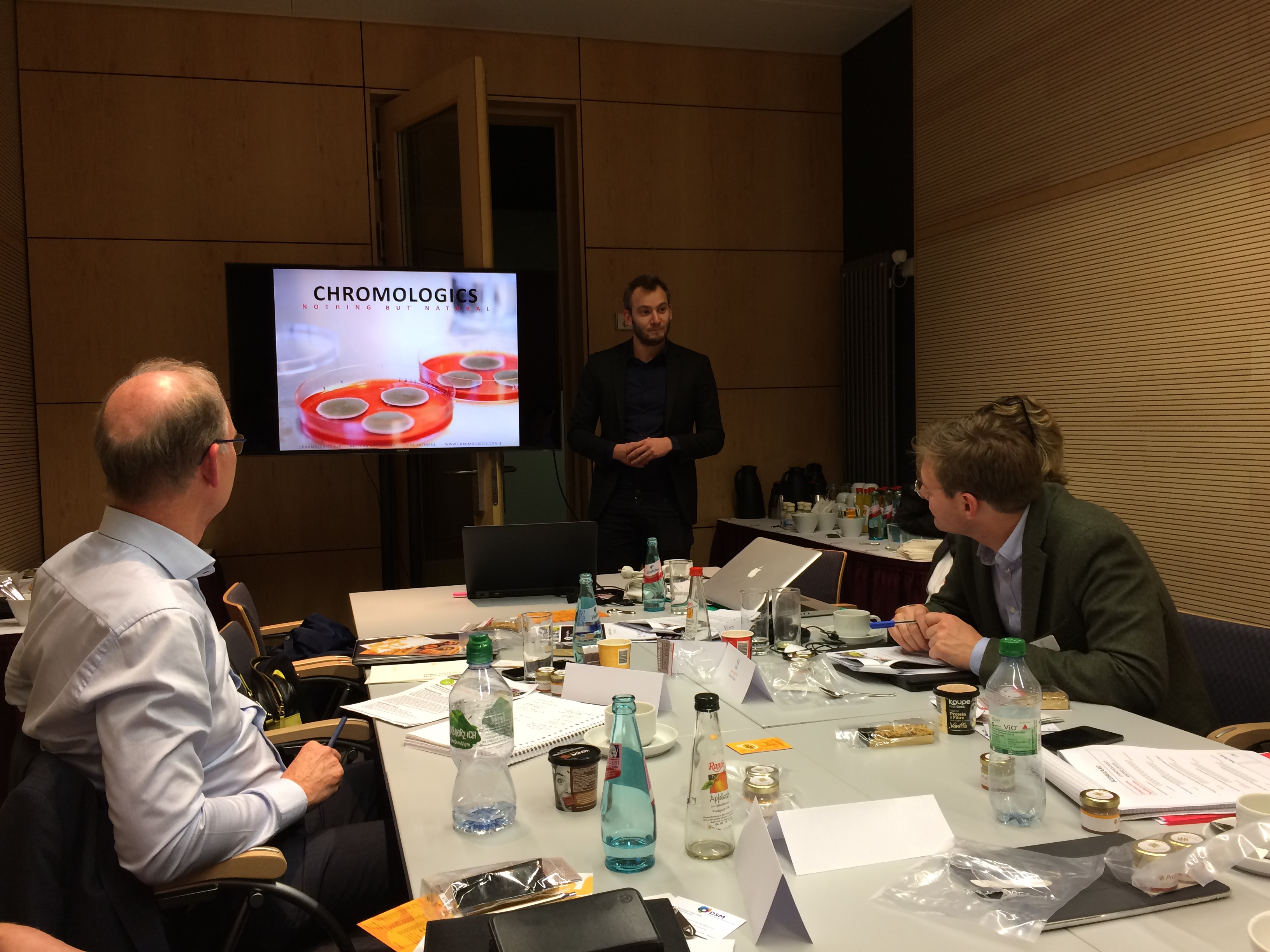 Click to Enlarge and heat stable than most of the competing natural red colorants.

The company started in September 2016 and applied for funding, receiving initial soft money funding of US$200k. They subsequently filed a patent and then signed the spin-off deal. Chromologics is now looking to raise a further US$500k in the short term in order to “lock the process” and start the regulatory pathway for clearance.

“Consumers want natural foods and natural ingredients. All over the world this is the case. Color is key when deciding which food to purchase and these types of trends have led major companies such as Nestle to aim to get rid of synthetic colors and switch completely to natural colors,” CSO Anders Ødum notes in a presentation.

“But there are some issues with natural colors – most are extracted from agricultural crops, such as tomato, beetroot and black carrot and they have very low yields, which then leads to seasonal dependent prices. Carmine is a very dependable color, which is extracted from insects and trades at just US$100-120 per kilo, but because it is from insects it is not vegan, halal or kosher, which is a major problem for many. On the other hand natural colors are very unstable from a pH perspective,” he says.

Chromologics offers a solution from fermentation, produced in a similar way to how enzymes are produced for detergents. “Our color is a sustainable, stable, highly cost-effective and very similar in performance to carmine. The ingredient has a highly intense red, which means that very little is required to color foods. We have patented the compound itself,” he notes.

In classic start-up style, the potential active strain came to light by total chance. “A professor found the fungus growing on a supermarket on a bell pepper and thought to himself ‘we don’t have this in our strain collection’,” he quips.

Ødum notes that there are not taste issues with the ingredient. “We taste-tested it in milk and water applications. We blind tested it and couldn’t taste any real difference. The taste is very neutral. We did the first toxicity testing and it passed very well without being genotoxic.” The company is currently testing their ingredient in meats and yogurt applications.

Carmine replacement will be the priority for this ingredient innovation. “We really want to help our customers to replace carmine, which is a market worth around US$200 million a year. We can also look to replace synthetics too but carmine is the one that all companies really want to get rid of. There are a lot of big ingredient companies in this space, but we believe that it is possible to enter it because we have a new compound and a completely different process with some very good features. The pricing stability is something that the other ingredients don’t have. With time we will be able to reduce it further even,” he explains. “We are aiming at being available at the same price as carmine once we can increase the yields.”

In fact Chromologics has collaborated with two major food colors suppliers in the development process. “They have really helped us to identify which parameters are good and which markets we should go for.” “In terms of potential exits, we will have to assess the situation at that given time, as we are in this to build a real company.”

Ødum notes, however, that they are still in the development phase and need to get regulatory approval and an additive approval with corresponding E-number. “This means that it may take 3-4 years before we get to enter the market,” he notes.

Moving forward from a development perspective, other colors, such as yellow are possible. “We have some ideas for how to make blue and purple colors but that would require genetic engineering. We could also maybe use it as a novel food in cheeses, or in cereal bars as the fungus used naturally contains a lot of fiber. In China there is a similar product which is used as a supplement, so that could maybe work too,” he says. “The problem is that many colors are well-known structures, so it is difficult for companies protect potential investments.”

Koupe finished as runner-up in the main award. This Dutch company has developed a new range of high-protein ice cream that is promoted as tasty, but also good for health, compared to normal ice cream. 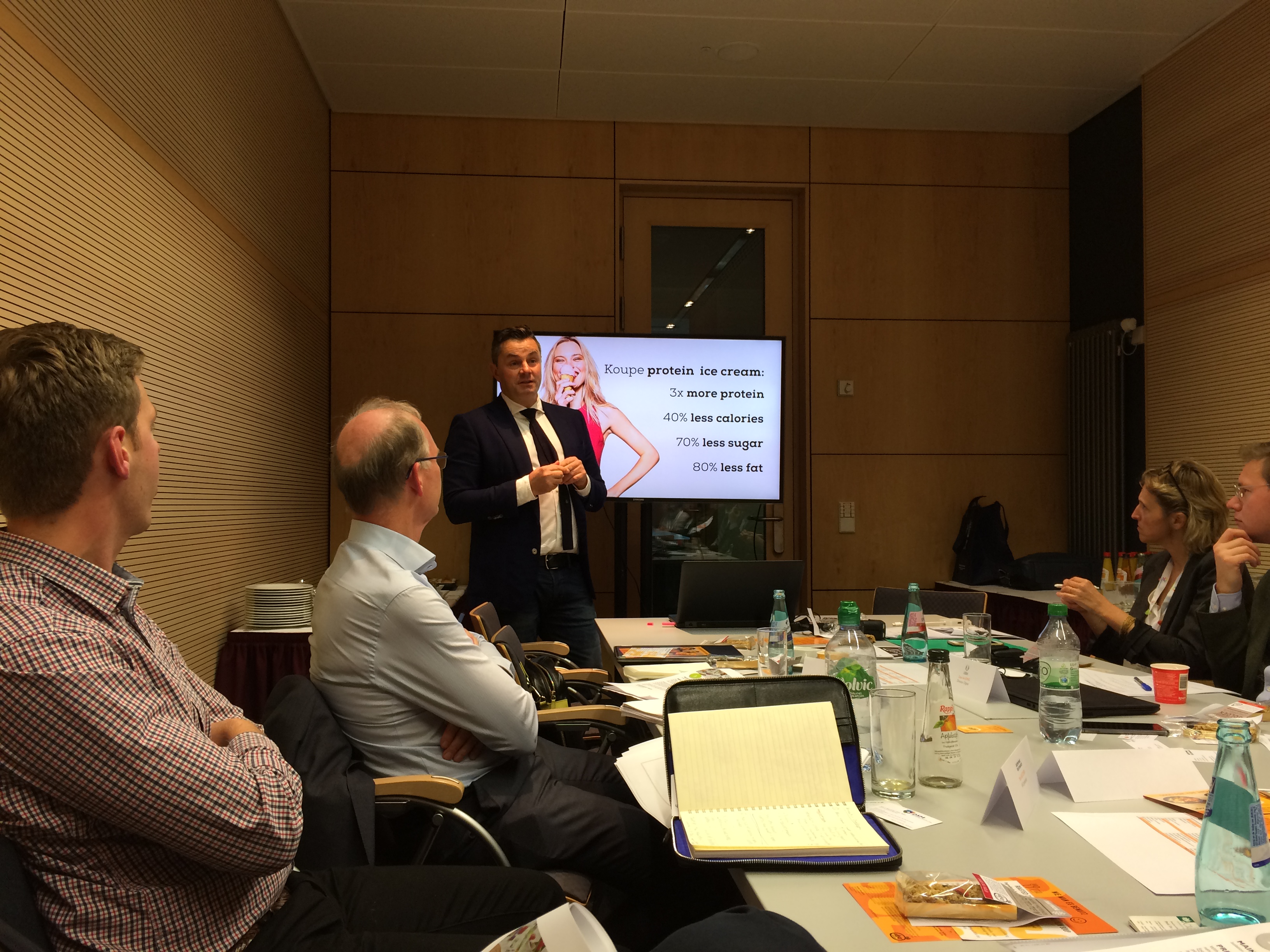 The product has 40 percent less calories, 70 percent less sugar and 3 times the amount of protein and fiber. Koupe's protein ice cream delivers a healthier and smart alternative to conventional ice cream. One portion of Koupe contains more protein than three egg whites, less sugar than an apple and more fiber than a portion of broccoli. Independent research indicates that 96 percent of the Dutch rate the ice cream as (very) tasty. Because of its health benefits, Koupe set up a cooperation with “Food for Care” at the Dutch hospitals The University Hospital Radboud UMC in Nijmegen and the AMC Hospital of Amsterdam, where Koupe was offered as a part of a healthier diet for patients.
Koupe’s four flavors are available in the following Dutch supermarkets: Albert Heijn, Jumbo, Dirk and DekaMarkt. Internationally, Koupe is available at Ocado, the largest online supermarket of the UK, several Danish supermarkets and Albert Heijn supermarkets in Belgium. “The challenge for our protein ice cream was mouthfeel: how can we reduce sugar and fat, but still get a great, smooth texture, with creaminess and fullness?”
Jaco Pieper at the company tells FoodIngredientsFirst: “How can we create an indulgent, full product that is free from the ‘bad’ ingredients? We managed to do this by including whey protein and fiber in our ice cream; these ingredients which took over some of the functions of the fat and sugar. But protein has some flavor issues, so we had to really balance and choose the right flavors, for example, the premium cocoa powders.”
Third place was given to Innovopro, which has developed an exclusive and innovative technology that enables the extraction of 70 percent protein concentrate from chickpea: a non-GMO, sustainable, healthy and tasty vegan source. The product is claimed to meet the food industry's demand for sustainable, reliable, nutritious and highly-functional plant-based proteins, in order to meet rising demand and diverse the massive usage of soy protein. A number of exclusive nutritional and functional qualities give chickpeas unique value in the plant-based protein market.
Chickpeas are considered a super-food with substantial health benefits. Chickpea protein enables the formulation of clean label products with high-quality plant protein and no additives, without compromising on taste or appearance. It is a superb substitute for soy, whey protein, eggs, gluten and other ingredients. Unlike many other plant-based proteins, chickpea protein functions also as an emulsifier and foaming agent to provide dairy-free, gluten-free and egg-free goods with an airy and lightweight texture. Chickpea protein is both light in color and subtle in flavor, making it the perfect ingredient for many applications in the food industry. It also enables the removal of texturizing agents in an innovative natural production process, with no additives.

A “Natural Ingredients” special prize was given out by Naturex from the award nominees. This prize was awarded to Alver Golden Chlorella. This new Swiss company is addressing the growing demand for tasty low impact, high-protein foods, by developing a range of healthy, tasty and sustainable foods with the microalgae Golden Chlorella. Golden Chlorella has 63 percent protein (meat has 25 percent) and is rich in potassium, magnesium, zinc and vitamin B. Chlorella is mostly known for its immune system boosting properties and for detoxifying the body, especially from heavy metals. Other benefits include brain maintenance, eye and skin health. It is also known to promote weight loss and lower blood sugar/cholesterol.
Alver Golden Chlorella is claimed to be truly distinctive and innovative because of its neutral taste and golden color. This has been achieved through a natural fermentation process. Golden Chlorella can easily be added to all foods without disrupting consumers’ eating or cooking habits. This unique product is effectively taking microalgae from a complement to an easy-to-use daily ingredient that will improve both health and carbon footprint.
Golden Chlorella is fermented to ensure the highest levels of micro and macronutrients. The production is highly sustainable requiring on average 44 times less water, 41 times less arable land and emits 36 times less CO2 than for the equivalent of beef protein. Alver Golden Chlorella was founded by Mine Uran, the former Head of Protein R&D at Nestlé who has spent the past 20 years searching for the ideal non-animal protein, and Majbritt Byskov-Bridges, a business strategist. The first Alver Golden Chlorella product was launched in May 2017 in Switzerland at the Vitafoods Europe event.

Byskov-Bridges tells FoodIngredientsFirst: “We’ve identified the following typical customers: vegans, vegetarians and flexitarians. Research shows that 72 percent of clients buy Alver Golden Chlorella for environmental reasons, 30 percent for sports and well-being and 10 percent due to intolerances and allergies. We are looking to scale-up and create a range of products that are high in protein.”
By Robin Wyers

26 Aug 2020 --- Chr. Hansen has launched a new strategy geared toward fermented plant bases, adding to its existing microbial platform to improve the future of food with good... Read More

25 Aug 2020 --- The GNT Group has expanded its range of yellow Exberry Coloring Foods with a new powder made from company-cultivated carrots that enable manufacturers to deliver a... Read More