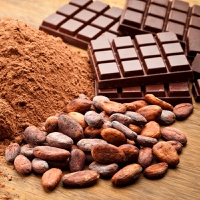 26 Apr 2021 --- Researchers have identified key odorants that chiefly contribute to off-flavors in fermented cocoa. They have now established maximum concentration levels to avoid the incorporation of cocoa that smells musty, moldy, smoky or like horse dung into food production.

Off-flavors in cocoa can be a major challenge for the food industry, and until now, they could only be detected by a trained sensory panel, note the researchers from the Leibniz Institute for Food Systems Biology at the Technical University of Munich who identified the odorants.

“Previously, there was no approach to objectively evaluate off-flavors in cocoa on the basis of the concentrations of the causative odorants,” they write.

The food industry can now use the results published in the Journal of Agricultural and Food Chemistry to objectively assess the sensory quality of fermented cocoa based on odorant concentrations.

Identifying off-flavored cocoa batches during the incoming goods inspection can help enterprises of any size avoid economic damage early on.

The researchers found about 40 to 65 percent of total geosmin is found in the seed coat (testa) of fermented cocoa beans (Credit: Martin Steinhaus).Identifying off-flavors
As part of the Research Association of the German Food Industry’s project, the research team determined the odor threshold values of the identified substances to derive maximum concentration limits.

The team recommends a maximum tolerable concentration for the off-flavor substance geosmin of 1.6 μg per kg of fermented cocoa.

Even in the lowest concentrations, this odorant has a musty, earthy smell reminiscent of beetroot. Geosmin is presumably of bacterial origin. For fecal, mothball-like smelling 3-methyl-1H-indole, the researchers recommend a limit of 1.1 μg per kg of fermented cocoa.

Uneven distribution
The research team’s findings also show that about 40 to 65 percent of total geosmin is found in the seed coat (testa) of fermented cocoa beans.

In contrast, the off-flavor substance 3-methyl-1H-indole was predominantly found inside the beans. “The uneven distribution of the two odorants between the seed coat and the embryo is another important aspect that chocolate manufacturers should consider when testing fermented cocoa,” says Martin Steinhaus, a food chemist who led the team of researchers.

“At the moment, we do not know how much geosmin is transferred from the shells into the embryo during the roasting process. Therefore, it might be reasonable to remove the seed coats before roasting rather than after roasting.”

The olfactory receptor that contributes decisively to this sensory impression was recently uncovered by researchers at the Leibniz Institute for Food Systems Biology at... Read More

Scientists at the Technical University of Munich (TUM) and the Leibniz Institute of Food Systems Biology (LSB) have developed a new methodology that quickly, easily and... Read More

A new methodology for the simultaneous analysis of odorants and tastants has been developed by scientists at the Technical University of Munich, Germany, and the... Read More

They initially tested the bitterness or sweetness that each glycoside evokes in vitro, using cells that act as taste receptor cells and react to the glycoside molecules... Read More