You are in : All News > Cocoa butter performs as “key functional ingredient” for 3D-printed plant-based meat alternatives, study finds

09 Dec 2021 --- With meat alternatives on the fast-track toward diversification, Chinese food scientists are delving into new blends of plant-based ingredients tailored for 3D printing. In a study reported in ACS Food Science & Technology, some of their most successful recipes required a thermosensitive ingredient to help with fluidity – cocoa butter.

Researchers Songbai Liu and Shanshan Wang tested soy and wheat proteins in formulations containing several other ingredients using a 3D printer. They set out to figure out an approach to making a meat “dough” with these blends that could be produced effectively with the machine.

Print your food
3D printing is expanding in its capacity to deliver texturization in meat alternatives, such as Redefine Meat’s sinewy whole cuts of vegetable meat designed to “bleed” authentically.

The researchers evaluated their concoctions based on the accuracy with which the dough could be laid down by the printer and how well it held its form. They also examined its texture and microstructure.

Addition of appropriate amounts of cocoa butter, Tween-80 and sodium alginate and Tween-80 – an emulsifier also known as polysorbate 80 – was found to be “essential to achieve superior 3D printing performance.” 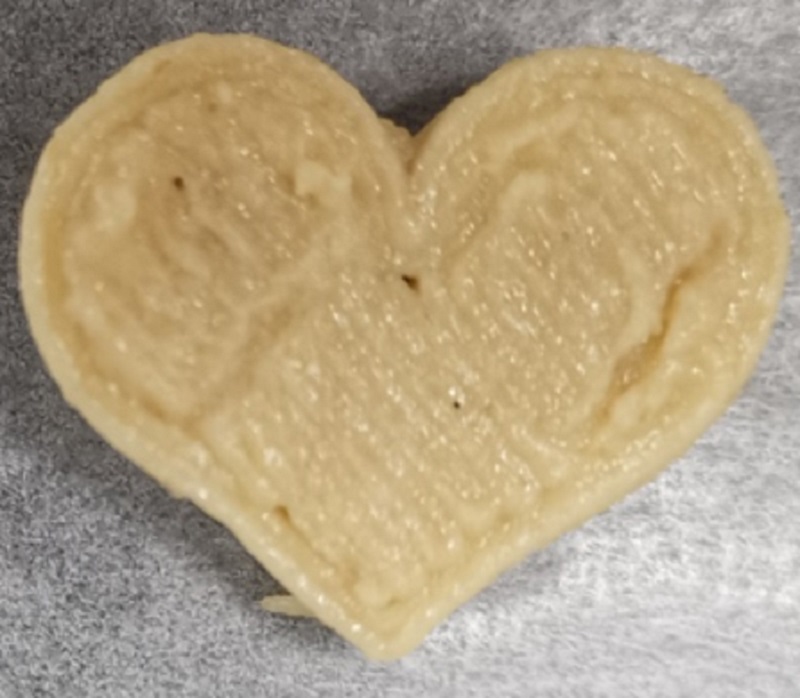 That’s not cookie dough – it’s a meat alternative created with a 3D printer and plant-based ingredients, including cocoa butter (Credit: ACS Food Science & Technology).Cocoa butter’s role in alt-meat applications
Heat-sensitive cocoa butter turned out to be a particularly important ingredient, making the dough more fluid at warm temperatures for printing, but then hardening afterward at room temperature, allowing the dough to retain its printed shape.

The investigations revealed that the hydrogen bonding interaction of the soy protein and gluten network helped ensure the essential fibrous architecture of the gels.

Acknowledging that some consumers cannot eat wheat gluten or soy because of allergies or celiac disease, the researchers attempted to replace the soy protein with that from peas.

However, the resulting pea protein-based dough was too soft for printing and lacked the same structural integrity.

The authors of the study received funding from China’s National Key Research and Development Program, the Zhejiang Public Welfare Technology Research Program, the Qinghai Science and Technology Program and the Foundation of Fuli Institute of Food Science at Zhejiang University.

Among notable advancements, engineers at the Columbia University School of Engineering and Applied Science, in the US, have worked on 3D printing technology alongside software-controlled robotic lasers to assemble foods.

Israel-headquartered MeaTech is leveraging 3D bioprinting aims as an industrial process for producing cultivated meat cuts, such as slaughter-free steak or chicken breast. Similarly, Singapore-based Shiok Meat’s use of 3D printing was found to successfully simulate the authentic mouthfeel of shrimp meat in its cell-based analog.

Elsewhere, researchers have found that soft milk-based products can now be 3D-printed at room temperature without additives, thus preserving its temperature-sensitive nutrients. This particular application targets patients in hospitals with special dietary needs.