You are in : All News > China Takes on New Strategy on Reducing Food Waste 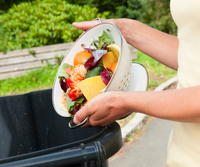 16 Jan 2017 --- China is beginning to make moves in the anti-food waste space with a new focus on cutting wasteful ways in industry, across the supply chain and in the home. According to campaign group Sustain, the country is finally starting to recognize its food waste problem, which is magnified because of China’s 1.4 billion population.

The sheer size and scale of the challenge was highlighted late last year, when a team of researchers from the Chinese Academy of Sciences told a Food Waste Forum in Beijing about the findings of a detailed investigation.

The team surveyed almost 7,000 tables and 366 restaurants in four cities (Beijing, Shanghai, Lhasa and Chengdu) conducted hundreds of interviews, collated 7,500 questionnaires and weighed 32,000 dishes. They calculated that in total 17 to 18 million tons of food were wasted every year in China. And in the foodservice industry, the food discarded from restaurants is enough to feed between 30 and 50 million people.

“It is no secret that food loss and waste is a big problem,” said Xie Yuhong, deputy secretary-general of the All-China Environment Federation, during the forum.

China is looking into a variety of ways to reduce food waste, alleviate poverty and improve greenhouse gas emissions. These include the use of big data in cafes that can, for instance, help a company cut down on waste by determining how many customers are in the building to eat and what they are likely to choose by identifying the most popular dishes on given days.

Other companies are tying food production to data from smart cards that employees use to enter buildings.

“Along with food losses from the supply chain and domestic kitchen, this represents a massive waste of resources, plus substantial methane emissions from landfill. But the good news is that the problem is at last being recognized,” says Sustain.

Publication, China Daily reports how campaigns are underway to reduce China’s massive food waste footprint and how the issue is particularly significant in places like Hong Kong where most discarded food ends up in landfills alongside other types of solid municipal waste. It says approximately 5.5 million tons of solid waste ended up in landfill in 2015, a third being food - and the numbers continue to rise.

Researchers from the Australian-based University of Sydney and Curtin University have published a book featuring the main food production and consumption problems at... Read More