You are in : All News > Catholic charity accused of exacerbating climate change and poverty with animal gifting program

09 Sep 2022 --- A coalition has formed to urge the Catholic Agency for Overseas Development (CAFOD) to end its animal gifting program to honor its commitment to climate and animal justice. The criticism came after a whistleblower reportedly discovered that CAFOD had appealed for money to replace goats that had been unexpectedly eaten by recipients.

Interfaith Vegan Coalition, In Defense of Animals, Plant Based Treaty and Catholic Concern for Animals are among those challenging CAFOD to discontinue its animal gifting program. On August 18, the coalition sent a letter to CAFOD and an article titled “7 Reasons Not to ‘Gift’ Animals.”

Numerous organizations promote sending live farmed animals as “gifts” intended to reduce hunger and poverty in low-income countries. However, the true cost of sending a goat, cow or chicken, argues the coalition, is environmental degradation, zoonotic disease outbreaks, health problems such as diabetes, more community slaughterhouses, and even childhood trauma from watching beloved animals get slaughtered.

In response to the criticism, A CAFOD spokesperson tells FoodIngredientsFirst that livestock can be the difference between life and death and is usually provided to families who have no other way of making money.

“It is right that we respond to people’s immediate needs, especially when it can prevent malnutrition or starvation. But CAFOD also supports some of the world’s poorest farmers to adapt to climate change and grow food sustainably,” they say. 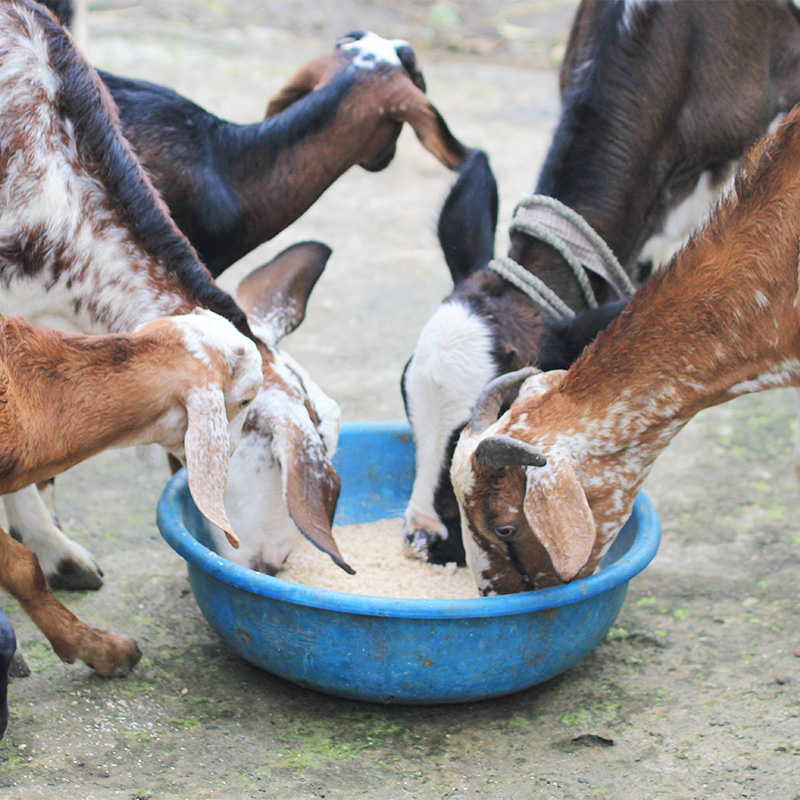 A whistleblower reportedly discovered that CAFOD had appealed for donations to replace goats that had been unexpectedly eaten.

A goat conveyor belt?
In a parish in Lancaster Diocese, UK, a CAFOD representative allegedly explained in an email to its supporters just before Christmas that it needed to buy more goats because some recipients were eating them.

The coalition asked CAFOD how many goats have been eaten in this way and the number of occasions when CAFOD had sent an additional goat due to one having been eaten. In an email response on April 28, CAFOD stated: “It is not our policy to replace goats if the goat has been eaten.”

“They do not say it is their policy not to replace goats who have been eaten,” says Virginia Bell of Catholic Action for Animals. “There is a difference. What I want to know is, do they have a definite, written policy of not replacing goats who have been eaten? On the other hand, if it’s their policy not to replace eaten goats, then why did they go against this in Lancaster?”

Piling on the poverty
CAFOD provides goats to marginalized communities, where it argues livestock is a traditional way of life, providing families with an essential means of income. Families are given one or sometimes two goats, which can provide milk or cheese, fertilizer to improve crop yields and breed kids for sale as meat.

However, World Land Trust calls animal gifting programs “madness…environmentally unsound and economically disastrous” and considers it “grossly irresponsible…to continue with these schemes...as a means of raising quick money for charities over the Christmas season.’’ It insists that gift animals will intensify environmental problems in areas of drought and desertification.CAFOD says livestock can be the difference between life and death for marginalized people, but the coalition views the model as “short-sighted.”

“These vulnerable animals are sent to vulnerable people – is it any wonder that things go wrong? It is because of short-sighted economic models like this that the planet is suffering an environmental emergency now,” adds Nicola Harris, communications director at Plant Based Treaty.

Meanwhile, Maneka Gandhi, former Indian Minister for Social Welfare and Animal Protection, argues that people who receive the goats have an even poorer lifestyle within two years. “A goat destroys the fertility of land and any milk or dung it may give is very little (in value) compared to the havoc it wreaks,” she says.

Promoting plant-based diets
The coalition recommends that charities focus on the adoption of plant-based diets amid growing climate change fears and evidence of health problems linked to meat- and dairy-based diets. It suggests that development charities alleviate poverty and hunger by:

Plant-based diets are suitable for all stages of life, and the poorest regions of the world urgently need help with access to tools, seeds and irrigation, argues Harris. “Communities are often unable to grow food as they lack access to quality seeds in high quantities. Charities should prioritize community seed hubs and help set up community gardens, which focus on a diverse range of protein-rich crops such as beans, lentils and peas,” she tells FoodIngredientsFirst.

However, inertia around plant-based diets also stems from the animal agriculture industry’s “disproportionate lobbying power” and governments’ concerns that telling people how to eat is “politically risky,” adds Harris.Plant-based diets are increasingly seen as pivotal to human and environmental health.

“Therefore, it is imperative for the UK government to roll out public education campaigns alongside incentives that support farmers in the plant-based transition. We know from consumer research that 1 in 3 Brits would support government calls for the promotion of plant-based foods to address the climate crisis.”

This week, Haarlem in the Netherlands became the first city in the world to ban meat advertisements in all public spaces to discourage meat consumption.

“Animal gifting programs are prevalent due to the predatory nature of the animal agriculture industry. They are creating new markets in vulnerable communities; in a tactic taken straight from the tobacco industry toolkit,” she continues.

“Other charities are showing a responsible attitude toward poor people, animals and the environment, such as A Well Fed World, Food for Life Global, Fruit Tree Planting Foundation and International Fund for Africa, by providing plant-based food solutions. CAFOD needs to change.”