You are in : All News > “Bleeding” vegan burger debuts in UK as global struggle against “fake meat” intensifies

05 Jul 2018 --- The plant-based Beyond Meat burger that has been making waves in the US because it looks, cooks and satisfies like beef, is arriving in the UK for the first time. Tesco is expecting the vegan-friendly Beyond Burger, that is infamous for mimicking meat by “bleeding” when it’s cooked, will be on shelves alongside meat products next month. It will also be available via London’s Honest Burgers chain alongside beef and chicken options.

The move into the UK comes at a time when meat alternatives are causing quite a stir around Europe with controversial struggles in France between so-called “militant vegans” and the meat industry.

The CFBCT (French Butchers Confederation) recently met with butchers and fishmongers following a spate of incidents in regions including Lyon and Angier. Businesses are being “attacked” and vandalized, having their windows smashed and anti-meat slogans daubed on their shopfronts, in some cases splattering the shops with fake blood.

This follows a series of incidents in Lille last year when meat-selling stores were also vandalized with fake blood.

Another plant-based burger, The Impossible Burger, is also in the spotlight in New Zealand after acting prime minister Winston Peters criticized the fact that it is being served on Air New Zealand.

Peters believes that The Impossible Burger – which also “bleeds” during cooking – poses an “existential threat” to the country’s meat industry and has slammed the use of synthetic meat.

The Impossible Burger is made from pure ingredients, including water, wheat protein, potato protein and coconut oil. One special ingredient – heme – contributes to the characteristic taste of meat and is the essential catalyst for all the other flavors when meat is cooked. Heme is a fundamental molecular building block of life, one of nature's most ubiquitous molecules. Although it's found in all living things and in virtually all the food we eat, it's mainly abundant in animal tissues. Impossible Foods scientists discovered that it's the abundance of heme in animal tissues that makes meat taste like meat.

But, Peters claims to be “utterly opposed to fake beef,” and says the national carrier should be using real animal products.

The Impossible Burger is being served to business class passengers on flights from Los Angeles to Auckland.

Last month, Sainsbury’s began trials of stocking meat alternative products in its meat aisles as opposed to their own dedicated sections. As retailers positioning strategies are shifting, shoppers in the UK are expected to be getting used to seeing meat and meat alternatives right next to each other in-store.

Tesco’s Beyond Burger launch also comes at a time when flexitarianism is one of the fastest growing consumer categories, while veganism is also on the rise.

Innova Market Insights data shows that there has been a 45 percent average growth for food and beverage launches with a vegan positioning (CAGR, 2013-2017). New launches with a vegan positioning increased its market penetration in Europe from 1.5 percent in 2013, to 7 percent in 2017. As a consequence, meat substitute offerings are expanding rapidly. 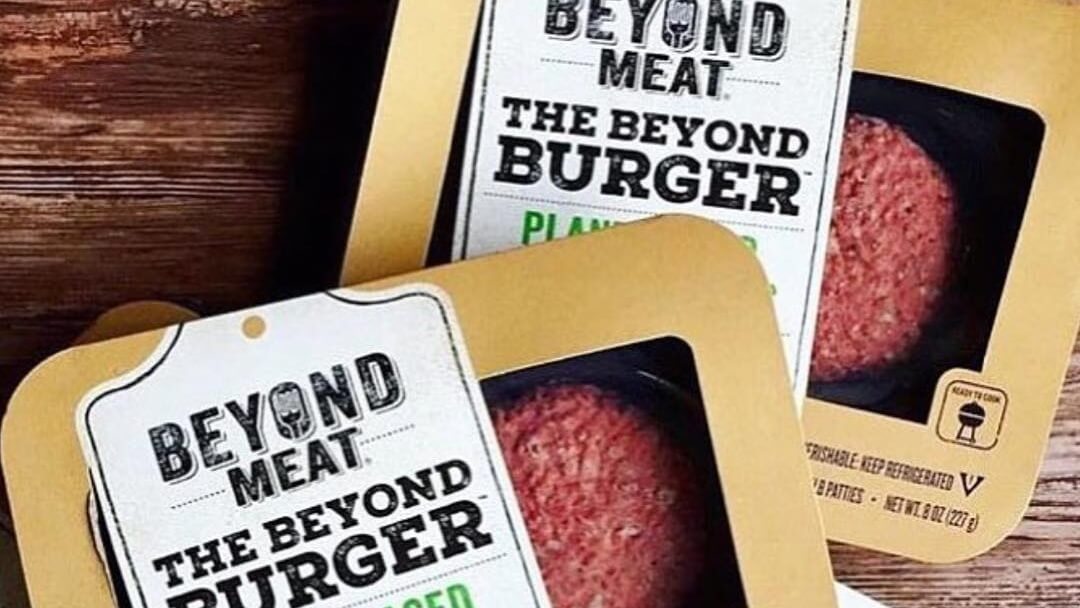 What is the Beyond Burger?
Designed to appeal to dedicated carnivores just as much as vegetarians and vegans, the plant-based burger contains around 20g of protein, no soy or gluten or GMOs and zero cholesterol. The primary ingredient is pea protein and it also contains vegetable oils yeast extract, binders and plant fibers.

Beyond Meat states that its mission is to create mass-market solutions that perfectly replace animal protein with plant protein. Through doing this, the company hopes to improve human health, positively impact climate change, conserve natural resources and respect animal welfare.

“In the case of the UK, we have a strategically decided this is a priority market,” he says.

It has been planning a UK roll-out for a while, specifically targeting Britain as a key market as an increasing number of people are dropping meat, or reducing it, from their diets for ethical and health reasons. Manufacturers and food innovators are ramping up new product development in meat alternatives to cater to them.

The Beyond Burger debuted in the meat department of Colorado Whole Foods in 2016 and has since expanded to approximately 11,000 distribution points including Safeway, several fast-food chains, Yale University, vegan market Green Common in Hong Kong and foodservice giant Sysco.

It will become available at all of A&W Canada's locations, the second largest fast food chain in the country, next week.