“All we want is to raise awareness of the issues in chocolate and the need for human rights legislation – in a positive, upbeat, and collaborative way. Besides, the chocolate industry has been calling for legislation before. So, after all, we’re asking for the same thing,” Paul Shoenmakers, head of impact at Tony’s, tells FoodIngredientsFirst.

The bars, which are available in the Netherlands, Belgium, the UK, Ireland and the US, have reportedly been pulled from Sainsbury’s supermarket shelves in the UK.

“[The Sweet Solution bars] were planned to be available from UK supermarkets. However, after one day in stores on January 21, some big chocolate makers put pressure on Tony’s retailers to remove them because they didn’t want to be associated with the claims of illegal labor in the chocolate industry,” Shoenmakers continues.

Sainsbury’s under pressure?
Currently, Tony’s does not list Sainsbury’s as a retailer for this specific line, and the supermarket’s website does not include these bars among the other Tony’s products it carries.

However, photographs circulating on Twitter show a display of the bars in Sainsbury’s two weeks ago.

“Big choco put a lot of pressure on retailers to remove them. But, this won’t stop us from campaigning to make all chocolate 100 percent slave free,” Tony’s commented on a Twitter thread that had asked whether Sainsbury’s had removed the line.

A spokesperson for Sainsbury’s tells FoodIngredientsFirst the company cannot comment on individual suppliers.

A Ferrero spokesperson adds that it did not ask Sainsbury’s to remove the campaign.

A “collaborative” intention
Shoenmakers does not believe the campaign will cause any legal friction with other chocolate companies because it has a positive tone and collaborative intention.

Mars Wrigley, the company behind Twix, has responded positively to Sweet Solution.

“We welcome Tony’s and any other company’s commitment to tackle child and forced labor,” Roel Govers, corporate affairs director at Mars, tells FoodIngredientsFirst.

“Child and forced labor have no place in the cocoa supply chain, which is why Mars Wrigley has committed US$1 billion as part of its Cocoa for Generations strategy to help fix a broken supply chain.”

The Ferrero spokesperson acknowledges that child labor exists in the cocoa sector, but says that the company has been working on tackling it for years.

“We welcome opportunities for more robust collaboration to put farmers and their families first. To go further and faster, we are also calling for child and forced labor monitoring and appropriate governance legislation to help address the root causes of child labor in West Africa,” he continues.

In September, Mars Wrigley also publicly revealed an interactive map detailing where it sources cocoa from to boost its supply chain strategy.

“Legislation, in combination with the efforts that we as Ferrero and the rest of the industry are making, should lead to the elimination of [child and forced labor],” adds the Ferrero spokesperson.

Mondelēz (Toblerone) and Nestlé (Kit Kat) have not replied to FoodIngredientsFirst’s requests for comment. 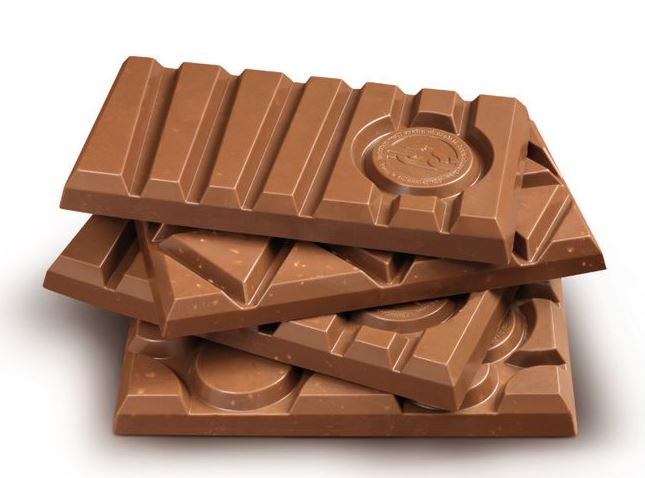 Each bar is 180 g and marketed as “unmistakably Tony’s.” (Source: Tony’s Chocolonely)

The company points to a US-government sponsored NORC report published in October 2020, which found that over 1.56 million children and at least 30,000 victims of modern slavery are forced to work on cocoa plantations.

“Voluntary measures have failed, and self-regulation is clearly not enough. Companies are not legally obliged to do their due diligence to trace violations of human rights in their supply chains, let alone solve them,” says Tony’s.

Petition hidden within packaging
Tony’s explains the four bars are inspired by the “world’s most iconic chocolate brands that together are the face of a big chocolate industry.”

Brightly designed paper packaging has long been a key part of Tony’s brand identity, which is positioned as progressive and eco-friendly. Last month, the company announced it would adopt Sappi Guard Nature MS paper-based pouches for the secondary packaging of its “Tiny Tony’s” chocolate varieties.

While the Sweet Solution bars’ exterior packaging is likely to grab consumers’ attention thanks to its similarity with other brands, its interior packaging also plays an important role.

The inside of the wrapper has a link to a petition for human rights legislation that holds companies legally accountable for modern slavery and illegal child labor in their supply chains. All profits from the Sweet Solution bars will be donated to 100Weeks.

Holding each stakeholder responsible
Responsibility should lie with every stakeholder in the chocolate industry, argues Shoenmakers. “Governments need to change legislation, which is why we have launched our petition.”

“Consumers need to be aware of the bitter truth of the industry and choose more consciously, retailers need to be aware and source more responsibly and ultimately big chocolate companies need to source their cocoa in a way that does not exploit those at the start of the supply chain.”

All profits from the bars will be donated to 100Weeks, an independent platform that uses direct cash transfers and financial training to assist women in escaping the cycle of extreme poverty.

This project and all the others supported by The Chocolonely Foundation work to improve the lives of cocoa farmers and their families on the ground in West Africa, says Shoenmakers.

Transparency is set to be a major theme for 2021, both within and beyond the chocolate sector. For example, Barry Callebaut is now disclosing its direct cocoa suppliers in Côte d’Ivoire, Ghana and Cameroon.