You are in : All News > Beyond Meat eyes European expansion as IPO rumors intensify 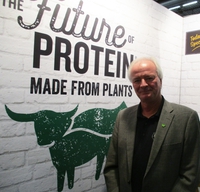 23 Oct 2018 --- Beyond Meat, the highly innovative Californian innovator behind the plant-based alternative burger, Beyond Burger is eyeing a major roll-out in Europe as rumors intensify around an initial public offering (IPO). At SIAL 2018, which is currently taking place in Paris, the company highlighted its partnership with Dutch meat importer Zandbergen. The meat hall at this year’s event is noteworthy for the sheer number of innovative meat alternatives on display to cater to both vegetarian consumers, but also meat reducers or flexitarians.

Beyond Meat has sold 25 million of its “Beyond Burgers” since 2016, according to the company. It recently completed a peer-reviewed lifecycle analysis at the University of Michigan, where the results found that their product used 99 percent less water, 93 percent less land, 46 percent less energy and 90 percent less greenhouse gas emissions than beef. This type of research allows the product to be positioned as a more sustainable alternative amid major discussions around the impact of intensive meat production on the environment.

Los Angeles-based Beyond Meat, which counts Bill Gates and Leonardo DiCaprio among its investors, is working to change the meat we eat by replacing animal protein with plant-based proteins. The company’s mission is “to perfectly build meat from plants, delivering all of its benefits without the downside.”

Last week, CNBC reported that Beyond Meat has hired investments banks for an initial public offering, according to “people familiar with the matter.” The report stated that “Beyond Meat has tapped J.P Morgan, Goldman Sachs and Credit Suisse to help lead the IPO, said the people, who asked not to be named because the talks are private. It could not be immediately determined what valuation Beyond Meat will seek in its IPO.”

Speaking to FoodIngredientsFirst at SIAL 2018 Chuck Muth, Chief Growth Officer would not comment on the stock market launch discussion except to state “it is a rumor.” But he did provide details about the company’s European entry plans and ongoing innovation. Muth confirmed that almost all of Beyond Meat’s business is in North America right now, with the brand particularly present at A&W in Canada. The product is being tested in Hong Kong, for example.

Europe is seen as a “significant growth opportunity.” This provides several platforms for expansion, beginning with foodservice channels. “We are currently planning only on foodservice in Europe but will consider retail down the road. We are currently only available at a few select accounts but before the end of this year you should start seeing it appear at major accounts,” says Muth.

He also confirmed that plans are under consideration for a production facility in Europe. “A lot of it is dependent on our supply chain so that we are able to satisfy our North American market and expand into Europe. We are additionally going to export but in the long term, we are planning to produce in Europe, likely in 2019. We are still under discussion about where the facility would be,” he notes.

Innovation is strong at the company. “We have a hamburger in our fresh line, we launched a sausage link and a hot Italian sausage. We do expect to bring that to Europe sometime in 2019. We have actually moved onto other alternative proteins. We are using pea protein, but in the future, we will be using mung bean, brown rice and potato protein too,” he notes. “We do have an innovation pipeline and will continue to innovate in the animal protein space with plant-based alternatives,” says Muth.

Muth explains that the company started in 2009 and became commercially viable in 2012, originally in the form of a soy-based chicken strip product. They then gravitated to using other protein sources for their “beef” products with a bleeding effect. “In 2016, we launched Beyond Burger which is a product made from pea protein, coconut oil and beet juice which gives it a bleeding effect. That was a game changer for us. It was a phenomenal success in the US and is now available in most major retailers in the US and 10,000 foodservice customers. We are enjoying significant growth year over year. The plant-based meats category is significant and growing, both in North America and northern and western Europe. So there’s a very strong demand for quality,” he says.

The “meat case” in a food store or supermarket is the biggest of all stages for meat protein products. This hurdle has been finally taken, now that plant meat products are sold alongside flesh meat. This can be seen as the beginning of a transformative journey that will ultimately position plant meat foods on the same platform as their animal equivalents.

Muth sees the company as a “disruptor,” that merchandises in the fresh meat space in the US and not the vegetarian space. “We do believe that we are in the disruptive space right now and that is about creating better quality plant-based products that come close to replicating the animal-based products that are in the market today,” explains Muth. “While we love our vegetarian and vegan consumers, our target audience is really meat reducers or flexitarians and those consumers that are looking to reduce the amount of meat they are eating today,” he adds.

Muth, therefore, notes that a large number of their shoppers do consume meat as well. “This is more of an alternative that is not necessarily for consumption every day. The choice is important for consumers is first and foremost the health reasons, but also environmental and concerns about the animals themselves. We see particular strength in millennials in this space,” he says.

Zandbergen is serving as the company’s importer into Europe and the Middle East. Earlier this year, The PHW Group, which also includes the Wiesenhof brand, took over distribution in the German market for the California company.

Adriaan Figee CCO at Zandbergen told FoodIngredientsFirst that their import agreement, which came into effect earlier this year is a big opportunity for them “as we diversify from being a meat company into being a protein supplier.”

“If this [Beyond Meat] is going to be as big in Europe as it is in the US, it will be big. The intention was to diversify and expand our portfolio and add plant-based products and we were lucky enough to be introduced to Beyond Meat,” he notes. “It opens a lot of new doors. People see us differently right now and we are getting into contact with a lot of different clients. It is a commercial big opportunity and as a family business you need to diversify your portfolio to make sure that you don’t become a dinosaur,” he adds.

Currently Beyond Meat will ship their frozen product into the Netherlands, where the beef patties will be thawed and then sold into the meat section itself. “They have done that really well in the US. That is a proposition that is not really common in Europe as yet and I think that is the biggest advantage. It doesn’t just address the vegetarian or vegan market but also the meat-eating individuals of this world,” Figee concludes.

The move is indicative of a larger market dynamic where the meat aisle is becoming increasingly seen as the protein aisle.

18 Nov 2020 --- Beyond Meat has revealed its latest product innovation, Beyond Pork. Designed to imitate the umami flavor, juicy texture and culinary versatility of traditional... Read More

09 Sep 2020 --- Beyond Meat Food Co has secured an agreement to develop and manufacture plant-based meat products, including beef, pork and chicken, under the Beyond Meat brand in... Read More

08 Sep 2020 --- Starbucks is targeting eco-conscious consumers by rolling out more plant-based offerings in selected stores across Asia from this month. The plant-based range... Read More